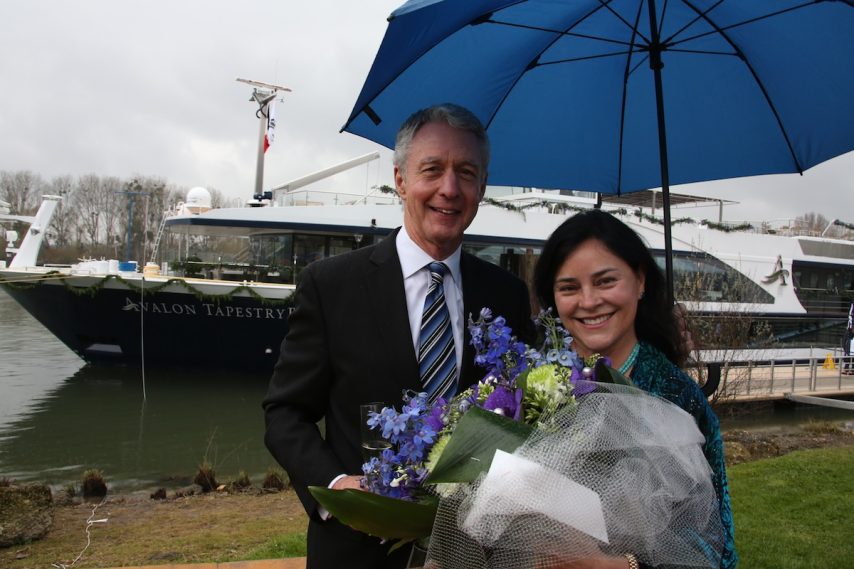 On a rainy day in Les Andelys, in the Normandy region of France, Avalon Waterways made a splash not only with its new, 128-passenger Avalon Tapestry II, the line’s second ship on the Seine, but also by having an impressive ship godmother. Porthole was there as Diana Gabaldon, author of the New York Times–bestselling Outlander novels, christened the new ship.

“God bless this bonny ship and all who sail in her! Rivers are the lifeblood of a country, carrying the commerce and history of its people,” Gabaldon said, before more than 100 invited guests at a dockside ceremony. “We who are chosen to join this great adventure are blessed to be part of the flood of life.”

With Avalon Tapestry II docked below the hillside ruins of Richard the Lionheart’s Château Gaillard, the author then cut a rope sending a bottle of Moet champagne splashing against the ship’s bow.

Gabaldon’s sexy, time-travel novels have 18th-century Scotland as a backdrop, as well as destinations including Paris and Le Havre, France, and are the inspiration for the Starz TV series Outlander.

Avalon’s 10th “Suite Ship,” Avalon Tranquility II, will be christened next week on the Rhine.