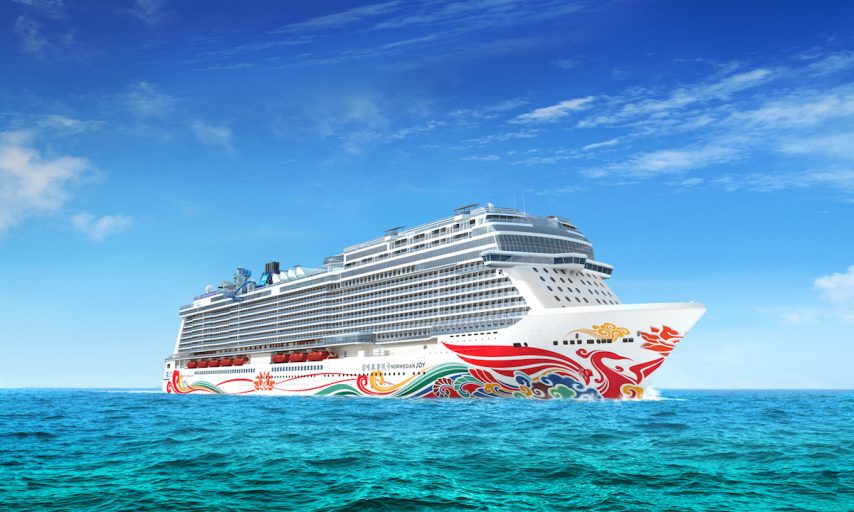 Norwegian Cruise Line announced that it has commissioned renowned Chinese artist Tan Ping to design the hull artwork of its soon to-be-unveiled Breakaway-Plus class ship, Norwegian Joy, which is scheduled to debut in summer 2017. Homeporting in Shanghai and Beijing, Norwegian Joy will be Norwegian Cruise Line’s first ship purpose-built for the Chinese market. Tan’s distinctive artwork underscores this commitment to the Chinese cruise experience.

A painter, printmaker, and educator, Tan’s abstract paintings and copper plate etchings are in the collections of renowned museums including The National Art Museum of China; Portland Art Museum, USA; Ludwig Museum, Germany; and The Shanghai Art Museum. He also led and directed a team of designers from Central Academy of Fine Arts to complete the 2008 Beijing Olympic Games Image and Landscape Design Project.

Tan’s subject for Norwegian Joy is the phoenix, an iconic mythical bird believed to reign supreme over all birds of the world. It is a ubiquitous motif in Chinese art and can be found throughout the centuries in paintings, silk brocades, architectural flourishes, and more.

“The phoenix symbolizes beauty and good luck in Chinese culture, and Norwegian Joy will bridge across the West and the East and bring Chinese people’s best wish to the world and everyone in her path,” said Tan, whose modernistic design is simple, yet graceful, as flowing lines simultaneously convey forward movement and majestic poise.

The hull artwork’s color palette is dominated by red and yellow, traditionally the two most regal colors in China. Red signifies joy, a perfect match for a ship of the very same name. Yellow represents grandeur, the feeling that a ship of this size evokes in those who see it. The design also includes hints of blue, signifying the sea. These three colors are also primary colors, the starting point for all other colors in the spectrum of visible light. Through this subtle reference, Tan conveys the sense of an auspicious beginning to an unforgettable voyage.

“Tan Ping’s ability to design concepts that easily blend traditional Chinese culture with moving and changing aspects of life is inspiring,” says David Herrera, President, Norwegian Cruise Line China. “He has perfectly captured the feel of Norwegian Joy as a luxurious, technologically advanced ship while honoring traditional Chinese values. The hull art embodies the essence of the best of The East meshing perfectly with the best of The West.”

Norwegian Joy will see the vision of the phoenix artwork transferred to a medium of enormous scale on the hull of this unique ship. “This design is by far my largest artwork,” says Tan. “Traveling worldwide on Norwegian Joy, I also expect that it will reach a far greater number of viewers than any of my previous works.”