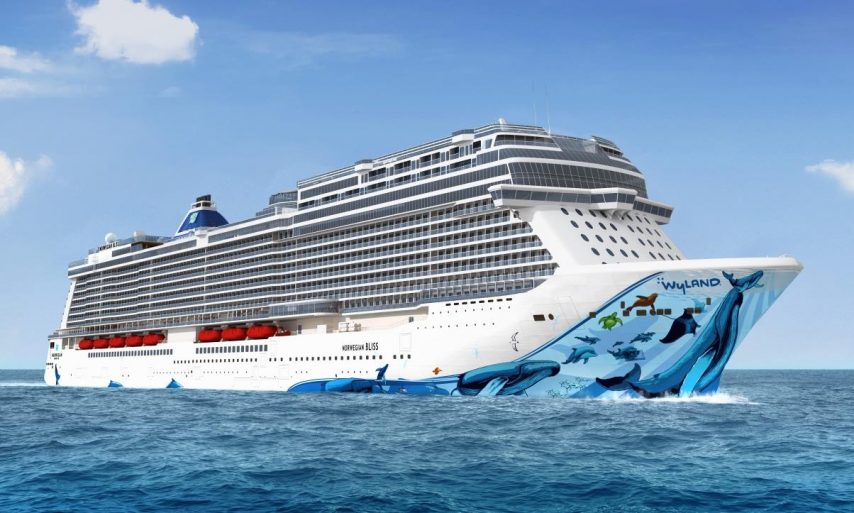 The ship, which is being custom-built for cruising in Alaska, will boast hull artwork by Wyland titled “Cruising with the Whales,” prominently featuring a humpback whale and calf as well as sea creatures including sea turtles, a pelican, an albatross, and bottlenose dolphins. (Wyland is also drafting a whale tail for the back of the ship that is still to be determined.)

“It’s been a great tradition to be able to partner with incredible artists and it took less than a second to figure out who was the only possible artist who could design a piece of artwork that could live in Alaska,” said Stuart. “It goes beyond just art on the side of ship. We’re very much aligned in how we think about conservation and preservation of the ocean and the long-term sustainability of the oceans on which we sail.”

Wyland joked that for an artist who likes to drive around looking at empty buildings as canvases, now he has the opportunity to paint on the most perfect canvas — on the side of a ship.

“I hope my art inspires people to see the beauty in nature and hopefully work to preserve it,” said Wyland, who has drawn on 30 years of experience diving around the world to paint more than 100 ocean murals throughout the United States and 18 other countries. “If you like to breathe, than you probably want to protect the ocean, because every second breath you take comes from the ocean.”

The 4,000-guest Norwegian Bliss will be available for reservations beginning January 2017.

PortholeTV has an exclusive look at the unveiling event

PortholeTV was on hand to capture the unveiling of Norwegian Cruise Line’s newest hull artwork by marine life artist Wyland for its upcoming ship, Norwegian Bliss.
The new ship, which is being purpose-built for cruising in Alaska, will homeport in Seattle when it debuts in June 2018.