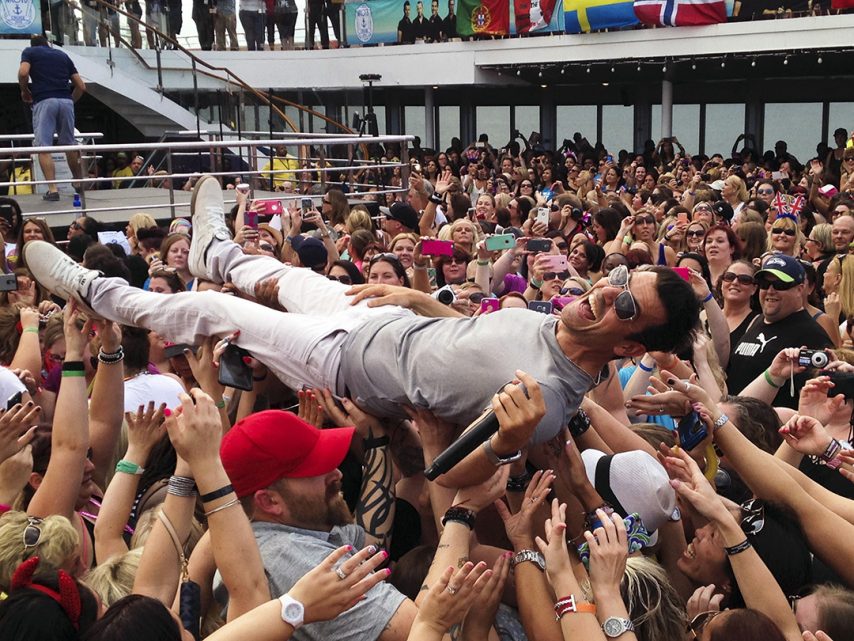 We stood on the crowded Lido Deck, the hot Miami sun overhead, squinting as we looked around for the first sign of a New Kid. Any New Kid. All the New Kids.

New Kids on the Block (now NKOTB) debuted as a boy band from Boston in 1986, when gazillions of teenage girls like me fell in love with Donnie Wahlberg, Joe McIntyre, Jordan Knight, Jonathan Knight, and Danny Wood, who quickly became known for their dance moves and classic hits such as “Hangin’ Tough”, “The Right Stuff”, and “Step By Step.”

Now, nearly 30 years later (whaaat???), this man band is still rockin’ it — especially on the high seas. So when the 7th annual NKOTB cruise was announced, my BFF of 30 years and fellow groupie, Emily, and I knew we would NOT miss it this time.

As anyone knows, each “Blockhead” is essentially defined by the guy she likes. So when Emily (a Joey girl) and myself (a Donnie) boarded Carnival Victory in Miami bound for Grand Turk, we were overcome with excitement and anticipation for the upcoming days that would be spent with our all-time favorite band. (Squeeeeeeeallllll!!!)

Setting the Scene
Despite our inner-13-year-old enthusiasm, we actually came on board with low expectations. We didn’t want to disembark disappointed, so we convinced ourselves that even if we didn’t meet them, touch them, or even get close enough to smell them, this cruise will still be awesome. There’ll at least be a concert, plus four days away from real life with plenty of time to relax, catch up, reminisce, and laugh. What could be so bad?

As we stood in line waiting to check in, going over our “go with the flow” strategy, several security guards suddenly stopped the line, closed the doors, and scanned the scene. Trying to figure out what was going on, we asked questions to our newfound security guard friend who told us that Danny and Jon were arriving.

The strategy was already working, as were lucky enough to be in the right place at the right time. A high five from Danny and a hug from Jon as they passed, and we knew this was going to be a cruise to remember.

Once we were on board and sailing away — it’d get even better.

Standing on the Lido Deck waiting to see what would come next, we heard the ship sound its horn as we began to pull away from port. Then, an almost ominous voice — that of Donnie Wahlberg — came on over the intercom, instructing the crowd to look at the giant poolside movie screen and repeat after him: . . .