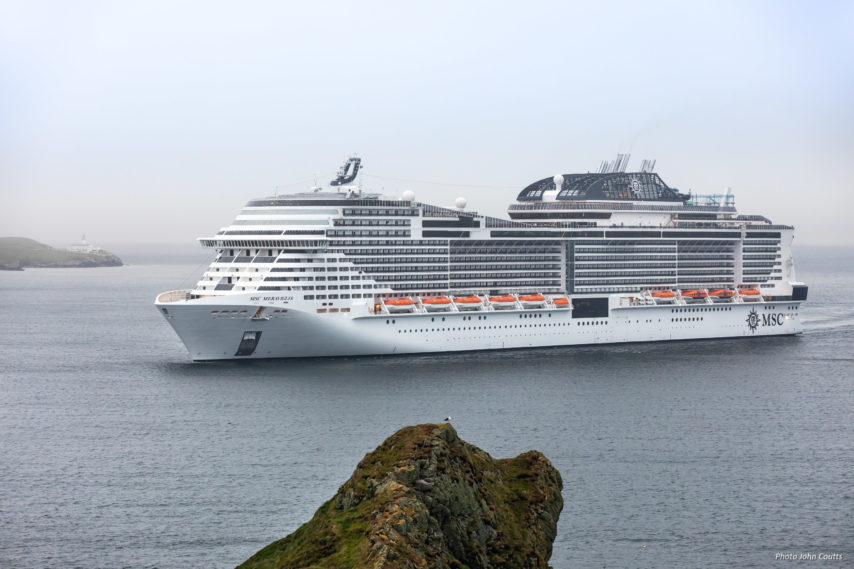 When MSC Cruises first launched MSC Meraviglia in September of 2016, even those at the world’s largest cruise ports marveled at her size. With a capacity of more than 5,000 guests and 1,500 crew while weighing in at 171, 598 tons, she was the 4th largest cruise ship in the world upon her launch.

Resting around 170 miles north of the Scottish mainland, the quiet port of Lerwick, Shetland Islands isn’t known for its excitement, but that all changed with the arrival of MSC Meraviglia into port on July 31. 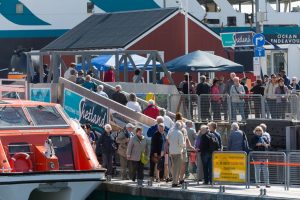 Port of Lerwick issued a press release prior to the arrival of MSC Meraviglia into port, stating that the population of the port was set to double upon her arrival. The population of Shetland as a whole is only 23,000 inhabitants.

MSC Meraviglia is not the only ship in port, either. Hapag-Lloyd’s Europa 2 is also visiting Lerwick, but the port is ready for the influx of visitors according to Victor Sandison, Lerwick Port Authority’s Senior Commercial Executive.

“Our involvement with the cruise sector just keeps getting bigger and better, with larger vessels and higher numbers,” he said. “This season, we expect to welcome 93 ships and approaching 93,000 passengers in an all-round record year, with 119 vessels, bringing an anticipated 110,000 passengers, already booked for 2019.”

Lerwick, a port in the Shetland Islands, along with other settlements in the area have a long standing seafaring history. The region was frequented by vikings and human history on the island can be traced back nearly 3,000 years.

An event like MSC Meraviglia is quite notable for the people of Lerwick, who no doubt stood in awe of the ship and her 15 decks, water slides, ropes course and theater featuring Cirque du Soleil shows.