Raul Bonachea and his family booked a cruise thinking it would be a great vacation. They had no idea just how great it would be. When MSC Cruises first began sailing in 2003, the world’s largest privately owned cruise line had lofty goals. This week, the cruise line announced they had hit a major milestone in the industry with their 20 million passenger on board for a cruise and that passenger was Raul. The mark was reached on board one of MSC’s newest ships, MSC Seaside.

To honor Raul and celebrate the milestone, MSC Cruises upgraded the family to a luxury Yacht Club suite which included an elevated ship-within-a-ship experience complete with a private restaurant, pool and lounge as well as 24-hour butler and concierge service.  MSC Seaside also hosted a 20 Millionth Guest Party on Sunday, June 30 in the ship’s atrium, the social hub of the ship. The celebration was bubbling with complimentary champagne for all guests, a special officers’ parade, an artisan cake and a special performance from one of the ship’s most popular shows. The Captain joined the celebrations and toast, offering congratulations and a special gift for MSC Cruises’ 20 millionth cruiser. 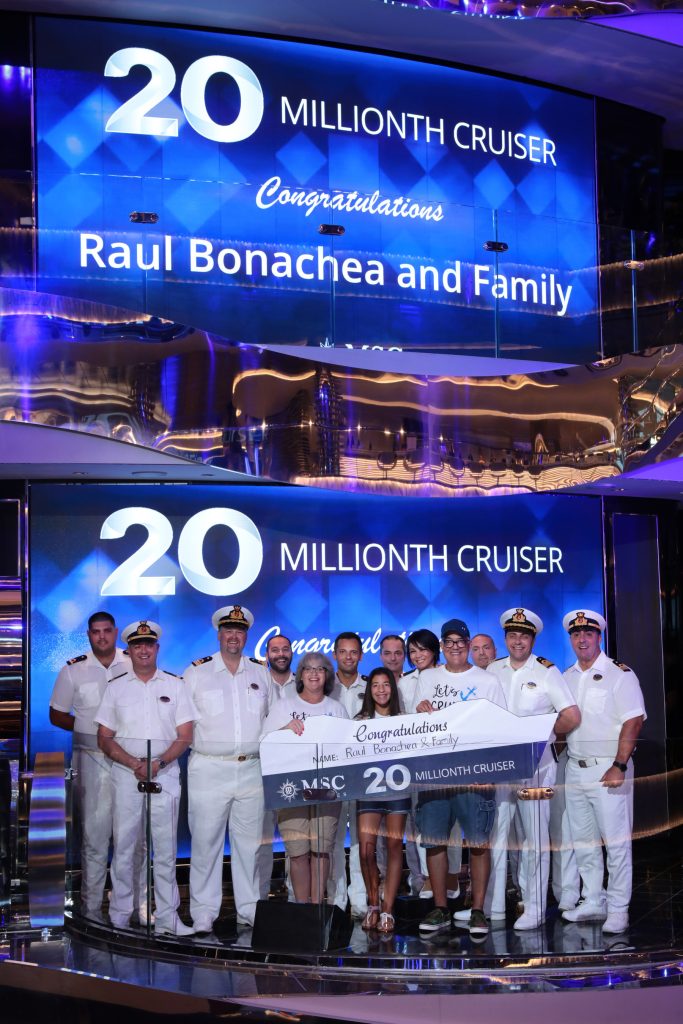 It’s only been 16 years since MSC Cruises first began and in that time they’ve introduced 16 new ships. In 2019 alone, the company will have launched two new ships — MSC Bellissima in March and MSC Grandiosa in November along with a new private island resort called Ocean Cay Marine Reserve.

Gianni Onorato, CEO of MSC Cruises explained that things are just getting started for the Swiss-based cruise line.

“Reaching our 20 millionth cruiser is truly a milestone achievement for MSC Cruises, and a representation of how far we’ve come while building a global brand that serves guests from over 170 nationalities across five continents,” he said. “With our capacity set to triple by 2027, we will continue to raise the bar in two main areas, on board and ashore, offering our guests a unique experience each time they sail with us. MSC Seaside is the perfect example of this: she is one of the most innovative ships at sea in terms of design as well as onboard experience. She also features the latest and some of the most innovative environmental technology at sea.”

In order to become the world’s fastest growing cruise line, MSC needed two things: ships and passengers. Looking towards the future, the line should have both of those things in spades as the plan is to expand the fleet to 29 ships by 2027. North America remains a focus for the line as four ships will call PortMiami home.

Have you cruised with MSC? Let us know what you thought in the comments below!