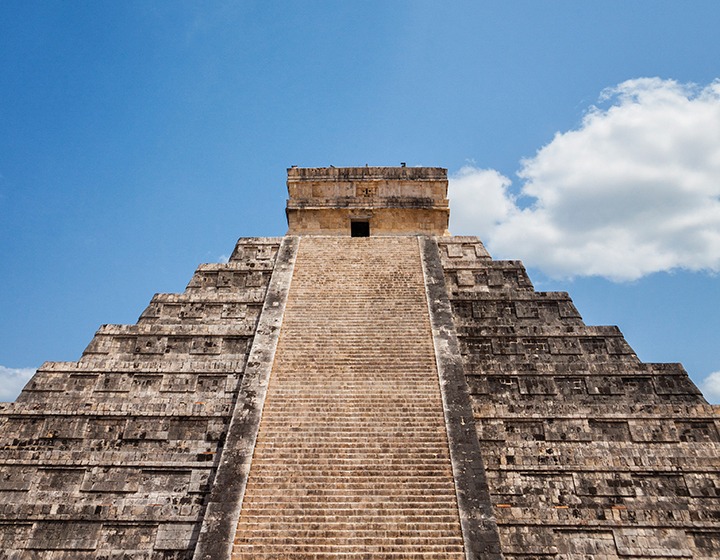 If Walls Could Talk: Mexico’s ancient ruins tell tales of the past

Mexico offers history and adventure in many forms. One of the most popular is exploring archaeological sites for a unique lesson on Mexico’s past. Cruise passengers can select from a multitude of sites in numerous ports of call that offer opportunities to climb pyramids, swim in cenotes, and learn about chocolate, ancient calendars, and the contributions of ancient civilizations. From the Atlantic to the Pacific, each site gives visitors a different look into the country’s magical and mysterious history.

The island of Cozumel has Mayan roots and one can discover them inside Chankanaab Beach Adventure Park. But for those who want to walk among actual ruins, passage to the mainland is required via a ferry service to Playa del Carmen where visitors can take a bus or car to Tulum, Coba, or Chichen Itza.

Tulum, the closer and more popular of the sites, may not hold the most impressive architecture or significance to the Mayan civilization, but it was one of the only inhabited Mayan civilizations recorded by the arriving Spanish in the early 1500s.

The walled coastal city offers a look into the later period of the Mayan civilization, but for many visitors, the actual edifices are hardly as memorable as the ocean views from the cliffs and the chance to swim on site. With beach access, you can refresh and escape the hot and humid Mexican climate with a dip in the sea.

The Mayan site of Coba includes 30 minutes more travel time (each way) but you’ll be rewarded with more to explore and even shade (a rare commodity at Mayan archeological sites) as 90 percent of the site remains untouched by excavation. The once large commercial center tells its history through large carved stones known as stelae. Highlights include a ride in a “Mayan taxi” (a modern-day bike/rickshaw transport) and the chance to take on an adventurous climb to the top of the tallest pyramid in the Yucatan, Nohoch Mul. The challenging climb is celebrated with an impressive 360-degree view of the jungle.

Many consider Chichen Itza a must see, even a bucket list destination. A UNESCO World Heritage site and an iconic symbol of Mexico, it is considered one of the new Seven Wonders of the World.

Originally settled by Toltec warriors, Chichen Itza is one of the most visited archaeo logical sites in Mexico. It held enormous significance as a ceremonial and astronomical center and its impressive pyramid, the Temple of Kukulkan, includes 365 steps (one for each day of the year). On both fall and spring equinox, the steps showcase a shadow of a feathered serpent slithering down the steps.

Other must-sees inside Chichen Itza include the Temple of Warriors, The Plaza of a Thousand Columns, the largest Mayan ball court in the Americas, and the Sacred Cenote.

From the port of Progreso, the Mayan sites of Uxmal and Dzibilchaltun can be selected as excursions from most cruise lines.

For those interested in a short excursion, Dzibilchaltun is less than 30 minutes from the pier. This smaller site includes an inside museum and the nearby Cenote de X’Lacah for a refreshing swim. This small commercial place for the Mayans offers just a taste of their world.

Cruisers prepared to make it a full-day excursion can take a longer (100-minute) bus ride to Uxmal, where….