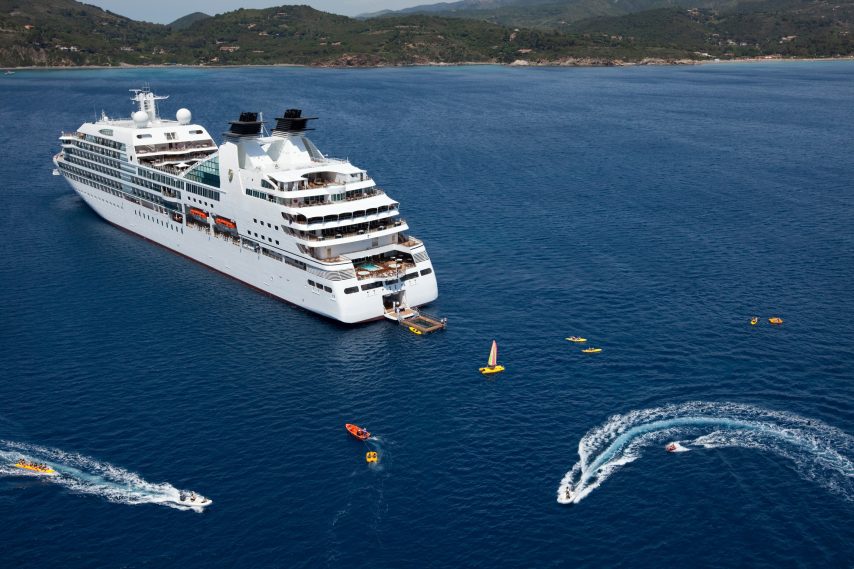 Only parents of two young children would look forward to a 10-hour flight. Hours with nothing to do but read, sleep, and plan out the adventures that were ahead of us once we landed in Rome. It had been 10 years since my husband, Steve, and I had been away together — alone — for more than a night or two. The 2001 honeymoon, incidentally, was our very first cruise.

Now, with dozens of cruises under my belt, I seized the opportunity (or should I say, I wrestled it to the ground?) to head for the Med to board the new Seabourn Quest. From Rome (Civitavecchia), we would embark on a 3-night preview cruise to Monte Carlo, with a port call at Le Lavandou, France, along the way.

The third ship in Seabourn’s Odyssey class, Seabourn Quest debuted in June 2011, nearly a clone to sisters Seabourn Odyssey and Seabourn Sojourn, which debuted in June 2009 and June 2010 respectively. The 32,000-ton, 450-passenger ship is three times the size of the class’ predecessors (Seabourn Pride, Spirit, and Legend), but carries just twice as many guests, making it just as intimate and exclusive so that you feel the ship is your own.

I couldn’t wait to get on board and experience the yacht-like ambiance I’d heard so much about. And along the way, Steve and I would make the most of our time in the Med. It might be another 10 years until these travel stars align again. Clearly, every second counted.

When in Rome…Eat Pizza and Gelato

We had a pretty simple checklist for our 24 hours of pre-cruise time spent in Rome: Ditch the diet and indulge in Italy’s flavorful cuisine. Ok, there is more to life than eating (I guess), so this mission, of course, would be sprinkled with other must-dos in the Eternal City.

We mapped out the route for our precious time and hit the ground running, first making a beeline for the Spanish Steps, which were a short walk from our hotel. We snapped a few photos, looked around (a la Clark Griswold and his family seeing the Grand Canyon in National Lampoon’s Vacation), and then continued on toward Via Condotti, one of the most famous high-end shopping streets in the world. Luckily for Steve, I’m not really a shopper, so it was enough to just admire the big names like Gucci, Valentino, Hermes, Burberry, and Dolce & Gabbana from their windows.

After a quick slice at the first pizzeria we encountered, next up was the Trevi Fountain, where we spent 47 seconds of bliss, admiring the famous site. The crowds wouldn’t allow us to get close enough to throw a coin in, so we snapped some more photos and did a pivot turn toward the gelato shop.

This was about the time when a light drizzle turned into pouring rain and herds of tourists found shelter under store overhangs. I tried to see the romance in it all and not let it damper the day’s walking tour. We couldn’t go back to the hotel. We were in Rome! So we hopped in a taxi and headed to The Colosseum. Rain or shine.

After easily snagging two umbrellas from a local hawking them at the entrance, we were on our way. Suffice it to say, walking around such a significant historical site as The Colosseum was awe-inspiring. It was like stepping into a photograph that we’d seen hundreds of times — on postcards, in books, on TV — and imaging what it could possibly have been like sitting in the marble seats and watching gladiators fight to their deaths. We hardly noticed that the rain had stopped by the time we exited the medieval walls, making a major check to our bucket lists.

The next day, with just a few morning hours to spare before catching a motorcoach to Civitavecchia to board Seabourn Quest, we squeezed in a quick stroll through Villa Borghese, one of the largest public parks in Rome. The expansive space boasts 148 acres of wide shady pathways, temples, beautiful fountains and statues, and several museums. It was perfect place to relax, recap, and reflect on our amazing time in Rome….