The ships couldn’t be more different, but the return of the Mardi Gras name to Carnival’s fleet may just bring revolution and renaissance to the line and industry all the same. 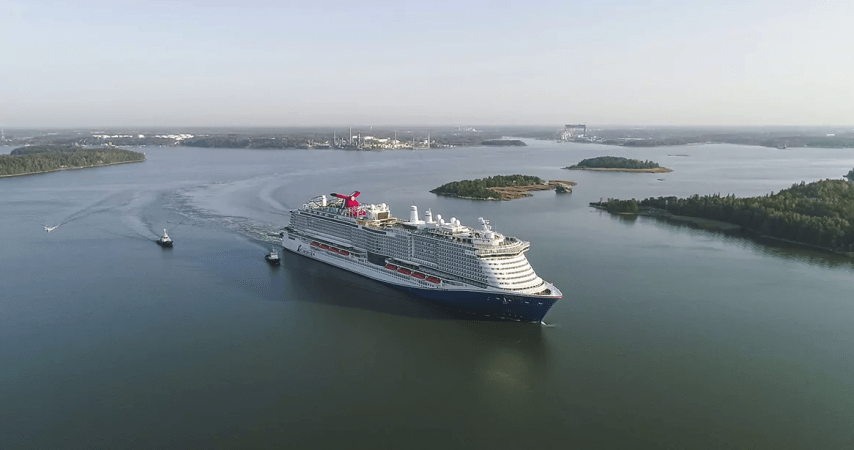 Who could have possibly known that when the original Mardi Gras embarked on March 11, 1972, it and its sister-ships would revolutionize the onboard experience, propel an upstart line into a cruising behemoth, perfect the paradise-probing possibilities the world over, and basically change everything this planet knows and loves about 71 percent of its surface?

Who could have known, you ask? Probably not those aboard the maiden voyage, because shortly after it sailed away on March 11, 1972, Mardi Gras ran aground.

Despite that immediate tumble out of the gates, Mardi Gras truly did send the cruise industry on a trajectory no one could have imagined, all the more poetic as  But just as the industry boomed once it escaped that sandbar in the ’70s, the sky is the limit on the new Mardi Gras and the industry waiting with bated breath to welcome it.

Before it became a Fun Ship, Mardi Gras was known as Empress of Canada, a 27,000-ton transatlantic liner for Canadian Pacific Line. In early 1972, Ted Arison, founder of the fledgling Carnival Cruise Lines, purchased the ship fully aware of the substandard tourist-class accommodations and various infestations within, but he was determined to make wake as soon as possible and deal with those inadequacies along the way. Larger than any other ship sailing out of Miami and with cabins priced much cheaper than the competition, Mardi Gras was drawing plenty of attention before it literally hit the ground running that fateful March day.

Headlines — and drink menus — would proclaim “Mardi Gras On The Rocks,” but its false start feels almost apt alongside the other stories that abound from Mardi Gras’ earliest days. On that inaugural cruise/grounding, there was the immediate declaration of an open-bar … then, once the ship was free and deemed safe to continue on to San Juan, there was the execs having to pull coins out of slot machines to cover the fuel costs home. On ensuing cruises, it was the construction and maintenance miracles happening amidst a non-stop party atmosphere, a spirit that no doubt infiltrated the structure and altered the very DNA of a ship already proving that cruising needn’t be forever formal or strictly stuffy. Ultimately, it may be the combination of oft-repeated anecdotes and untold if-these-bulkheads-could-talk legends that make Mardi Gras the storied ship it is in Carnival and cruise industry lore.

Mardi Gras left Carnival’s fleet in 1993, cruising for other lines and charters before eventually being sold for scrap in 2003. There won’t be a ceremonial “Meeting of the Mardis” when the newer namesake debuts this year, but perhaps that’s for the best. On paper or in port, the original just can’t hold a candle.

Beyond just an overall size advantage — 180,800 tons, or more than six times the original — the newer, larger Mardi Gras actually knows how best to use it.

For starters, Mardi Gras will become the first liquefied natural gas (LNG) powered ship in the Americas when it debuts. It will also have a more solid foundation of its French Quarter roots than its predecessor. From the Emeril’s Bistro 1396 eatery to Big Easy bars like The Brass Magnolia and Fortune Teller, Mardi Gras is the closest you can get to NOLA on aqua. And the French Quarter is only one of its Zones. In fact, the new Mardi Gras has a half-dozen themed Zones in which cruisers can fully absorb a spirit or vibe. A Fun Ship, but with focuses.

The La Piazza zone boasts Italian flavors like the family-style Cucina del Capitano, the 24-hour Pizzeria del Capitano, and incomparable Mediterranean atmosphere. Elsewhere, the Grand Central Zone offers the natural buzz of an atrium and adds cafes, dining spots, and first-class entertainment into the mix. The Lido zone ensures that cruisers are getting more than afterthoughts on a top-deck; in addition to its RedFrog Tiki Bar and Guy’s Burger Joint, Mardi Gras cruisers can experience newbies like Big Chicken, a chicken joint brought to sea by Carnival CFO (Chief Fun Officer) Shaquille O’Neal. The Summer Landing zone brings the chill (with the poolside Watering Hole and nearby Guy’s Pig & Anchor Smokehouse / Brewhouse) while The Ultimate Playground zone brings the thrills, encapsulated most excellently with BOLT, the first rollercoaster at sea. And while cruisers climbing out of their ’70s time capsules would be content with a magic show or adult comedy performance, this Mardi Gras elevates entertainment to include Family Feud Live and all-out musical productions.

As for the cabins and accommodations on this Mardi Gras, it’s simply not fair to compare to yesteryear. Today’s Havana staterooms and suites (with members-only access to the Havana Bar & Pool) and Cloud 9 Spa offerings (with Elemis accoutrements and unlimited access to the thermal suites) might make the original Mardi Gras want to go back and actually re-bury its head in the sand.

The cruise industry of 1972 is about as different today as, well, the magazine industry and how you’re reading this. Yet through the hurdles, hardships, and runnings-aground, there has always been a horizon to set sights upon and, with any luck, eventually blow right past.

And fortunately, there’s always a Mardi Gras to party on along the way as well.