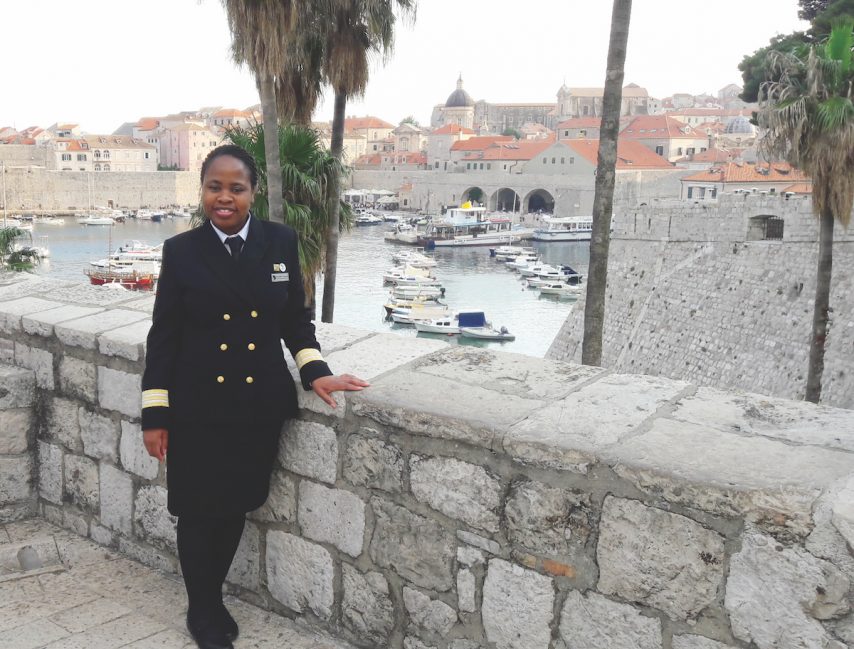 “I am the go-to person to make guests happy,” she says.

Sibanda has an officer’s uniform with three stripes and what she says is the “nicest office on the ship.” Her goal is to get promoted to hotel director and add another stripe.

As a kid growing up in the landlocked city of Bulawayo, the daughter of a nurse and a businessman who operated public transportation minivans, Sibanda caught the hospitality bug early.

“Since I was 12 years old and starting doing home economics in school, I was always passionate about the hospitality industry,” she says. Going to secondary school near Victoria Falls, arguably the world’s greatest waterfall, enhanced her interest in tourism.

With troubled times in Zimbabwe, her family emigrated to Ireland. In Galway, Sibanda ignored her mother’s advice that she become a doctor and instead graduated top of her class in hotel school before going on to graduate school.

Fresh with a master’s degree in corporate strategy and people management, she found herself answering a cruise line advertisement and taking a job as a waiter on the old Seabourn Spirit. Opportunity to travel was part of the attraction, but she also liked the idea of paying her dues before rising up the ladder.

“When I joined the company, I had never seen such high standards of service before,” she says. “I went, ‘Oh my god, wow.’ This was a whole other level.”

As a waiter, she showed a great concern for guests, such as the time she realized, after leaving the table, that she had poured the wrong sauce for a woman with food allergies. “I had to run through the dining room and say ‘I’m sorry,’ and grab the plate,” she says. “But she was okay. She loves me.”

It took her less than two years to get….