Make Hamburg Cruise Days the Highlight of Your Next Vacation 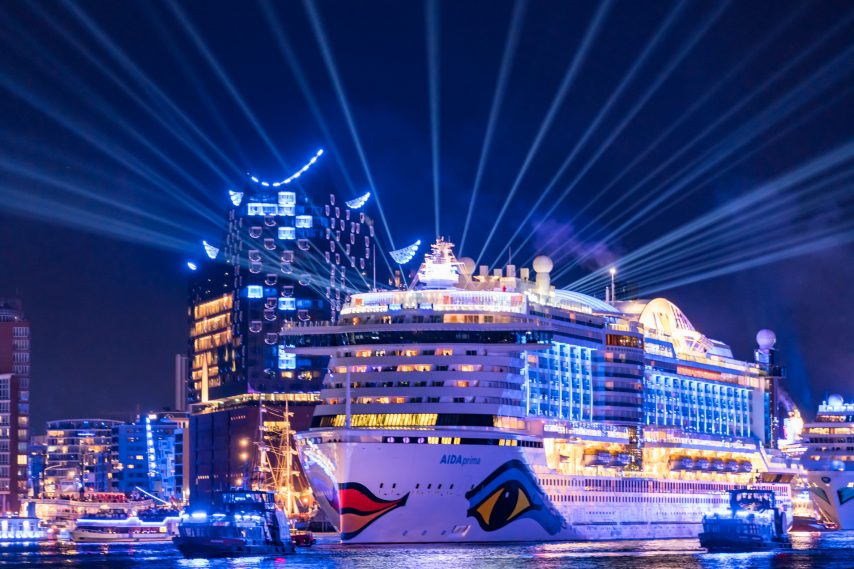 When it comes to exploring Germany’s second largest city, you’re going to need a boat. Hamburg has a rich history, one which cannot be told without perhaps the most important aspect of its geography, the Elbe River. For nearly a thousand years, the river played a critical role in Europe establishing borders and offering economic opportunities for those who lived in the region. Today, the port is the most important cruise port in all of Germany. The city offers more experiences than any other port in Europe and most attractions are within walking distance or a short ride from the cruise ship docks.

The Hamburg and the Elbe River is home to one of Europe’s biggest cruise events, Hamburg Cruise Days, a celebration of the city’s maritime history. Cruising from Hamburg is always a treat, but coming to the city during the Cruise Days celebration is an experience every cruise enthusiast should have on their bucket list.

Everywhere you go in Hamburg, the Elbe is there. As the river approaches the city, it splits into two paths: Süderelbe and Norderelbe (South and North). The way the river splits and comes back together once past the city gives Hamburg an almost island-like feel where bridges and canals are a part of navigating everyday life. 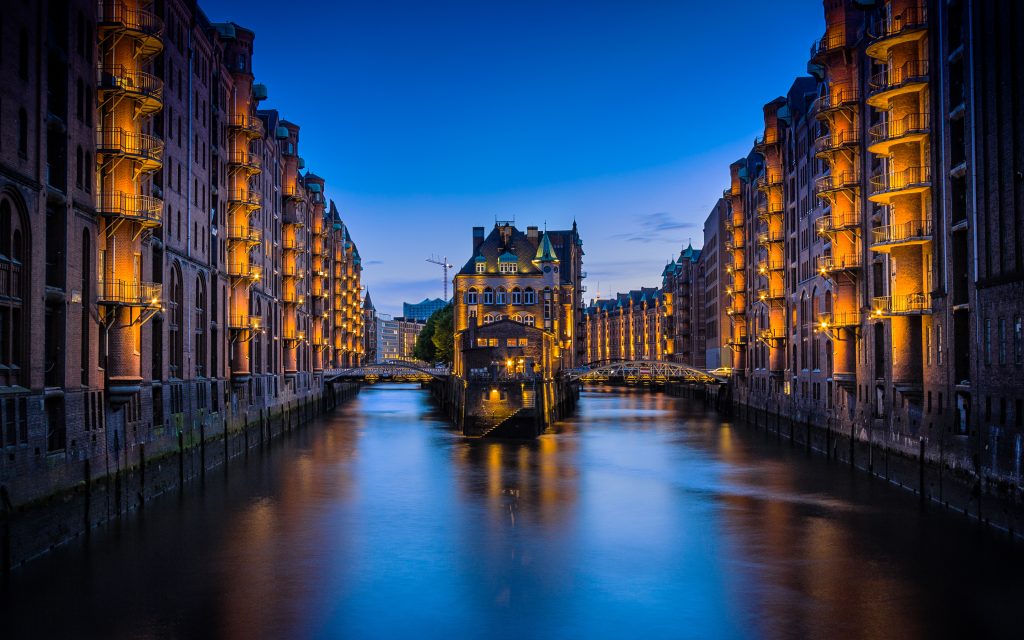 The canals of Hamburg’s Speicherstadt district

Hamburg’s position on the Elbe led to its position as a Hanseatic City, meaning it joined with other cities in Northern Europe during the time period to establish a trade alliance and bolster economic growth. The warehouse district, known as Speicherstadt, is recognized as a UNESCO World Heritage site and pays tribute to Hamburg’s history of liberal and independent trade.

Through it all, Hamburg continued to thrive thanks to its location on the Elbe. Today, the port is the third largest in Europe and the city is a center for economics and trade because of it. Tourism draws millions of people to the city each year and many are coming as part of a cruise vacation. A record 220 port calls and close to 1 million passengers cruised through the city in 2018 and the city expects 2019 to bring even more. Since 2015, Hamburg’s cruise business has grown by 76%!

Ask any resident of Hamburg what the color of the city is and you’ll probably get the same answer; blue. When Germany hosted the 2006 Soccer World Cup, local artist Michael Batz was asked to install his well-known light art installations around the city harbor. After the sun goes down, the port glows bright blue thanks to lights installed along pathways and on bridges, placed outside of buildings and along the light poles. The Elbphilharmonie concert hall, which has seen 10 million visitors since opening in 2017, is also illuminated in blue. The hall has been a major tourism draw for the city since its opening. 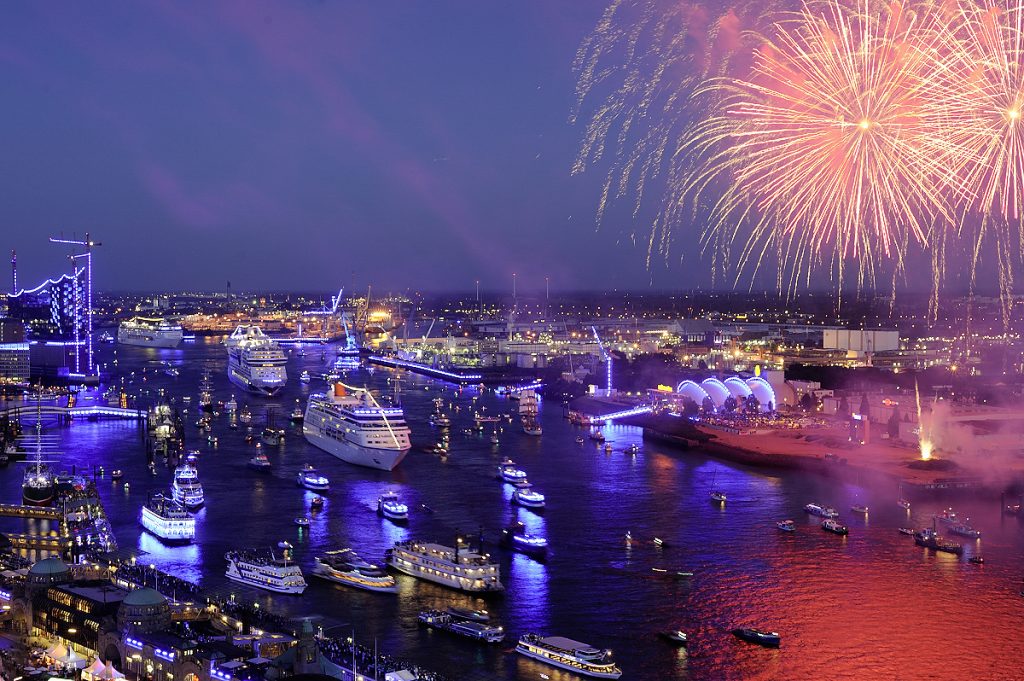 The idea was to represent the Elbe River, which is the dominant geographic feature in the city. The result is a gorgeous display that offers the perfect setting for the Cruise Days celebration. The lights go on a week before the official start of Cruise Days and eventually the whole waterfront is a radiant blue.

What makes Hamburg Cruise Days even more special is the event is only held every other year. This year, the event will take place September 13-15, 2019 and everyone is encouraged to attend. Organizers are particularly excited for this year’s celebration as there will be 12 ships calling on the port over the three day stretch. The port is full of fun and excitement during the event with some of Hamburg’s best restaurants, musicians, artists and more joining in on the festivities. 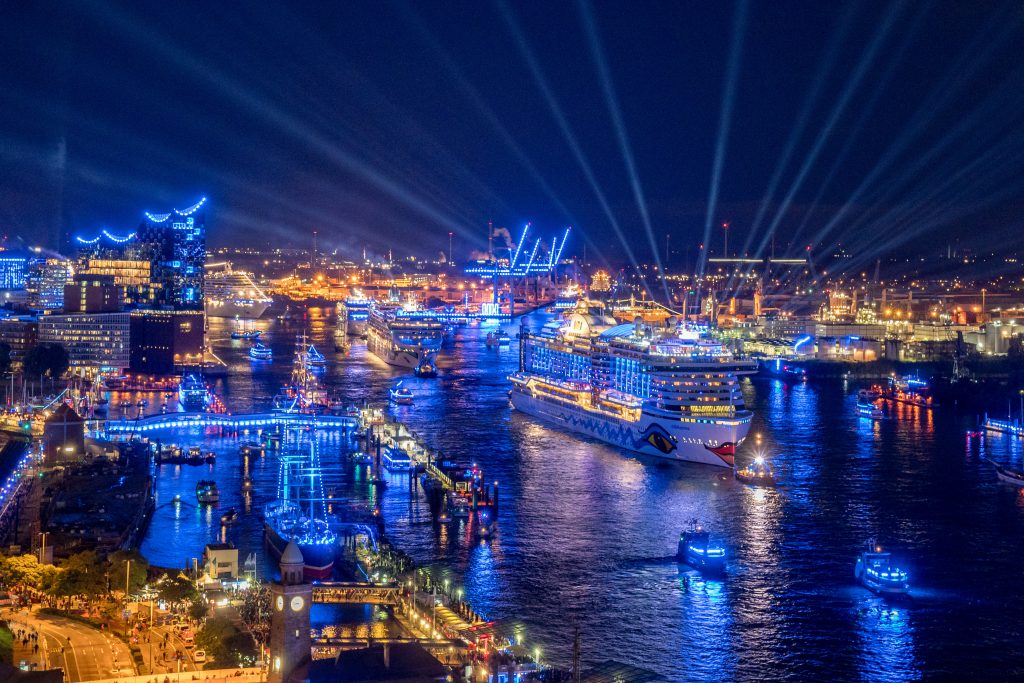 One of the most popular events is the Cruise Days Parade on the evening of September 14th, when a parade of cruise ships sail the Elbe River through Hamburg on their way to the sea. The ships are adorned with blue lights which sparkle against the backdrop of the city. Thousands line the river banks to watch and wave as the huge ships pass by. This year, the parade is lead by AIDAperla, The EUROPA, MSC Preziosa, Mein Schiff 4 and World Explorer. 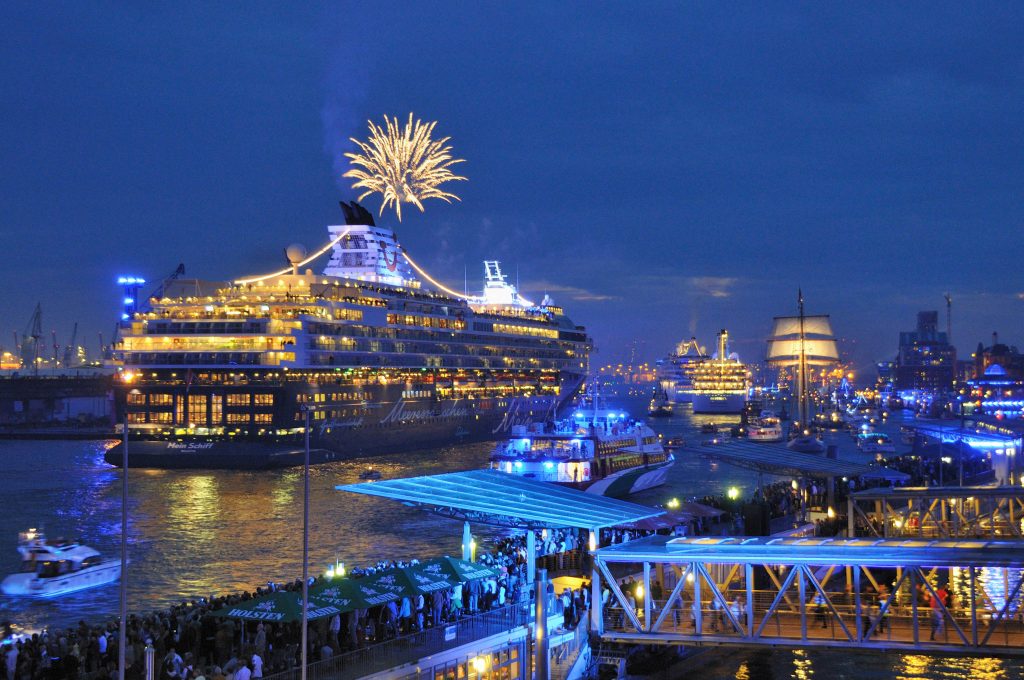 The city of Hamburg is one of Europe’s most underrated cities, particularly for cruisers. The Hamburg Cruise Days celebration is as unique an event as you’ll find in the cruise industry and is a must-see for those who love to explore new things.

Have you cruised to or from Hamburg? Let us know what you thought of the city in the comments below! 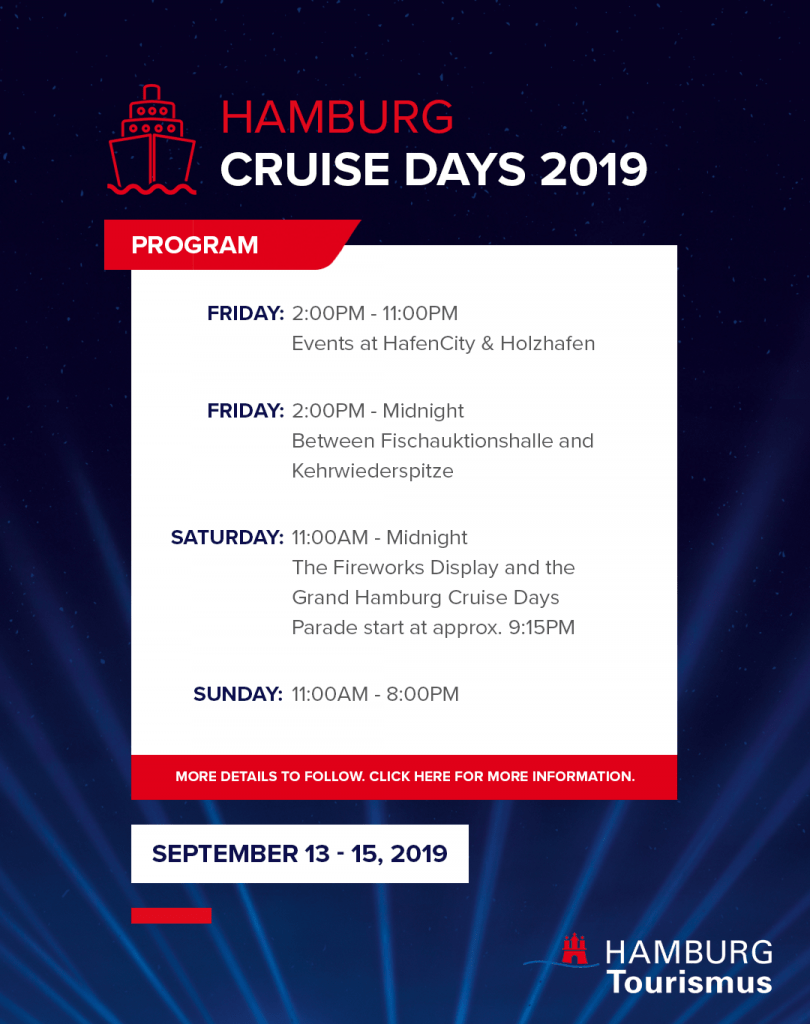