Made in China Part 2: The Terra-cotta Warriors 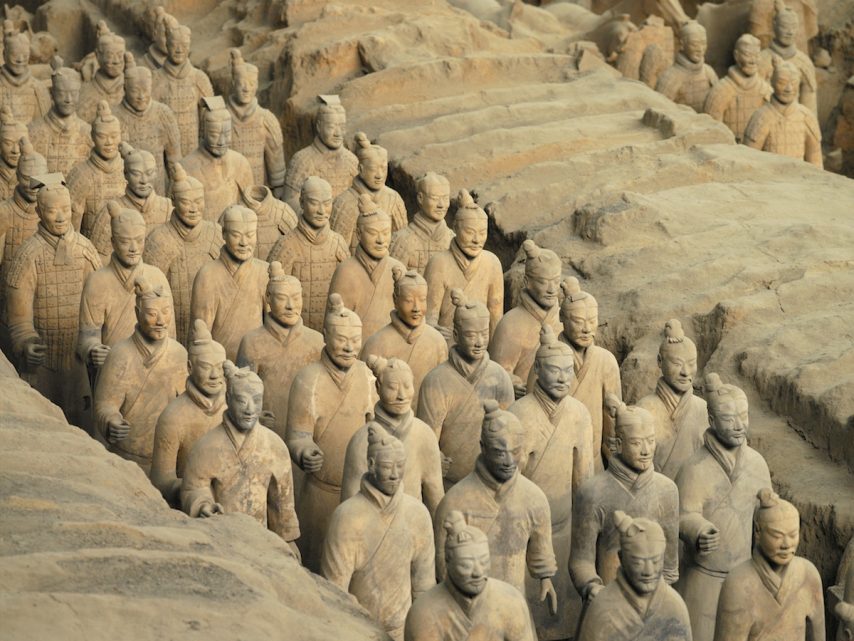 China’s initial capital, Xian, with a population of over 8 million today, was for centuries a bustling yet virtually unknown metropolis. Then in 1974, it burst onto the burgeoning stage of Chinese tourism with the happenstance discovery of over 8,000 terra-cotta warriors buried on a rural farm.

Archaeological research indicates that in 246 B.C.E., Emperor Qin Shi Huang ordered the creation of this larger-than-life faux army of clay soldiers, horses and chariots. Seven hundred thousand men toiled for forty years, arranging the fantasy force in wartime defensive poses to stand guard over the emperor’s tomb in preparation for the afterlife. The entire army, along with actual weapons, was then buried in the trenches with a lattice roof of thatch covered by 6 feet of dirt, where they lay in secret silence for over 2,700 years.

Regarded as one of the greatest discoveries of the 20th century, portions of the estimated 8,000 soldiers, 130 chariots and 600 horses have yet to be excavated, but large, accessible pits already reveal a great deal of this fascinating spectacle. Each individual figure differs in facial features, expression, and clothing, making the experience of seeing them even more awe-inspiring.

Visitors can fly into Xian from all major Chinese airports; however, a far more enjoyable experience is traveling via the country’s bullet train. For Yangzi River cruise passengers, a pre- or post-cruise diversion is easily arranged from the port city of Chongqing.

You may be a strict DIY tourist, but it’s highly recommended to acquire a private guide in advance to explain the complex history of this exceptional attraction. We realized the intricacies involved, and for us, arranging transfers and a detailed itinerary with an exuberant and always smiling Phoenix Fan (PhoenixChinaTour@163.com) was a wise choice.

Staying within Xian’s old city, visitors have access to five-star accommodations for amazingly reasonable rates. Evening pedestrian wanderings are encouraged in the Bell Tower area and the adjacent Muslim Street food market provides a people- and food-watching spectacle beyond description.

The negative undertones of the “Made In China” phrase are subverted by a forward-thinking, positive twist when applied to modern-day China. The country is turning heads with its tourist appeal and rightly deserves its share of consideration for your next vacation adventure.

— Steve Leland is a cruise veteran with 38 years in the industry as cruise director, shore excursion executive and currently a world-traveling feature writer for Porthole Cruise Magazine.