Setting sail invites one back to a more elegant mode of travel — and a more intimate Europe. 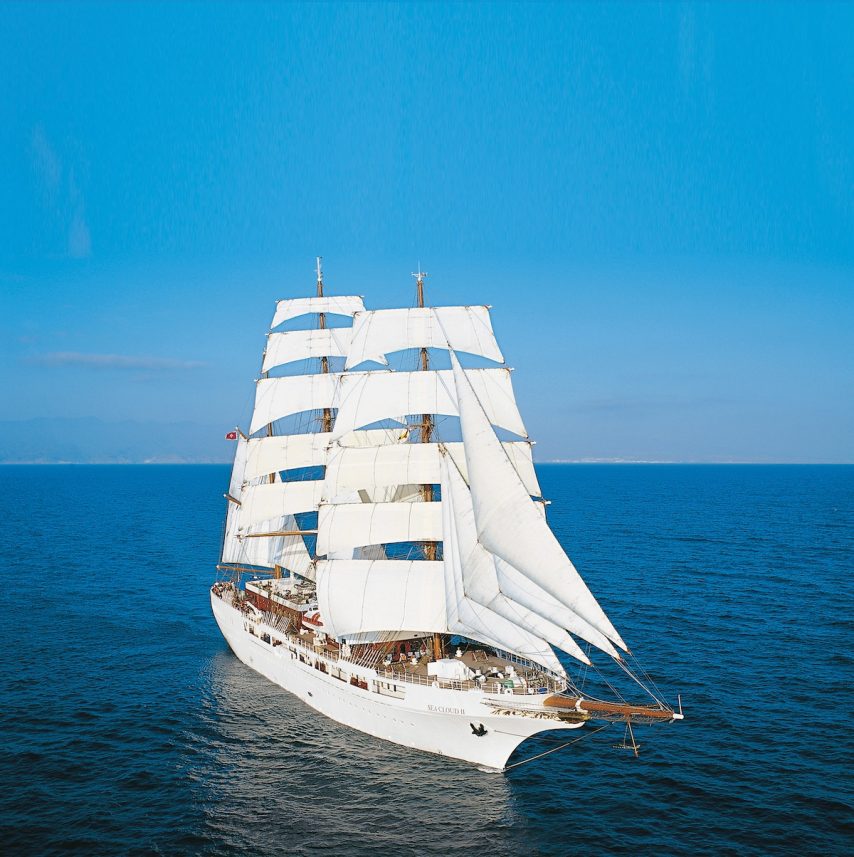 It’s nearing 10:00 p.m. and Sea Cloud II is about to depart St. Malo under a ceiling of puffy, silver clouds. Most of the ship’s 94 guests are at the ship’s rail enthralled by the view — the lights of the historic fortress are the only illumination on this balmy evening. It’s the Feast of the Assumption today and a procession through the streets of the old town is underway, haunting chants from its participants wafting across the water and up to us on the Lido Deck.

As our ship begins to glide out of its berth, something remarkable is happening all along the St. Malo dock. People are assembling, the vision that is Sea Cloud II luring them closer. It begins slowly but quickly grows to hundreds of onlookers, dazzled no doubt by the tall masts, the rigging, the gleaming woods, and the polished brass of a vessel that casts them back to an early era of sea travel.

Into the Old World

My fascination with Sea Cloud II began in much the same way. It was in 2001, while sailing aboard a megaship, that I first glimpsed the newly built Sea Cloud II skimming across a sapphire Caribbean Sea, her 23 white sails billowing in the breeze. I stood spellbound until she was out of sight, silently vowing that one day I’d experience her magic.

I boarded Sea Cloud II in Portsmouth, England, a city filled with maritime history including Nelson’s flagship HMS Victory and The Mary Rose Museum, which is built around the hull of Henry VIII’s fleet, discovered by divers and brought to the surface in 1982 — nearly 500 years after she sailed. Sea Cloud II is part of the Hamburg-based Sea Cloud Cruises, a line whose 87-year-old flagship, Sea Cloud, holds its own maritime history, having originally served as the private yacht of Marjorie Merriweather Post and E.F. Hutton. Portsmouth is a fitting embarkation point for my 9-day sailing to Brittany, Normandy, and the Basque Country.

A stroll up the gangway delivered me to the ship’s reception area, a warm and inviting space where amber lighting, elaborate crown molding, polished brass and woods, and original oil paintings are reminiscent of an elegant hotel of yesteryear. With the ship’s diminutive size (3,489 grt), I expected my junior suite, located just off reception, to be cozy at best. Instead, I opened the door to what is, without question, the most luxurious ship accommodations I have had in over 40 years of cruising.

RELATED: My Head’s in the (Sea) Clouds

The décor is a riot of detail, from the sitting area with its silk-upholstered period love seat and armchair to the fireplace, an electric one that casts a warm glow. An oil painting above the fireplace is illuminated by its own spotlight, stunning wall molding adorns the entire suite and a nook, off the entryway, offers two closets and ample storage behind beautiful burled mahogany doors. In a nod to modern times, a flat-screen TV is nestled in a lovely armoire that also hides a refrigerator and glassware while the bed, a queen, is outfitted in plush linens, a drape above providing a dramatic frame. Brass accents glint off hardware and even the ceiling’s sprinkler nozzle is gleaming brass! The gilded theme continues in the marble bathroom with tub and — I’m not kidding — a delicate golden design even adorns the toilet paper.

If you’re unfamiliar with Sea Cloud II, you’re not alone. Until recently, the five-star Sea Cloud II was marketed almost exclusively in Europe and the ship continues to attract primarily German-speaking guests but features onboard communication — from announcements to menus to lectures — in both German and English. On my sailing, I was one of only seven native English-speakers but quickly learned that the German, Swiss, and Austrians who compose most of the passenger roster speak English as well as I do.

The real common language aboard Sea Cloud II is, as you’d expect on a classic windjammer, the….