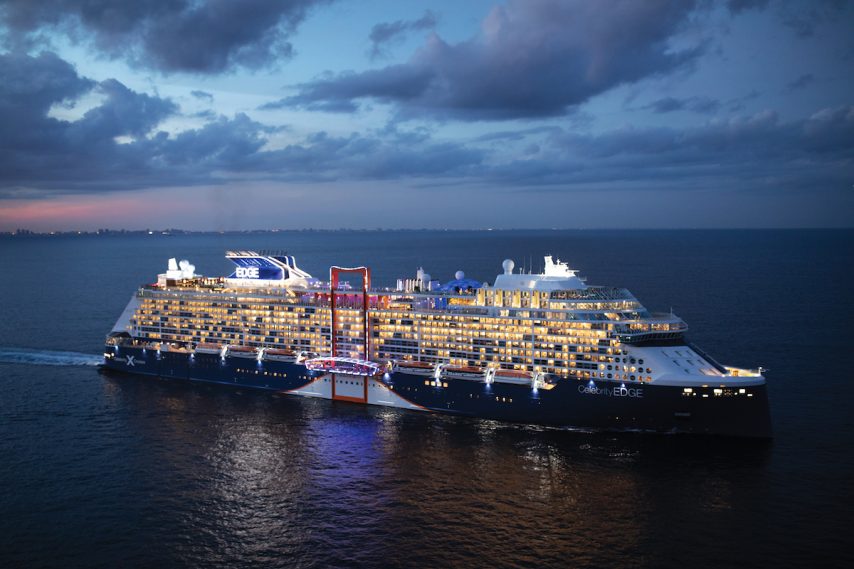 “There is no Terminal 25,” my taxi driver huffed as we neared Port Everglades. “Trust me, I’ve been driving here for 15 years. It’s not there.”

We arrived shortly at, you guessed it, T25. In the cabbie’s defense, the structure is Celebrity Cruises’ newest terminal, a spacious, bright, state-of-the-art facility designed for “frictionless boarding” (to use Celebrity-speak), whose goal is to move guests “from the car to the bar” in less than 10 minutes.

But the real star of the show that day was the impressive new ship with the cantilevered orange contraption draped over the starboard side, the 2,918-passenger Celebrity Edge. Celebrity had been touting this new entrant — the first in its new Edge class of ships — for a year before the December 2018 christening, claiming that it would be the most high-tech cruise ship at sea. That’s the sort of hyperbole that makes a travel writer roll his eyes. But after three days on this magnificent vessel, I came away convinced. Mostly.

The technology begins well before departure for those who download the ship’s smartphone app, which enables advance check-in, provides a boarding pass, and uploads a guest’s selfie for facial recognition by security (and faster boarding). Once aboard, passengers can use it to access deck plans, see their own position via geo-location technology, text fellow passengers, add activities to a calendar, and book dining and spa times. It even allows a smartphone to serve as a room key and adjust the lights and temperature in the cabins, although you can still accomplish those tasks manually, if you prefer. Royal Caribbean, Celebrity’s parent, plans to roll out the technology to its entire fleet this year.

My wife, Kathy, accompanied me on this trip. As we searched out our stateroom, we were both impressed by the understated interior decoration of the public areas. I still recall when brass accents, smoked glass, and gaudy light fixtures were commonplace on cruise ships, so I was relieved to see that the color scheme throughout drew from a sophisticated palette: mostly muted shades of gray, with occasional splashes of wine red. “Most ships make you feel like you’re in Las Vegas,” said Liam, a fellow passenger who has sailed on dozens of cruises. “This feels like you’re in an upscale resort.”

\We were delighted by what we found in our 243-square-foot Edge Stateroom with Infinite Veranda. The king-size bed was a welcome surprise, and the wealth of storage space was more than we needed. The “veranda” of the 918 Infinite Veranda cabins is actually part of the room’s interior that can be walled off with bi-fold glass doors and opened to the elements by lowering a large outer window to about waist height. Sounds clever, but as Kathy pointed out, the stateroom can’t be curtained off while someone is using the veranda, a problematic design flaw when one guest is an early riser who likes coffee on the veranda while the other guest sleeps in.

The most distinctive feature on Celebrity Edge, though, is not found in any suite or stateroom, but clinging to the side of the massive vessel. Roughly the size of a tennis court, the Magic Carpet operates somewhat like an exterior elevator, able to stop on — and become part of — four decks. On Deck 16, it transforms into a specialty restaurant. On Deck 14, it turns into an open-air lounge for up to 100 guests, with a bar and live music. On Deck 5, it adds al fresco seating to the ship’s specialty seafood restaurant. And on Deck 2, it serves as an elegant tender-loading platform.

That first night, Kathy and I ate dinner at the ship’s specialty CGI restaurant (at least, that’s how I came to think of it): Le Petit Chef and Friends, a theatrical 3D-animation-cum-meal performance during which thumb-size cartoon chefs are projected onto your plate with mind-blowing realism and “prepare” your dish. (There’s a fixed menu of salad, steak frites, truffled cheese ravioli, and green tea matcha cake, though Kathy was able to request a vegetarian entrée).

Most guests would be satisfied with just the four complimentary main restaurants: New American at Cosmopolitan, French at Normandie, Mediterranean at Cypress, and Italian at Tuscan). But to miss the specialty venues, including Le Petit Chef, would be a sin; many guests I spoke with said the upcharge (sometimes up to $65 per person) is worth the memorable meals. Savor exquisitely marbled beef at Fine Cut, barbecue at the outdoor Rooftop Garden Grill, a seafood raw bar at Raw on 5, and “experiential dining” at Eden. More on Eden in a bit.

All-day casual dining at the complimentary grab-and-go Oceanview Café is like eating at the best New York deli imaginable, with Asian stir-fry, gourmet sandwiches, salad bar, and what may be the tastiest pizza at sea. Also complimentary are several smaller cafés and an outdoor burger stand. Two semi-private restaurants — Blu (spa cuisine) and Luminae (Continental) — are open for Aqua Class and suite guests, respectively. The spa, operated by OneSpaWorld, has 23 treatment rooms and an old-fashioned full-service barbershop for men. Suite guests can get away from it all in The Retreat, an exclusive relaxation area with pool, bar, sundeck, and lounge. The Resort Deck, with its main pool, glassed-in Solarium pool, jogging track, and Pool Bar, is where we spent much of our time. The Resort Deck’s Rooftop Garden is kooky fun, with its horticultural sculptures, massive outdoor TV, and giant Jenga games.

I’ve saved the best — or do I mean the weirdest? — for last. Eden is a three-level space with expansive aft views. It’s one part craft-cocktail bar, one part experimental restaurant (think ruby-red carabinero shrimp with aloe and “oceanic broth”), and one part performance space in which futuristically dressed actors, called Edenists, swing on trapezes, juggle, gaze into the infinite void, and — strangest of all — engage you in conversation.

All of which begs the question: Who is this ship for, anyway? There are few typical diversions like bingo, trivia contests, napkin folding, etc., and a dearth of entertainment for families and kids. The lack of traditional shipboard activities left some guests I spoke with feeling like there wasn’t enough to do.

Celebrity Edge Caters to the Next Generation

Celebrity Edge, with its apps, geo-location technology, artisanal cocktails, and lack of traditional activities, strikes me as a ship aimed at millennials. Nothing wrong with that; it’s simply different from Celebrity’s typical demographic.

Our short cruise to nowhere coming to a close, I asked Kathy for her overall reaction. She thought about the great meals we’d had, the technology-forward amenities, the musical performance in the ship’s state-of-the-art theater, the bars and cocktail lounges, and our beautiful stateroom, and she uttered the ultimate Kathy compliment: “Very nice,” she said. But if you knew Kathy, you’d know that was a 5-star review.

Celebrity Edge sails in the Caribbean in the fall and winter, and in the Mediterranean in the spring and summer. For more information, go to www.celebritycruises.com.