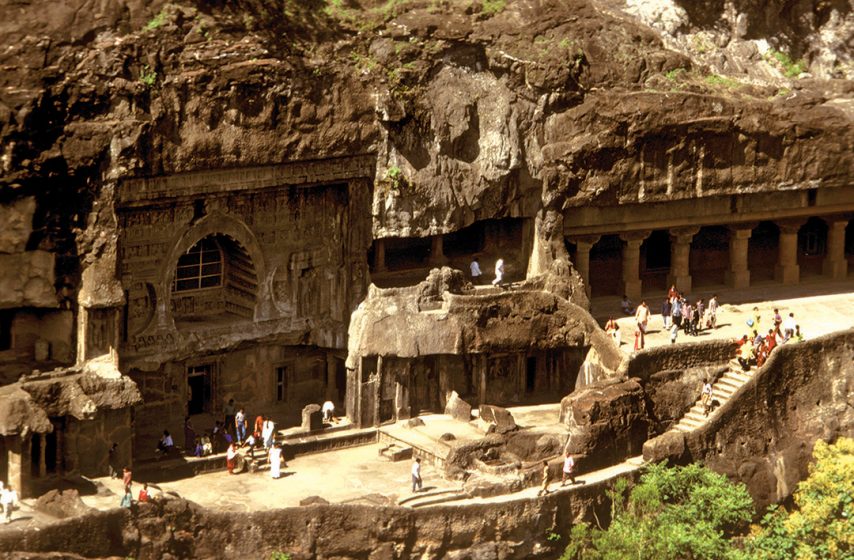 With its numerous historic attractions and thriving arts scene, cosmopolitan Mumbai provides an excellent introduction to urban India. The coastal metropolis is also a superb jumping-off point for visiting some of India’s most bedazzling natural and historic attractions, from the ancient shrine caves in Ajanta and Ellora to the palm-strewn beaches of bohemian Goa. So instead of heading straight to the airport after docking in Mumbai, stick around to experience what makes India so incredible.

The City of Mumbai

The city formerly known as Bombay has some of India’s finest colonial architecture, including the Chhatrapati Shivaji Terminus, an imposing 19th-century railway station that’s worth a visit even if you don’t have a train to catch. The landmark structure — and UNESCO World Heritage site — is celebrated for its ornate Indo-Saracenic architecture that blends Victorian Gothic Revival design concepts with traditional Indian elements.

Architecture admirers should also make a point to check out the Gateway of India, a triple archway also built in the Indo-Saracenic style that faces the Arabian Sea. From here, it’s an hour-long ferry ride to Elephanta Island, home to another UNESCO World Heritage site, the Elephanta Caves. These seven rock-hewn cave shrines are believed to date to the 6th through 8th centuries CE and feature a series of strikingly well-preserved Hindu and Buddhist relief carvings, including an 18-foot-high image of Lord Shiva in his three-headed form.

Back on the mainland, South Mumbai’s Kala Ghoda (Black Horse) neighborhood is the epicenter of the city’s arts scene. This charming district is chockfull of heritage buildings and is home to many of Mumbai’s finest art galleries and museums, including the famed Chhatrapati Shivaji Maharaj Vastu Sangrahalaya, formerly known as the Prince of Wales Museum. If you visit in February, be sure to check out the annual Kala Ghoda Arts Festival, a nine-day celebration of art, literature, and performance that attracts a global audience of artistic-minded visitors.

The Ancient Caves of Ajanta and Ellora

If you have a couple of days to spare and want an immersive understanding of India’s rich cultural and religious history, then the UNESCO World Heritage–listed Ajanta and Ellora caves deserve a spot at the top of your must-see list. These two cave complexes are best known for their ornately carved cave temples that have remained in tact for over a millennium.

The 29 Ajanta Caves were carved away by Buddhist monks over a span of seven centuries and can be divided into two groups: an earlier section of simpler sanctuary caves from the 2nd century BCE and a second selection from the 5th and 6th centuries that are characterized by ornately carved columns and statuary and glorious cave paintings depicting the life of the Buddha, many of which remain in excellent condition to this day.

By the start of the 7th century, the Ellora Caves — some 65 miles from Ajanta — began to develop and over the next 400 years, some 34 temples would be dug from the area’s towering basalt cliffs. Unlike Ajanta, Hindu and Jain shrines are represented alongside the older Buddhist temples.

Over the past decade or so, the region surrounding the city of Nashik — some 100 miles north of Mumbai — has firmly established itself as India’s major hub….