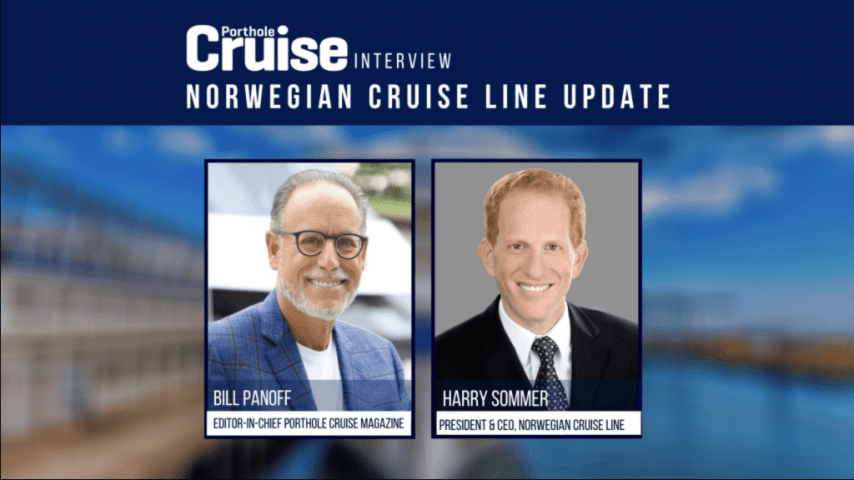 When Norwegian Cruise Line President Harry Sommer took over for departing president Andy Stuart in December of 2019, everything was looking up for the cruise line and the industry as a whole. However, just a few months later, a global pandemic came out of the blue and the cruise industry has been on hiatus ever since.

President Sommer and his team at Norwegian Cruise Line didn’t sit idle while cruising was on hold, they worked hard to develop a strategy for a safe return to operation. That included a high-profile collaboration with one of their biggest competitors, advice from infectious disease experts and professional health organizations and a host of onboard changes aimed at making cruise ships an environment where COVID-19 can’t thrive.

President Sommer joined Porthole Cruise Magazine founder and Editor-in-Chief Bill Panoff for an in-depth discussion of the state of the industry and what he and his team have been working on to bring cruising closer to a return. You can watch the full interview with Harry Sommer below.

A collaboration with Royal Caribbean Group called the Healthy Sail Panel made waves in the industry and Sommer explained how the partnership came to be with help from former Food and Drug Administration Commissioner Dr. Scott Gottlieb.

We compete in the marketplace, but we don’t compete in health and safety

“We started at little work internally and it quickly became apparent to us that as much wonderful work we could do internally, this was sort of a new and novel type of pandemic outbreak out there and it was important for us to engage with outside experts,” said Sommer.

“We reached out to Dr. Gottlieb, we had seen him do a lot of good work as a regular guest commentator and seemed to be very articulate and knowledgable and non-political,” Sommer continued. “Interestingly enough, Royal Caribbean also had approached him…Frank Del Rio, our CEO, and Richard Fain, their CEO, they talk regularly both participating on the executive board of CLIA and we both reached out to Scott Gottlieb and said hey listen, let’s see if we can join forces. We compete in the marketplace, but we don’t compete in health and safety.”

When asked about the effectiveness of the Healthy Sail Panel and events like Carnival’s Global Scientific Summit, Sommer was adamant that cruising will be safe once it returns.

NCL has long been known for being one of the best cruise lines for solo travelers, routinely adding social areas specifically for solo passengers on board. Sommer was asked if new social distancing standards would change the way solo cruisers experience their vacation. He explained that there was still a lot of work to be done fine-tuning the details and that the cruise line would share more about what to expect onboard as we draw closer to the return date.

Prior to the industry pause, Norwegian Cruise Line had begun teasing their new class of ships, known only at the moment as Project Leonardo. Sommer was asked if he could share any more details about the first one to debut in 2022.

“The ship is being built in Italy and despite some of the challenges there earlier this year, it looks like it will broadly be on time. Maybe a little bit late but nothing too serious,” he said.

He explained the ship was progressing nicely and his team recently received mock-ups of public spaces and cabins.

“I’ll tell you Bill, the ship looks beautiful. So we’re [taking] a little different direction here. A lot of other cruise lines are going bigger, we’re going a little bit smaller. Which in hindsight, in this world, proved to be a good idea so we’re happy for that one,” he said. “We aren’t really broadly sharing details yet but one thing I can tell you is we use a completely different decor… this ship is just off-the-charts fantastic”

“We put our guests first. We believe in providing extraordinary experiences for our guests. We have an incomparable fleet, we invest a ton of money to keep the ships fresh. Frank [Del Rio] has gone on record saying he wants every guest that comes in every one of our ships to think that they’re on an inaugural cruise, that’s how nice the ship is maintained,” he said.

Sommer also mentioned world-class entertainment, a tremendous number of dining options, 300 destinations on all seven continents and in Sommer’s words, “the world’s best crew” as reasons why an NCL cruise should be someone’s next vacation. Check out the full interview with Norwegian Cruise Line President Harry Sommer below!