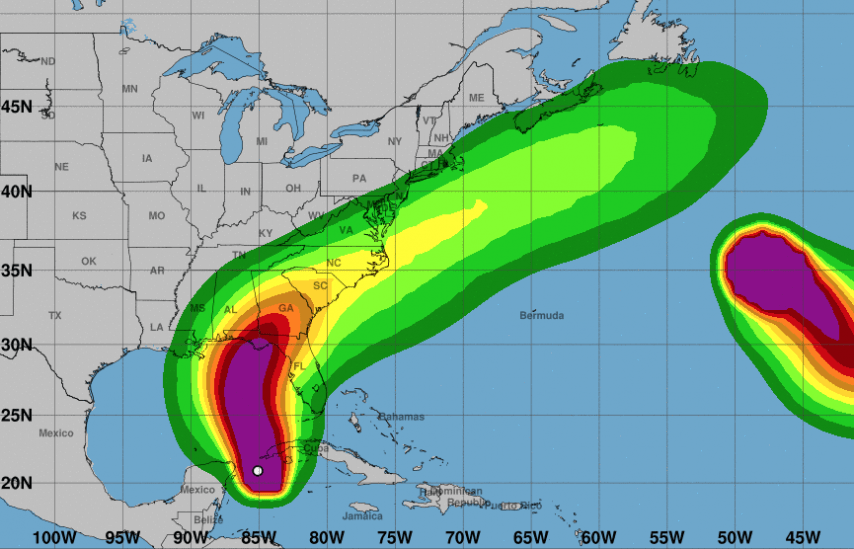 Another week, another hurricane bearing down on Florida and the Gulf of Mexico. This storm, named Michael by the National Hurricane Center, is moving its way north through the Caribbean Sea and into the Gulf of Mexico where projected landfall includes Western Florida, Mississippi and Alabama. The 7th hurricane this season, Hurricane Michael is currently a category 1 storm with the potential to increase in size and wind speed prior to making landfall.

Major cruise lines have been on top of Hurricane Michael since the tropical depression first formed in the Caribbean just north of Honduras.

Carnival Glory had to forgo a scheduled stop at Grand Cayman and Carnival Freedom, which left Galveston, TX on Sunday, updated their itinerary to avoid the wind, rain and rough seas. Norwegian Cruise Line and Royal Caribbean also had to make some changes to the schedule, but according to Royal Caribbean’s Chief Meteorologist James Van Fleet, passengers don’t have much to worry about.

Tropical Storm #Michael will continue to bring rain to the Western Caribbean as it tracks in to the Gulf of Mexico. Very few @RoyalCaribbean itineraries should be impacted. pic.twitter.com/w1bWaNF13K

While the potential for a storm runs through the end of November, it’s looking like hurricane season 2018 is coming to close without too much activity impacting cruise lines and their ships. However, those in the path of Hurricane Michael should take every precaution to ensure their safety, especially as the storm increases in size and strength. A category 3 hurricane can bring sustained winds between 11-130MPH as well as a storm surge of up to 12 feet. If you’re near the Gulf Coast, be sure to stay on top of all the latest weather tracking from local and national news sources in case evacuation becomes necessary.