Home Ship Home: Come aboard with a couple of regular world cruisers 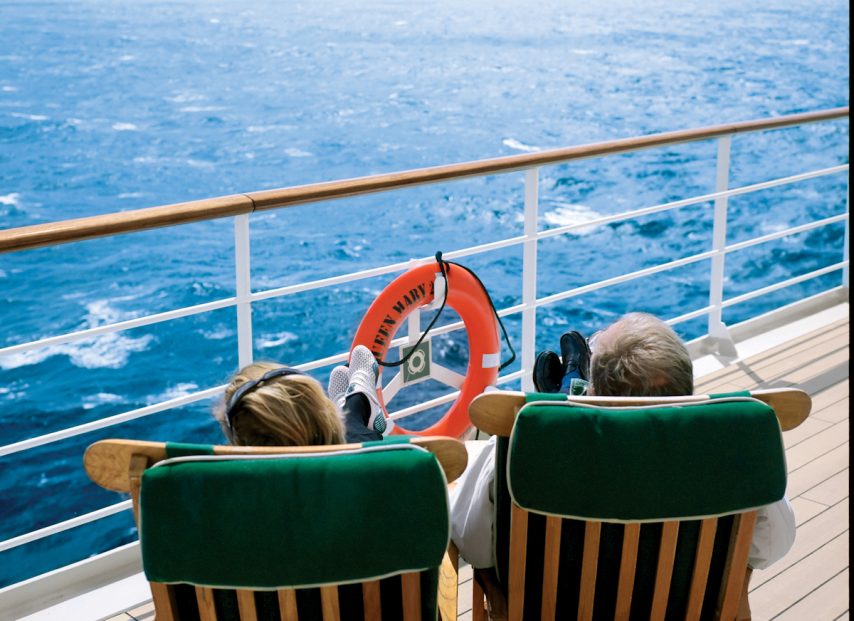 For Linda Weissman, 70, and her retired orthopedic surgeon husband, Martin, 76, home away from home is on the ocean liners of Cunard Line. The Michigan couple resides on a Cunard ship for a third of each year, sailing world cruises, sometimes with added days. Since 2007, they’ve spent some $1.5 million in the process, with more cruises planned.

“It’s how we get away for winter,” Linda says.

The couple chooses a cruise based on their preferred east-to-west routing (which they say is easier in terms of time adjustment). Linda has a special affinity for Queen Mary 2, though they’ve also spent time on Queen Victoria and Queen Elizabeth.

“People say ‘What do you do on a ship for four months?’ I say ‘I live here, it’s my condo,’” she says. “Everybody knows me. It’s kind of like the bar on Cheers. Everybody knows my name.”

The Weissmans’ Queens Grill Suite comes with access to dining in the private Queens Grill Restaurant, which is reserved for suite guests. The category they book comes with a bedroom and living room area, large bathroom, balcony, and butler service. Linda adds homey touches as well. In fact, she says that she and Cunard keep photos of how she likes the suite to look.

“I have to rearrange and bring in five million extra drawers for all our stuff, because I bring too much stuff — always,” she admits. “They move the couch and turn the chairs around. We take showers and don’t use the big whirlpool bathtub, so we have them hang a pole across, wall-to-wall, to make that Marty’s closet.” She also asks that a lamp be added on the dressing table.

Her requests of the butler on a daily basis include laundry pickup — with a separate pile for what can go into the dryer. She also has the refrigerator stocked with a dish of green olives, her preferred snack.

Personalized service combined with the fact that you don’t have to worry about maintenance are reasons to winter on a cruise ship instead of a condo, Linda says. “It’s like a combination of a six-star hotel and a glorified nursing home. They take care of you. You are waited on. You don’t have to do a thing.”

Of course, packing for a four-month cruise can be challenging, especially when some three-dozen formal nights are involved. Linda says she mixes and matches, prefers jeans and sweats for daywear, and brings eight suitcases total. Martin brings two suitcases plus his golf clubs since he golfs in most ports.

As a reminder of home, Linda loads photos of their children and grandchildren onto their iPad and smartphone, and she keeps in frequent touch via the ship’s Internet and FaceTime. There are phone calls too, but she tells her kids to be mindful of calls being expensive when the ship is at sea. Linda laughs recalling a comment from her youngest daughter: “She said, ‘With all the money you’re spending on these trips, why don’t you add on $5,000 and I can call you whenever I want.’”

Linda says her days on the ship are typically filled with gym workouts, lectures, movies, and spa treatments. At night, she and Martin particularly enjoy performances by comedians and cabaret singers. Binge-watching TV shows is another pastime and she downloads entire series onto her iPad. She went through all the seasons of Breaking Bad on one cruise. “I’ve watched a million shows and I am trying to figure out now what to watch next year,” she says.

Sometimes the couple skips a formal night for the ship’s buffet. “We go in flip-flops and get the made-to-order pizzas. We stop at the self-serve ice cream machine and get a platter of cookies, and we’re very happy. We love doing that, and we invite people…