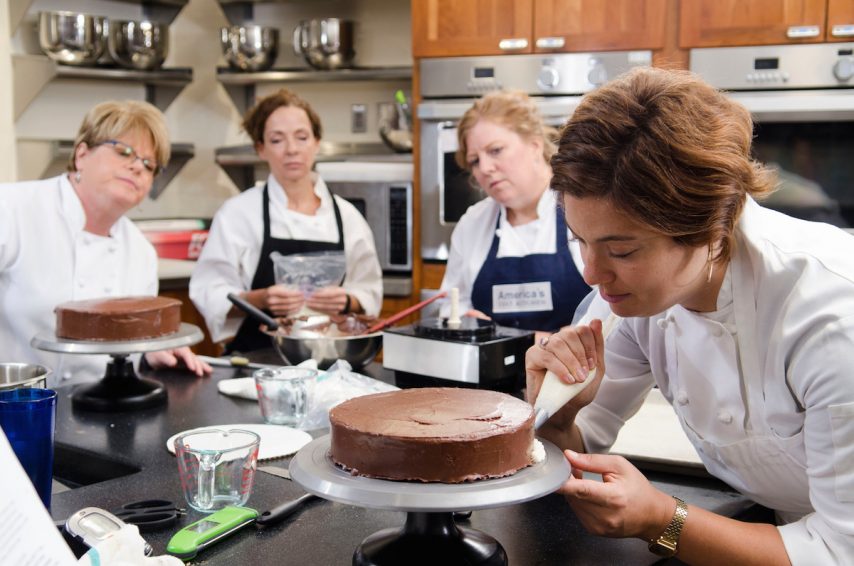 “America’s Test Kitchen will bring a new take on cooking classes at sea that spans not only recipes, but also the science of the cooking process,” said Orlando Ashford, president of Holland America Line. “Its mission is to determine the best methods, ingredients, and cooking tools — and now these discoveries will be shared with our guests.

“I’ve been trying to find the right word. I need an expressive word at this moment. So words like awesome, excellent, exciting, cool, best — I think I’ve settled on this word. This is a momentous moment. HAL has the best food at sea, so we wanted to partner with the best, most popular how-to-cook show on TV.”

The planned 45-minute demo courses will feature a mix of video content, live instruction, taste tests, and recipe samples. Some of the courses in development include Asian Dumplings, Salad for Two, We Love Chocolate, Everything Salmon, Getting to Know Chiles, Flavors of the Mediterranean, Meatless Monday Meals, and New Italian Favorites. Also planned are 90-minute workshops that focus on teaching a specific skill set. Proposed workshops include Perfect Pies and Handmade Pasta.

America’s Test Kitchen is a fully equipped, 2,500-square-foot test kitchen located in Brookline, Massachusetts. A team of more than 50 highly qualified test cooks perform thousands of tests every year with the goal to develop the best recipes and cooking techniques, to review and rate the best cookware and equipment, and to taste-test and recommend brand-name supermarket ingredients for the home cook. Recipes are tested up to 70 times to arrive at the combination of ingredients, technique, temperature, cooking time, and equipment that yields the best recipe.

America’s Test Kitchen demo courses and workshops will begin aboard ms Westerdam October 18 for the ship’s Mexico season and on ms Nieuw Amsterdam November 13 for the Caribbean season. The program is expected to roll out fleetwide by June 2017.