A Taste of Alaska’s Craft Distilleries 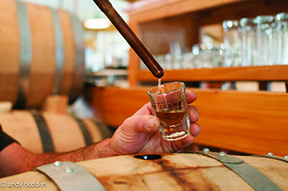 Glaciers, wildlife, and adventure experiences of a lifetime aside, there’s a new way to get a taste of Alaska. Alaska’s craft distilleries are all the rage, especially in Skagway, Haines, and Juneau, three port cities of the state’s popular Inside Passage itinerary in the Southeast.

Nine distilleries across the state are members of the Alaska Distillers Guild, including several operations in the Anchorage and Fairbanks areas. Heather Shade, a founder of the guild and co-owner of Port Chilkoot Distillery in Haines, says each region is developing its own style.

“Alaska has always been the land of opportunity for new things,” Shade says. “And this is seen as something new, something you can innovate with.”

The distilleries sell bottles in various sizes, for easy packing as souvenirs and often with labels reflecting the region where they are produced. Tasting rooms at the distilleries provide the opportunity to sample products straight out of the bottle or in cocktails. (Pours are restricted by law to 1 oz., three drinks maximum.)

“Rather than just the smoky bar shots and beer culture that seemed to dominate Alaska for a long time, the distilleries are educational and have also raised the bar for how we drink here,” Shade says. In fact, Alaskan-grown ingredients are used in the distilling process, for a taste of Alaska in every sip.

“People may not know this, but we have a pretty large agricultural industry and the things that grow really well here are grains like barley and rye,” Shade explains. “We have the raw materials here. We have the clean water, we have the grains and the starch. And there’s a lot of interest in unique Alaska goods people can bring home.”

Raised in the California desert and a biologist with the National Parks Service, Shade had no experience in distilling — or even home brewing— when she decided that Haines was where she wanted to live and open a business. So she did some studying of distilleries in the Lower 48 and, along her carpenter husband, Sean Copeland, opened Port Chilkoot Distillery about five years ago. The distillery is in a 1902 building that once housed the bakery for historic Fort Seward.

“I thought this would be something unique for Southeast Alaska, something fun, something good for the community that would create jobs and products that would represent the town,” Shade says. “I had to go out and learn how to distill and we developed our recipes over the course of a year while we were renovating our historical building.”

Port Chilkoot garnered acclaim on the international distillery scene when its London Dry–style 50 Fathoms Gin, made with locally harvested spruce tips, was a double gold medal winner at the prestigious San Francisco World Spirits Competition, while their Green Siren Absinthe, made with local herbs such as wormwood and anise hyssop, was named the best in its category at last year’s American Craft Spirit Awards. The distillery also produces Icy Strait Vodka, Boatwright Bourbon, and Wrack Line Rye.

The labels on the products were designed by Haines artist Laura Rogers to honor the local fishing community. On 50 Fathoms Gin, for instance, there is a halibut — 50 fathoms (1 fathom = 6 feet) is the optimal depth to catch the fish.

On the porch at the Haines distillery, you can sip the gin paired with a homemade tonic while you admire your ship in the harbor.

“Where we start is Skagway water,” says Gary Heger, a long-time resident of the historic gold rush town. With his wife, Janilyn, and son, Lucas, Heger opened Skagway Spirits Distillery last year, producing vodka and gin. “It’s all about the water. This is the first town the glacial….