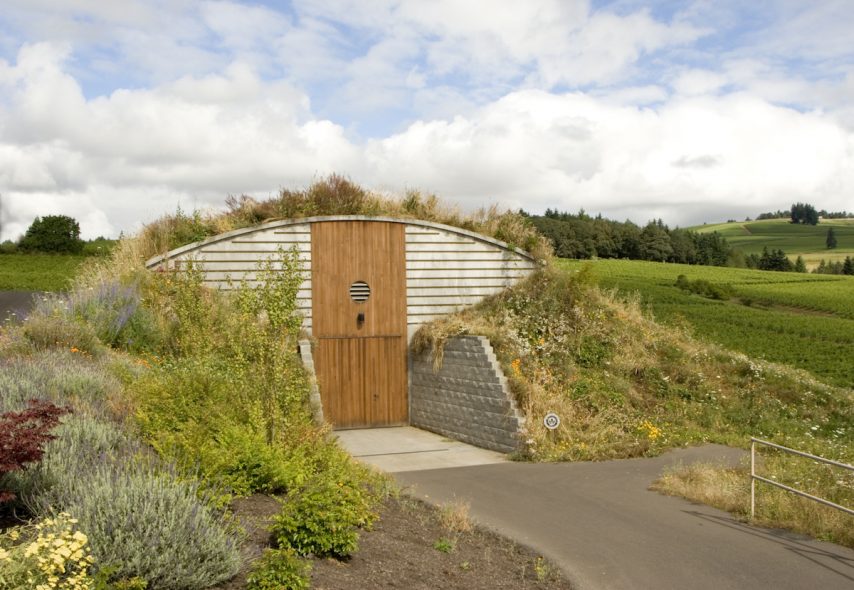 The thick, weathered vines at  Sokol Blosser attest to the decades that have passed since the rootstocks were first planted. It’s almost as if the vines are supporting the trellises and not the other way around. These days, it’s hard to believe that the vines were once small, timid, and so reliant on that support. If only they could talk, what a tale they would tell of the history of the Willamette, OR vineyard and family who planted them.

Directions: Take I-5 north to Exit 271 at Woodburn. Turn left onto Hwy 219 and follow it through St. Paul, across the Willamette River to Newberg. Turn left on Hwy 99W, and follow 99W through Newberg to Dundee. From Dundee, follow 99W another 2 miles to a blue sign reading Sokol Blosser Winery. Take a right at the sign, and follow the lane a short distance to the winery.

Kids: Yes (accompanied by a parent)

In 1970, while their neighbors were working their wheat fields, orchards, and turkey farms, Bill and Susan Sokol Blosser, two liberal arts students from Stanford University, started planting grapevines on their land in Oregon. Their mission was to produce high-quality pinot noir wine. Slowly, they transformed small orchards into vineyards and added adjacent sites through the years to establish one of the first wine-making enterprises in the Dundee Hills area. They built their winery afterward, in 1977.

“We stand on the shoulders of giants.” The ancient saying attributed to Bernard of Chartres rings so true for the Oregon wine industry, which owes a debt of gratitude to families such as the Sokol Blossers, Ponzis, Campbells, Eraths, Adelsheims, and, of course, the Letts. As pioneers in this area, they all persevered through numerous challenges, setting the stage for the hundreds of Oregon wineries which followed. For Susan Sokol Blosser, this also included contributions to the development of wine-industry events that are now world-renowned, like the International Pinot noir Celebration (IPNC), the annual ¡Salud! Auction, and the Oregon Pinot Camp. She also helped form the Oregon Winegrowers Association and lobbied for our current Land Use Legislation.

It is apparent that the entrepreneurial and orchestrating genes were passed down to the second generation of Sokol Blossers, Alex and Alison. “Our parents were stewards of the land; we are stewards of the business,” says Alex Sokol Blosser. Like many other second-generation winery owners, the Sokol Blosser children have been able to carry on the traditions of their parents while adding their own dimension, transitioning the winery into the new age of technology and adapting to the ever-changing market place with renewed passion and energy. Like their parents before them, the Sokol Blosser children have participated in organizations celebrating Oregon wine, while remaining active in the causes and events initiated by their parents. Alex is currently the president of the Willamette Winery Association and Alison is on the board overseeing Oregon’s sesquicentennial celebration.

The focus of the 181-member Willamette Winery Association is to promote trade and tourism for the wineries in the Valley and unity among the winegrowers. “There are things we can accomplish together that we can’t do by ourselves,” explains Alex. Together, they address and advocate for issues that affect the whole Willamette Valley–area wine industry. Their goal is to put Oregon at the forefront of the national wine industry. With increasing national and international competition, it’s essential that the Willamette Winery Association create a huge impact from a small community.

When Sokol Blosser winery began, they had nothing but a dream and hope to build on. With the passage of time, their winery has become well-established. Their efforts have yielded a supportive community and a second generation of winemakers that continues to nurture it. Time worn and deep-rooted, their vines have seen the birth and evolution of Oregon’s whole wine industry.