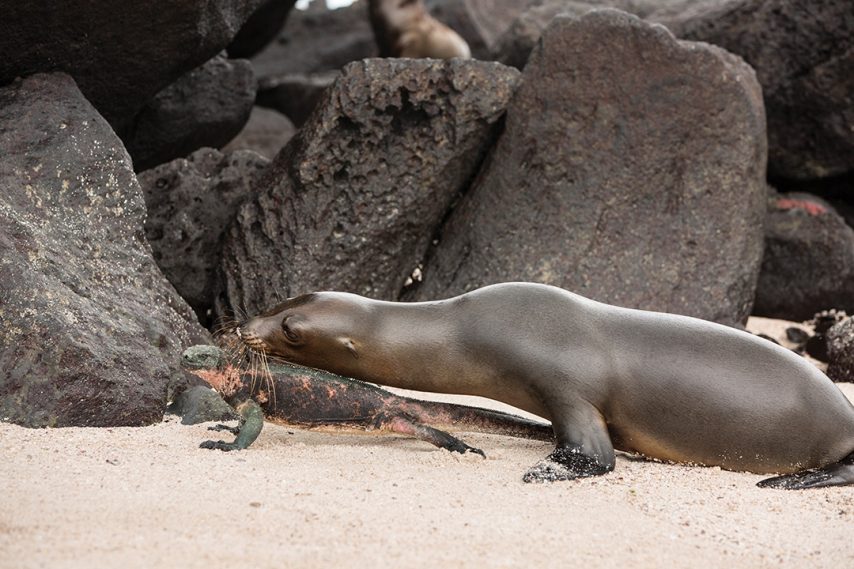 Exploring one of the world’s most elusive archipelagos

Story and photography by Michel and Lisa Verdure

We were walking in the highlands of San Cristobal Island for less than 15 minutes when we heard the definitive call of the elusive mockingbird. This beautiful gray creature, which is found only on this island, is a species that evolved to be completely different from all other mockingbirds in the world. As our guide described in detail the evolution of the flora, fauna, and animals of the region, we realized we were in for a very special experience.

Our UnCruise Adventure kicks off in Quito, Ecuador. From Casa Gangotena, a boutique hotel located in the old town overlooking Plaza San Francisco, we start with a full day of visiting the city’s historical landmarks. In small groups, we chose between walking tours or bus tours led by guides who are Quito natives, speak excellent English, and are extremely knowledgeable about the history of the city.

Landmarks of interest that we visited included the Basilica del Voto Nacional, the tallest church in Ecuador; The Plaza de Independencia, where the heroes of the revolution against Spain are honored; The Jesuit church, filled with gold leaf and beautiful paintings; The Presidential Palace, a historic residence that’s built around a central courtyard; and Iglesia San Francisco, the beautiful church located on the plaza across from our hotel.

The backdrop behind the hotel is the famous winged Madonna, El Panecillo, who looks over Quito from atop a 650-feet-high hill, and was constructed in 1976 of 7,000 pieces of aluminum. Having the opportunity to experience Quito added dimension and perspective to our trip.

Getting to Know the Galapagos

The oceanic Archipelago of Christopher Columbus, commonly known as the Galapagos Islands, is entirely volcanic and was never a part of the mainland. All of the species of flora, fauna, and wildlife had to evolve to survive this challenging terrain.

The islands are a province of Ecuador, and lie about 620 miles off its coast to the west. There are 19 islands in total, and much of the access is determined by the government to ensure conservation of the islands.

The Galapagos encompasses the Galapagos National Park and the Galapagos Marine Reserve, and tourism is designed to allow nature to flourish in its natural state, free from human manipulation. The result is an experience unlike any other you may find on this planet.

We were driven to the highlands of San Cristóbal, the Galapagos’ oldest island, to Cerro Colorado and its famous giant tortoises. It was during this walk that we heard that song of the mockingbird and realized we were in the company of naturalists who were highly educated, love what they do, and made their excitement contagious.

We learned that the mockingbird is endemic to this island, and how it evolved to survive according to plant and food availability. There are three other species of mockingbirds in the Galapagos; each evolved differently on separate islands, but all are from one original colonization.

Cerro Colorado is a semi-captive breeding center for the giant tortoises. At one point there were 10 species of tortoises in the Galapagos. After the arrival of people in 1535, the tortoises became a significant food source, and it is estimated that more than 220,000 were killed over time, with only five species left. There are now about 22,000 tortoises on all of the islands, and the breeding center is working hard to restore that number.

The next day, we continued to explore Isla San Cristóbal by choosing a power walk at Punta Pitt, an ecological area with beaches and trails for exploring. We were introduced to frigatebirds, bachelor sea lions, and three types of boobies. The most striking thing we noticed was that the wildlife does not….