Giving Back with Windstar Cruises 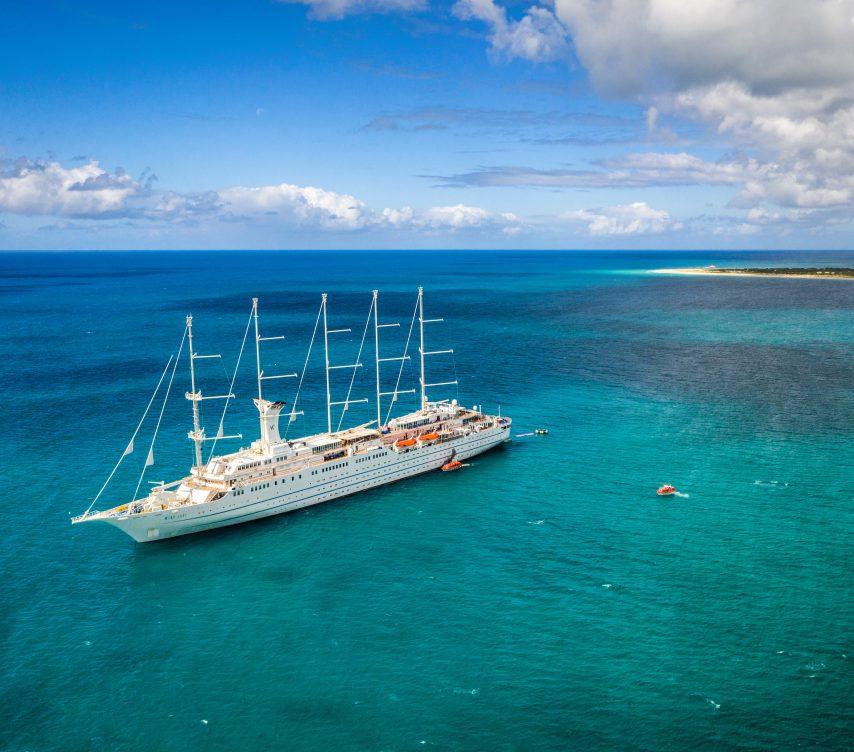 It’s easy to spot Windstar Cruises’ Wind Surf as she sits in port waiting for a new crop of excited cruisers to step aboard. She is the world’s largest sailing ship, after all. Even flanked by larger ships on either side, the Wind Surf’s distinct masts and sleek hull stand out against the bright blue skies of a fabulous Caribbean day. Here in Port St. Maarten, we’re about to embark on a journey to see the authentic Caribbean aboard this stunning vessel.

It’s not your average cruise vacation, however. We’re joined on board by not just the President of Windstar Cruises John Delaney, but also Porthole Cruise Magazine CEO and Editor-in-Chief Bill Panoff and a team of social media influencers prepared to document every last detail for their millions of combined followers. The Windstar & Porthole Caribbean Celebrations Cruise, as it was dubbed, was created specifically to bring more attention to the vibrancy of the Caribbean after the devastating hurricanes of 2017.

Armed with drones, HD cameras and our featured hashtag – #SeasTheDay – our team boarded the Wind Surf with delicious anticipation. 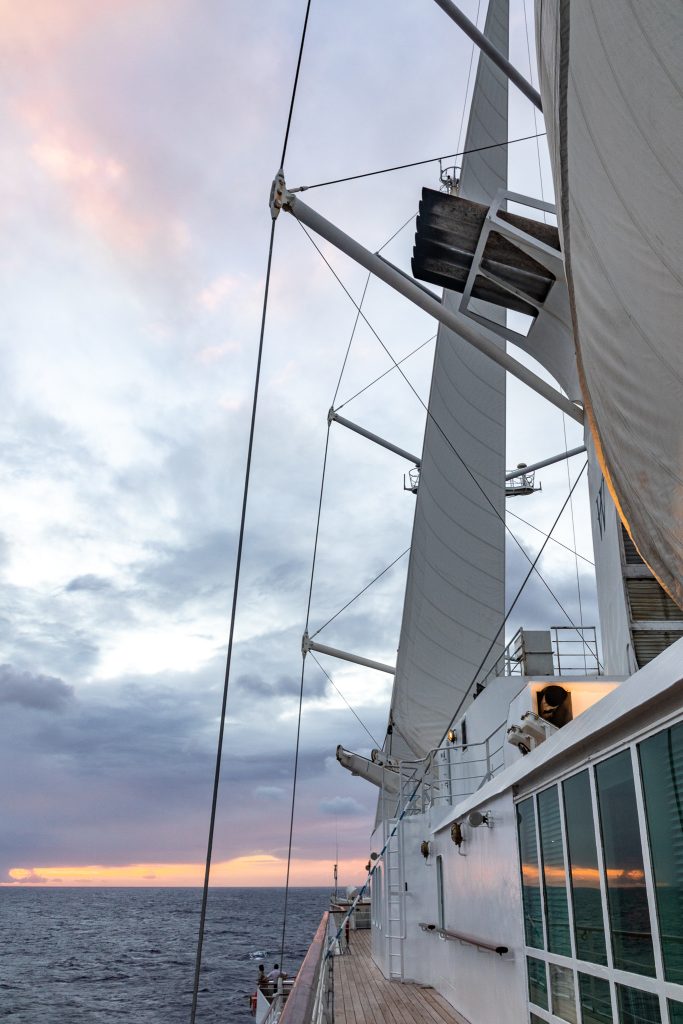 The sails unfurling on the Wind Surf | Photo: Sarah Gallo

The first day on board any cruise ship is one of exploration and discovery. Ships like the Wind Surf may not take as long to traverse as some of today’s behemoths, but their charms and character make for plenty of pleasant surprises. The first and most obvious difference between the Surf and her counterparts is the addition of five, 200+ foot masts which tower above the deck. When they unfurl from the mast during the Signature Sail Away, everyone on board stops what they’re doing to stand in awe as Vangelis 1492 plays in the background.

With her inviting and comfortable common areas, abundance of wall art, and attentive staff, it’s almost like you’re taking your own living room on a cruise through the Caribbean. A 350 passenger max capacity means the ship is intimate and inviting. There are no lines to wait in and there’s never a fight for deck chairs. It’s quite simply relaxation at its finest. A 1.5 to 1 guest to crew ratio allows for excellent hospitality and personalized service.

As the official cruise line of the James Beard Foundation, guests look forward to each meal curated by the skilled culinary team led by Head Chef Bert Muhle. A commitment to incorporating fresh, local ingredients makes for a unique menu each day of the journey.

Our tender slid past catamarans and fishing boats, trawlers and motor yachts, all bobbing gently in the waves of Falmouth Harbor on Antigua’s southern coast. Known as Waladli by those native to the island, Antigua’s soft, white sand beaches, towering peaks, and cerulean waters made it the perfect first port of call. While others spent the morning swimming with stingrays or exploring the colorful capital city of St. John, I had promises to fulfill.

Waiting for me at the tender pier when we arrived was Jennifer, the owner of Natura Creations. In her arms lay a basket of pillow gifts for the passengers on board the Wind Surf including samples of her all natural after-sun lotion, mosquito spray, fresh honey, and jams. All week long, guests aboard the Wind Surf enjoyed pillow gifts from a number of local businesses including guavaberry rum, coconut pastries and more. Jennifer embodies the Caribbean ideal of resiliency and perseverance. Despite the hurricanes, her goal remained providing the world with a taste of Antigua they won’t find anywhere else.

The next morning I awoke just as the first light poked through the half-drawn shade of the stateroom. I peered out expectantly as I knew the destination for the day, Barbuda, must be in sight.

While the peaks of Antigua were visible for miles around, Barbuda could not be more flat. From the top deck of the Wind Surf, you could see clear to the other side of the island and that unfortunate topographic trait is why we sailed to her shores in the first place. 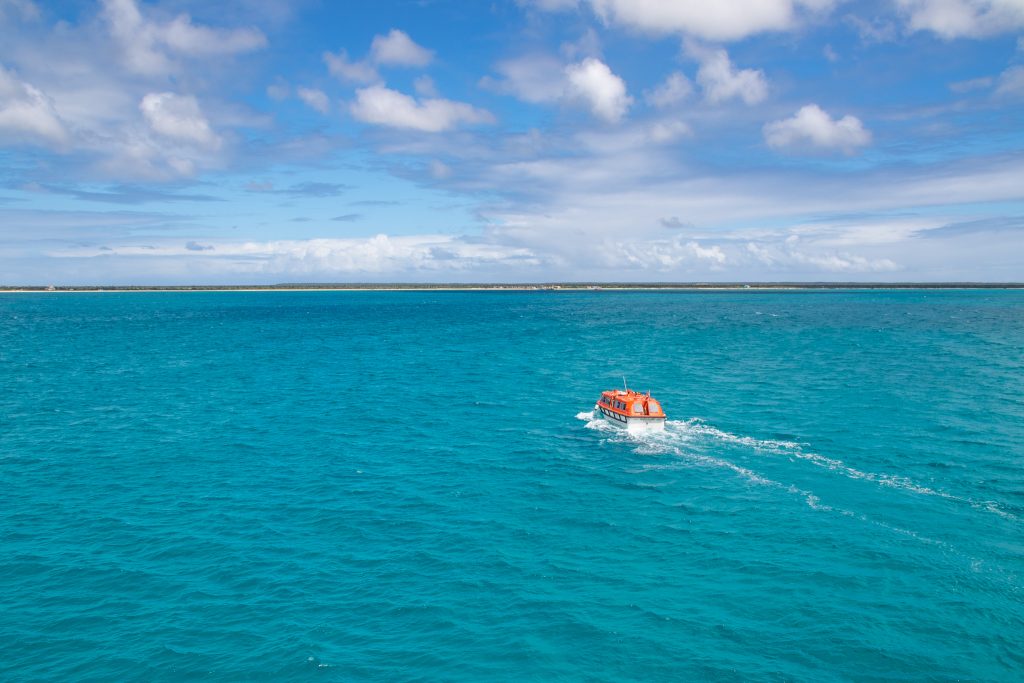 In September of 2017, Hurricane Irma changed the landscape of Barbuda forever. Without the natural mountainous barriers found on other islands in the area, Barbuda was left at the mercy of Mother Nature. The damage from 185 mph winds and crushing surf was catastrophic. Electricity, potable water, and even the roof overhead were gone in the blink of an eye for most residents. An island of nearly 1,800 people saw 95 percent of their buildings and infrastructure wiped clean from the face of the earth.

After the storm, only foundations and memories remained.

Our stop in Barbuda was not just to enjoy the pristine pink sand beaches or bathe in the brilliant crystalline waters, but to give back to an island from which everything was taken. Armed with more than $5,000 raised through an art auction in collaboration with Porthole Cruise Magazine and artist Marc Lipp, President Delaney hand-delivered the funds to The New Holy Trinity Primary School in Barbuda. Money for books, supplies, desks, windows — the school needed it all. 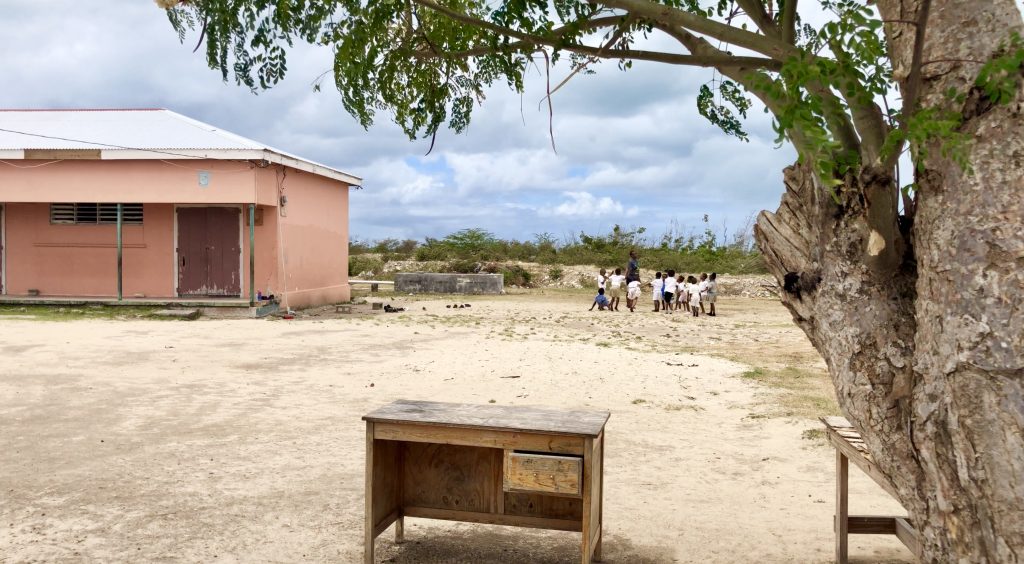 Children play in the schoolyard on Barbuda

Windstar’s investment in Barbuda and islands in the Caribbean that sustained damage from the hurricane was appreciated by all those who still call the island home. For those who remember the island before the storm, they understand that these are the first steps towards rebuilding.

The next leg of the journey took us to a region of the Caribbean steeped in culture and history. The British Virgin Islands are a collection of 50-plus islands each ripe for exploration. The main islands of Tortola, Jost Van Dyke, Anegada and Virgin Gorda are some of the most picturesque and historical in all the Caribbean. 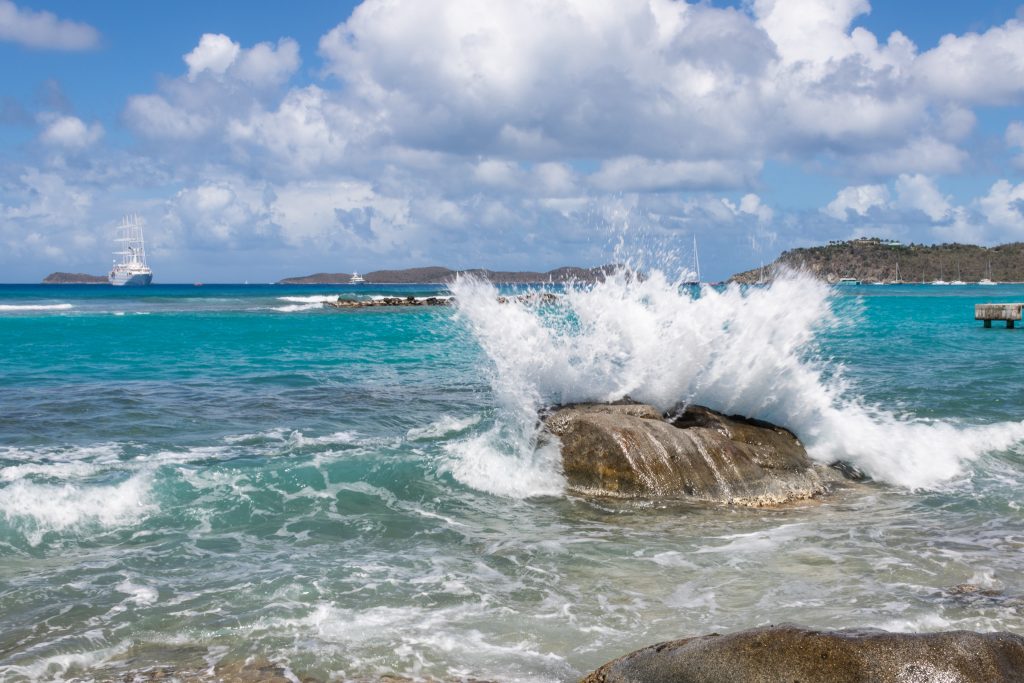 A view of the Wind Surf from Virgin Gorda

From bubbling tidal pools to stunning rock formations and imposing peaks, Windstar’s shore excursions took us all over these incredible islands and offered perspective far beyond anything we’d find ourselves. Our influencer team ziplined on Tortola and sailed a catamaran around Jost Van Dyke. They snorkeled with sea turtles on Norman Island and explored the world famous Baths of Virgin Gorda. A smaller cruise line means smaller excursion groups which adds a whole new element of personal exploration and discovery. Windstar’s attention to detail when planning their guest’s excursions is obvious and appreciated by all who attend.

The final day of the cruise took us to a Caribbean island that feels more like a swank European city with cobblestone streets and orange rooftops rather than the lush, tropical foliage which dominated all the others. The French island of St. Barthélemy is perhaps the most exclusive in the Caribbean. The world’s rich and famous flock to the island for extended vacations, leaving little room in the port city of Gustavia for any more mega-yachts bobbing gracefully in the harbor.

The island is rich with more than just euros, but history as well, having changed hands several times between the French, British and Sweden over the past 200+ years. The name, even, drips with historical relevance. Christopher Columbus and his crew were the first Europeans to encounter the island, whom Columbus named for his brother, Bartolomeo. Before we sailed away on the last night of the trip, Windstar surprised guests with a fireworks show seen by all in the harbor. Each colorful burst illuminated the sky and had all the other yachts in the harbor blowing their horns in appreciation. 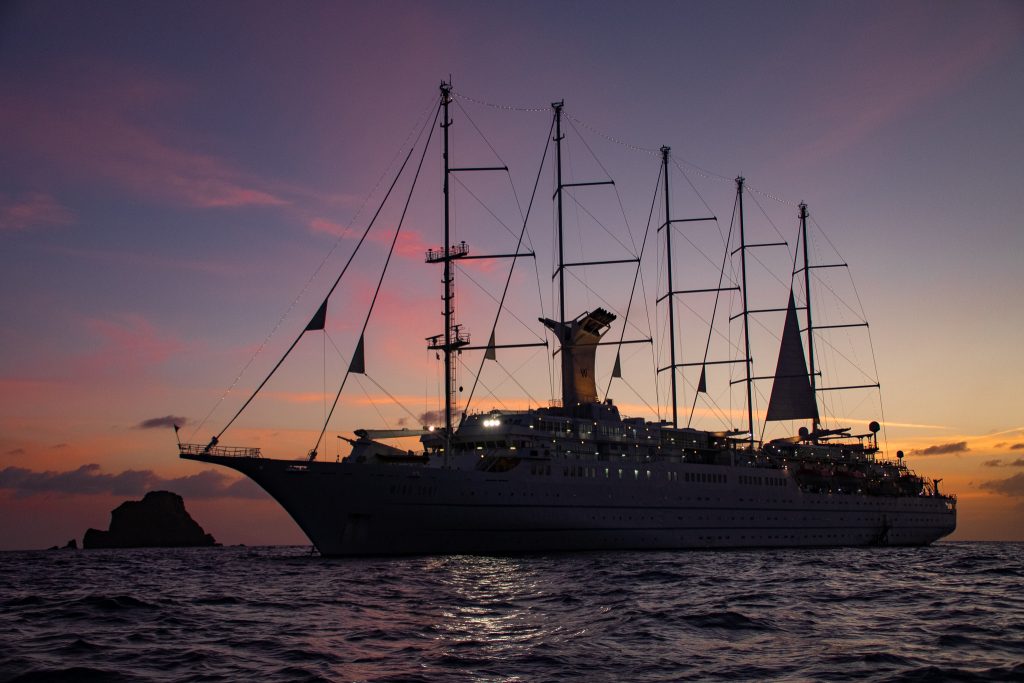 Arriving back in St. Maarten, our origin port, was met with disdain, but all good things must come to an end. I’ll miss the talented and impressive crew on board the Wind Surf who without a doubt made the experience better in just about every way. I’ll miss each island and the people I met both ashore and on board. From tour guides adding their own flair to the script to the shop owners and restaurant staff who served us with a smile, the whole region is full of people who love life and sharing their little slice of paradise. After all the islands had been explored and thousands of photos had been taken, our efforts gave us a chance to show readers the real hidden Caribbean that few get to see.