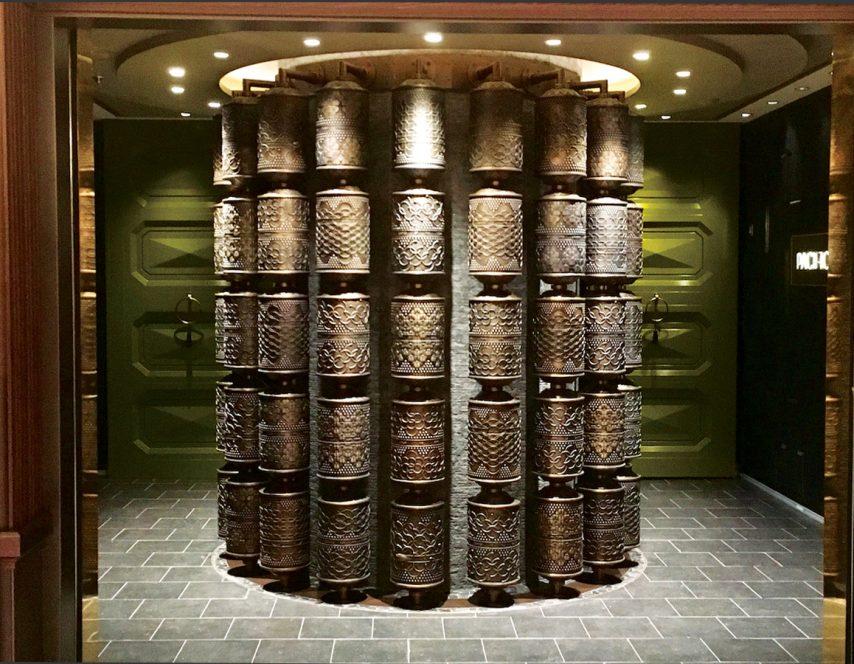 Sure, you can sail to the best destinations in the world for art lovers, from Livorno (to spend the day in Florence) to Le Havre (to explore Paris’ unforgettable museums). However, there are cruise ships that are art destinations unto themselves, with collections that might surprise even the most astute connoisseurs. Read on for where you’ll find some of the most significant works of art at sea.

Europa 2
The first time I boarded Hapag-Lloyd Cruises’ Europa 2, I was stunned by the artwork. It’s everywhere, and it’s such a striking, playful collection that — even though the whole ship is exquisitely designed — it dazzles nonetheless. Step into the Elements restaurant, and you’ll be drawn to the Lei Xue vase from the 1970s, which looks like classical Chinese porcelain, but has Disney characters hidden in the patterns. With almost 900 pieces, including those by artists Damien Hirst, Gerhard Richter, David Hockney, Olafur Eliasson, and Hans Hartung, the ship is a floating museum. In fact, there are onboard tours of the collection with a curator, as well as special “art2sea” sailings with notable art dealers, art editors, and artists.

Marina
Oceania Cruises made a serious investment in artwork when the line launched its two purpose-built ships, Marina and Riviera. You’ll see impressive lithographs by Joan Miró, etchings by Pablo Picasso grace the walls of Marina’s Casino Bar, and a dramatic Damien Hirst is featured in Marina’s Canyon Ranch spa lobby. On Riviera, be sure to check out the Picasso etchings in the Grand Bar — you’ll find 16 signed and numbered etchings on the ship. In addition, these two ships and Insignia all feature the Artist Loft, with rotating artists-in-residence who teach classes in their specialties — from watercolor to oils, sketches, collages, or printmaking — encouraging passengers to take inspiration from their surroundings.

Regent Seven Seas Cruises’ self-proclaimed “most luxurious ship in the world” features two authentic Picasso lithographs (which flank the doors to the $10,000-per-night Regent Suite) and a two-ton, cast-bronze Tibetan Prayer wheel, which cost approximately $500,000 and sits outside Pacific Rim, the ship’s Asian fusion restaurant. You’ll also find works by Joan Miró in the Master Suites, a Marc Chagall in the bar of Prime 7 steakhouse, and large canvases created by Eduardo Arranz-Bravo.

While Celebrity Cruises has long been committed to its art collection — the line was first to offer iPod tours — Celebrity Reflection stands out as having a special collection of works, 5,607 of them, each offering a take on the concept of reflecting. Celebrity has done a beautiful job of not taking that idea too seriously, such as with a lighthearted Richard Prince silkscreen from his “Monochromatic Joke Series.” There’s also a mirrored flower sculpture by Jeff Koons and a colorful glass installation by Graham Caldwell. Don’t miss the “Banco (Ground Rules),” a Robert Rauschenberg print layered with foil and text that’s hung in the Passport Bar.