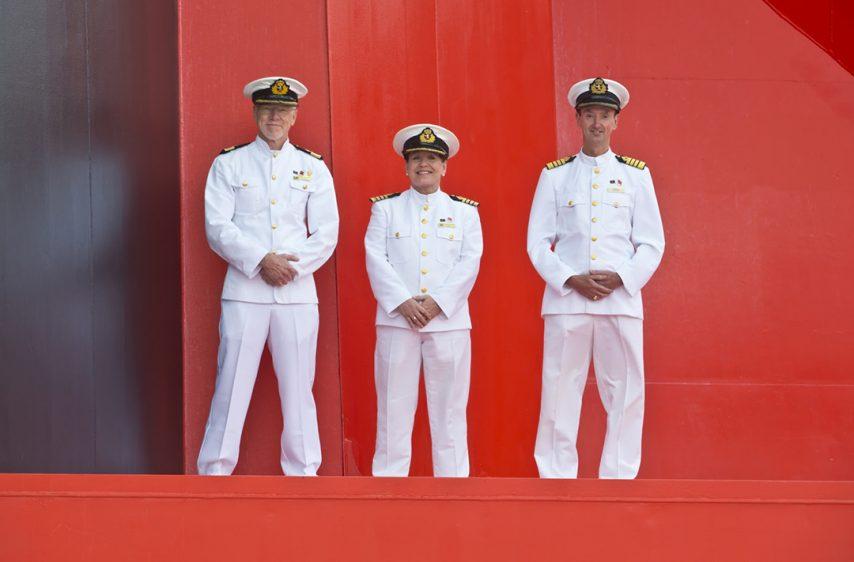 Cunard Line has long been synonymous with the quest for new discoveries. In 1840, Cunard’s first ship, Britannia, left British waters bound for America, so it’s no surprise that spirits were high as Cunard recently celebrated its 175th anniversary since its first iconic transatlantic crossing.

A special collection of remarkable anniversary cruises and events paid homage to significant moments in the company’s illustrious history. These highly anticipated sailings gave loyal and new Cunarders alike the chance to celebrate the company’s history aboard its flagship Queen Mary 2, Queen Victoria, and Queen Elizabeth.

And while celebrations are taking place on every cruise in 2015, with special features and events on board, other significant events recently took place in significant ports as well. From firework-filled skies to well-known personalities and incredible crowds in towns and cities on both sides of the Atlantic, this 175th anniversary has been celebrated in style. Here were five events that made Cunard’s moments so special.

Southampton: On May 4, 2015, Cunard’s three Queens came together for only the fourth time in Southampton in order to kick off the celebrations for the company’s 175th anniversary. A special ceremony saw Queen Mary 2 lead Queen Elizabeth and Queen Victoria out of Southampton Docks before sailing south to Calshot and eventually into open water. It was a rare sight for those in attendance, as it was the first time the three vessels have sailed together in daylight from Cunard’s homeport.

Liverpool: History was also made in the city of Liverpool on May 21, 2015, when Cunard’s three Queens gathered in the company’s “spiritual home.” This was the first time in nearly 50 years that passengers have set out on a transatlantic crossing from Liverpool since Cunard’s Franconia’s last crossing from the city in 1968. Emotionally charged concerts at the Liverpool Cathedral also marked the historic day, and RAF Red Arrows honored the anniversary with a spectacular fly-past over all three ships aligned on the River Mersey. Queen Mary 2 sounded her ship’s whistle at 2 p.m. to signify the time exactly 175 years earlier when Cunard’s first ship, Britannia, left the city’s Coburg Dock and inaugurated the first-ever scheduled transatlantic service.

Halifax: On July 11, 2015, local dignitaries, port officials, and key members of the Halifax community gathered to dedicate a new public space in honor of Samuel Cunard, who was born in Halifax and was founder of the line. Nova Scotia’s popular Rhapsody Quintet performed, and shipbuilding businessman James D. Irving was awarded the first annual Samuel Cunard Prize for Vision, Courage and Creativity. Cunard joined forces with the Canadian Maritime Heritage Foundation and the Maritime Museum of the Atlantic to create the prize, which will be given each year to an extraordinary individual who has demonstrated the qualities exemplified by Samuel Cunard. In addition, president of Cunard North America, Richard Meadows; Captain Kevin Oprey, master of Queen Mary 2; and direct descendants of Samuel Cunard, Hugh Paton and son Geoff, paid their respects to the gravesite of Susan Cunard, wife of Samuel.

Boston: Boston has a unique significance to Cunard as it was the company’s first port of call in the United States and the former home of its first North American headquarters. In the early morning on July 12, 2015, Queen Mary 2 sailed into Boston, and later, Captain Oprey tried his hand at the great American pastime — baseball — when he threw the ceremonial first pitch at the Boston Red Sox vs. New York Yankees game at Fenway Park. At approximately 9:45 p.m., a grand fireworks display produced by Garden State Fireworks marked Queen Mary 2’s departure as she set off toward New York City for the final leg of her 175th Anniversary tour.

New York: On July 14, 2015, the 175th anniversary festivities concluded in New York, where Cunard has been sailing in and out of since Hibernia first called there in 1847. Today, the company is proud to call Red Hook Brooklyn its home since 2006. Sites of the company’s earlier history and its relationship to the city can be seen through the Cunard White Star sign at Pier 54 and the Cunard Building at 25 Broadway, which was completed in 1921 and is considered a New York City landmark. In the afternoon, the anniversary was commemorated by the ringing of the Closing Bell at the New York Stock Exchange by Captain Oprey as a testament to the economic and industrial achievements of the company. Later in the evening, a spectacular light and music show, designed by the acclaimed Quantum Theatricals, marked the finale as Queen Mary 2 embarked on her return journey back across the Atlantic. The show was cast over the ship, illuminating New York harbor and the sky above. The production began at approximately 9:30 p.m. as Queen Mary 2 held her position in front of the Statue of Liberty, available for public viewing from Battery Park.