A Guide to Eating Well While Exploring

People always ask me, “What is the food like on a seventeen day expeditionary cruise?”.  Well, to be honest no one has actually asked me that, yet, but I want to offer my answer and head off eventuality.

I would argue that it’s relatively easy to come up with a rotating roster of creative cuisine for a seven day cruise.  You only need one culinary genius to design seven different menus and once proven to be winners, repeat for the next cruise.  But for seventeen days? I don’t think we have that many dinner entrees in our home repertoire if you take away pasta, pizza and Lean Cuisine. 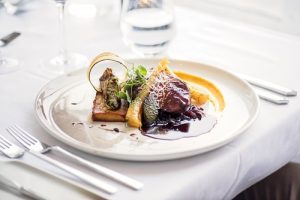 So then, what can one expect from a seventeen day itinerary that bills itself as an expeditionary cruise?  I’m sailing up the west coast of Greenland with Hurtigruten, which bills itself and rightly so, as The Leader in Exploration Travel.  No one books this type of cruise expecting Michelin Star service and cuisine and the cruise line never makes a marketing boast about being an luxury mega ship.  But in reality the food and the ship are pretty darn nice.

Being a Norwegian ship, it’s only fitting that they have a Norwegian head chef so let’s go with a description of Norwegian Fusion!  I’m not sure that there is such a thing, but that’s my take on the food and I’m sticking with it. Dining is an interplay of Scandinavian influence alongside traditionally accepted cruise cuisine.  Does that make more sense? As previously experienced on the sister ship in Antarctica, breakfast and lunches are served buffet style with a wide variety of entrees.  Dinners alternate between full service affairs and buffets, dependent on the day’s sailing schedule.

Let’s address the challenges presented by extended cruises, especially when you have an international guest list. The mix onboard is somewhere around 30% German, 20% American, 15% British and 35% assorted nationalities.  I just don’t see the couple from Frankfurt going gaga over Yorkshire Pudding and the American guy from Peoria probably won’t be too over the moon with beans on toast and a side of pickled herring for breakfast. So, you either have to aim for the middle or simply offer more choices.  I’m happy to report that variety wins.

Let’s start with breakfasts.  It’s a nice take on simplicity but an ample start to the day.

Eggs make a play for the main course, hard or soft boiled with scrambled and sunny side up alternating each morning.  Waffles, pancakes and hash browns take turns in meeting carbohydrate quotas. Bacon makes a play for the favorite side item but add in some European sausages, beans, a spam-like slice of something and yoghurts and those people from over there are a happy bunch.  Then there is porridge, smoothies, fruits, cold cuts and no ship would be worth its claim to being Norwegian unless there was smoked salmon, cod or herring. For light eaters (of which there appear to be none) it’s easy to nosh undercover with a coffee and a freshly baked pastry, croissant, danish, muffin and if you are British, bread for toast (with or without those beans).

Lunch is actually my favorite feast of the day.  Served buffet style, it has more variety than most of the cruises I have been on.  Two aisles of salads, cold cuts, cheeses, vegetables, and have I mentioned the smoked or peppered salmon, cod or herring?  Depending on the day you will also find shrimp salads, calamari or mussels on prominent display. 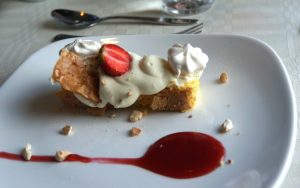 Then there are the main courses.  Over the first few days we have had pork wok, chicken wok, beef wok and vegetarian wok and that is just the woks!  Then there has been roast lamb, pork belly, turkey, chicken and roast beef plus a daily pasta. Of course each day features a soup, vegetarian entree and the potato du jour with veggies.  And, did I mention that there is always a hot fish dish, possibly salmon, cod or halibut? Desserts? Why of course! Ice cream, cakes, tarts, puddings and mystery specialities

Slightly digressing from the onboard dining, I had expected to experience some sort of Greenlandic foods while being ashore.  It would fit my culinary profile perfectly if I could find a street vendor or cafe serving seal, whale, sea otter or reindeer.  To my surprise I’ve yet to locate a restaurant in any of the ports. I guess dining out isn’t a big deal in these remote outpost villages.  Can you imagine a place without so much as a strip mall Chipotle? How can people survive? So, the reindeer soup we had onboard will have to qualify as the most exotic dish so far.  (That is, if you eliminate Norwegian salmon, cod or char…. had I mentioned those?)

Moving on to dinners.  These curiously alternate between set menu, full service meals and elaborate buffets.  I never imagined I would prefer the buffet over a sit down service but the variety of selections has won me over.  There is very little repetition and themed preparation is extremely good. Whatever the appetite, you can find it in the two aisles of appetizers, salads, seafoods and veggies. Two or more main entrees fill the plate with no problem avoiding the embarrassment of asking a full service waiter for seconds!

Theme Nights on an Expedition Cruise

From the plates I’ve seen filled  and emptied, I would say that this international group of adventure seekers onboard are very happy.  I still have my fingers crossed for something exotic like rack of Greenland reindeer topped by Inuit wild blueberry glaze served over whale blubber reduction.  If it doesn’t happen, I’m perfectly content with the variety offered so far, not to mention (but I think I did) the fresh salmon, cod or char.