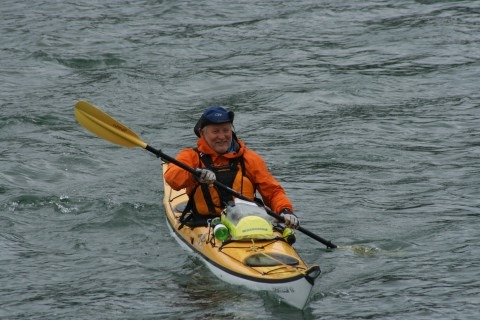 Captain Dan Blanchard, dressed in casual North Face attire, strolls up to a passenger about to board an Un-Cruise Adventures small ship at Fishermen’s Pier in Seattle, thrusts out his hand for a shake, and says “Hi, I’m Dan. I own this company.”

He grabs the passenger’s carry-on bag and carries it down the pier. When it comes to cruise line CEOs, it doesn’t get any more low key, or hands-on, than that.

Blanchard is a product of the Pacific Northwest. Raised in Washington State, he has spent his life around boats, including summers as a kid living on his family’s wooden tugboat.

“Being on the water is as natural as walking for me,” Blanchard says.

His employees say he’s the real thing, a water-loving, nature-loving guy — the personification of the adventure cruise company he runs.

In addition to his interaction with guests at the pier, near the company’s headquarters — and not far from where he lives on a 42-foot sloop — Blanchard has been known to startle passengers on the line’s small ships in Alaska.

He appears suddenly, kayaking out of the quiet of the wilderness of Glacier Bay, and comes aboard to use the hot tub, schmooze and have a few meals before disappearing again.

Alaska has a major role in Blanchard’s career and his psyche.

In 1987, after closing down a boat-import business he had started in his mid-20s, Blanchard saw an advertisement for a day-cruise captain in Glacier Bay. He and his then-wife decided to take their sailboat from Washington up to Alaska to see what was what.

“My life changed that summer,” Blanchard recalls. “Ninety-seven days of running a boat up into Glacier Bay with a park service naturalist at my side. The whole mystery of the natural world — it almost brings me to tears even to talk about it.

“It’s what totally changed my life in terms of how I saw the outside world.”

As a captain, Blanchard was the first employee of what would become small ship line Cruise West.

A dozen years passed and Blanchard decided it was time to tackle one of his life’s goals. He took a sabbatical and for nearly three years, and he, his wife and two young kids sailed the Pacific (on the same boat he now lives aboard).

Returning statewide, he decided a change was in order….