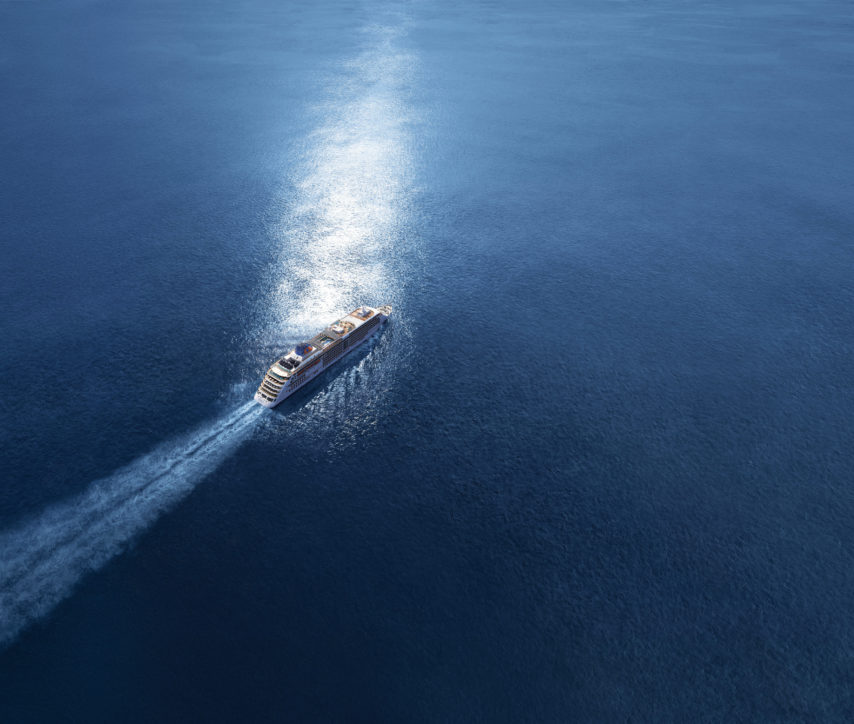 The bad news for Hapag-Lloyd Cruises is that its luxury vessel, Europa, no longer ranks as the Berlitz cruise guide’s top-rated ship.

The good news for the German cruise line: The coveted title was stolen by Europa’s little sister.

In fact, the 516-passenger Europa 2 landed the highest score ever in the 29-year history of the Berlitz Complete Guide to Cruising & Cruise Ships, which is considered a leading authority on the cruise industry.

Christened last year in Hamburg, the $360 million Europa 2 is helping redefine high-end cruising with a modern twist. It’s done away with formal nights, regimented dinner seating times, and other stuffy traditions. But it’s hung on to some of the old favorites — impeccable service, sophisticated entertainment, and caviar. The ship also added more flexibility, 21st-century design, and shorter itineraries that square nicely with tight vacation schedules.

Europa 2 hits that sweet spot of relaxed luxury, catering to a younger clientele than its esteemed predecessor and appealing to a new generation of affluent cruisers whose tastes skew more contemporary than classic.

Like Europa and other top-shelf ships from the likes of Seabourn and Crystal Cruises, Europa 2 is designed with deep-pocketed passengers in mind. But don’t let the German address of Hapag-Lloyd’s headquarters fool you. Those deep pockets don’t have to hold European passports.

In fact, the cruise line is making a concerted push to attract North Americans and Brits looking for the same level of uber-luxe water travel as their well-heeled German counterparts. Think of Europa 2 as Hapag-Lloyd’s Manolo Blahnik stiletto trying to get a foothold in the English-speaking market.

The ship is the fleet’s first fully bilingual vessel. All onboard announcements, menus, and other printed materials come in both English and German. Dining options — and there are many — range far beyond wiener schnitzel and sauerkraut.

While there aren’t as many shore excursions offered in English as German, they are available. And because there are far fewer passengers to book them, they often end up feeling more like a private tour than a typical group expedition.

I rarely had reason to break out my rusty high-school German during a 7-night Mediterranean voyage last summer aboard Europa 2. The late June journey started in the colorful Spanish city of Barcelona followed by a welcome day at sea. This gave my husband and me ample time to poke around the ship’s myriad entertainment venues, watering holes, spa, and fitness center. It also allowed us to plot a dining strategy that would ensure we’d hit all eight — eight! — of Europa 2’s restaurants at least once.

Our well-paced itinerary continued on to the windswept shores of Corsica, where islanders were preparing to welcome the Tour de France. Then it was off to a postcard rack’s worth of idyllic spots dotting the French and Italian rivieras before ending in high style in Monte Carlo.

The ship’s 251 suites — all with generously sized private balconies — are sleek and light, dominated by clean lines that are a hallmark of modern European décor. More elegant than trendy, each is tricked out with Wi-Fi, a flat-screen TV, Nespresso machine, and minibar stocked with complimentary beer and soft drinks. (Hapag-Lloyd has yet to follow the lead of other luxury cruise lines that have embraced the all-inclusive model for alcohol. Guests pay extra for wine and spirits.)

Suites come in seven categories, including family apartments connected by a door and veranda. Children under 12 sail for free; ages 12 to 15 pay a $60 supplement per night. At 301 square feet, even the smallest suite is twice as spacious as many standard cabins. The largest measures a sprawling 1,066 square feet.

With a bigger footprint than Europa, the newer ship boasts one of the largest space-to-guest ratios in the industry. And while Europa 2 feels plenty commodious on board, it’s small enough to dock at tinier ports such as tony Portofino, where we were the sole cruise ship docked among a smattering of one-percenters’ yachts.

With a crew numbering 370, Europa 2’s bragging rights also include a sky-high staff-to-passenger ratio, which explains the many attendants roaming around, passing out chilled bowls of sorbet to sunbathers by the pool. If the weather doesn’t cooperate, a retractable glass roof covers the long swimming hole.

Every crewmember we met, from sorbet slingers to housekeepers, massage therapists to the waiter whipping up steak tartare tableside, not only spoke English but seemed genuinely eager to do so.

The same could be said for most of our fellow passengers. While Europeans generally are more reserved than Americans, many were happy to exercise their English and engage in some small talk with us Yanks. More importantly, they added a level of authenticity to the cruise. Personally, I like being around Europeans when traveling in Europe.

The ship’s international hostess checked in with us at least once a day to make sure all was wunderbar. And when we were the only native English speakers who turned up for a Mediterranean wine tasting, the German sommelier obliged by waxing on about vintages and flavor profiles in both languages. The Turkish-born chef who taught us how to poach foie gras and bake brioche in the ship’s intimate culinary school did so in flawless English, which brings me to the next topic: food.

One of the most striking features about Europa 2 — and one that speaks to a clientele less beholden to old-school cruising — is the impressive array of dining options. French. Asian. Italian. Classic. Casual. The only thing they have in common is the high caliber of cuisine.

We showed up at the sushi restaurant for dinner after spending the day pedaling the ship’s free-to-rent bicycles around Pisa and Lucca. Too tired to pore over the menu, we asked the waiter and chef to surprise us. That they did, delivering the freshest sashimi, tastiest maki, and crispiest tempura I’ve had outside of Tokyo.

Europa 2’s eateries, which do not carry surcharges, have no set meal times or fixed seating plans. It’s largely up to you when and where you dine. It’s still a good idea to reserve a specific night at the most popular venues: the French brasserie (my favorite) and the Italian Restaurant Serenissima.

Europa 2’s sophomore sailing season includes maiden calls to the Caribbean and South America, as well as a visit to New York City and Miami before returning to Europe in spring 2015. That’s ample time to become fluent in all the German you need to know: Sprechen Sie Englisch?