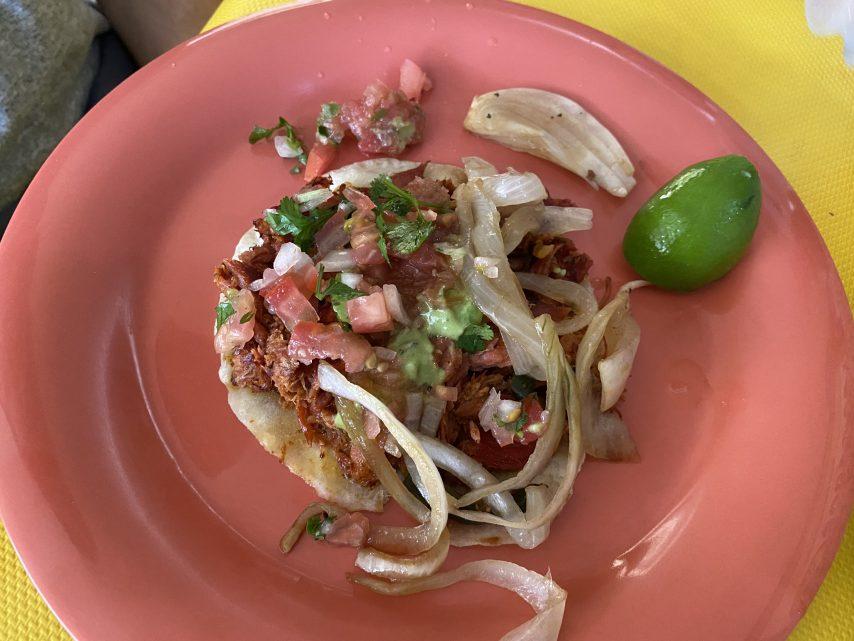 The question of the day; You’re in Mexico and hungry. What’s the one quick bite you think of? It’s a taco of course! As a vicarious foodie follower, you know that my go to solution for hunger pangs is a food tour and with a visit to Cabo San Lucas it’s no different.

After savoring the delicious and exotic creations like octopus, sea urchin and soft shell crab tacos at The Cape, Cabo’s ritzy upscale hotel, I had a hankering for some street taco treats and signed up for the popular Juan More Taco food tour. 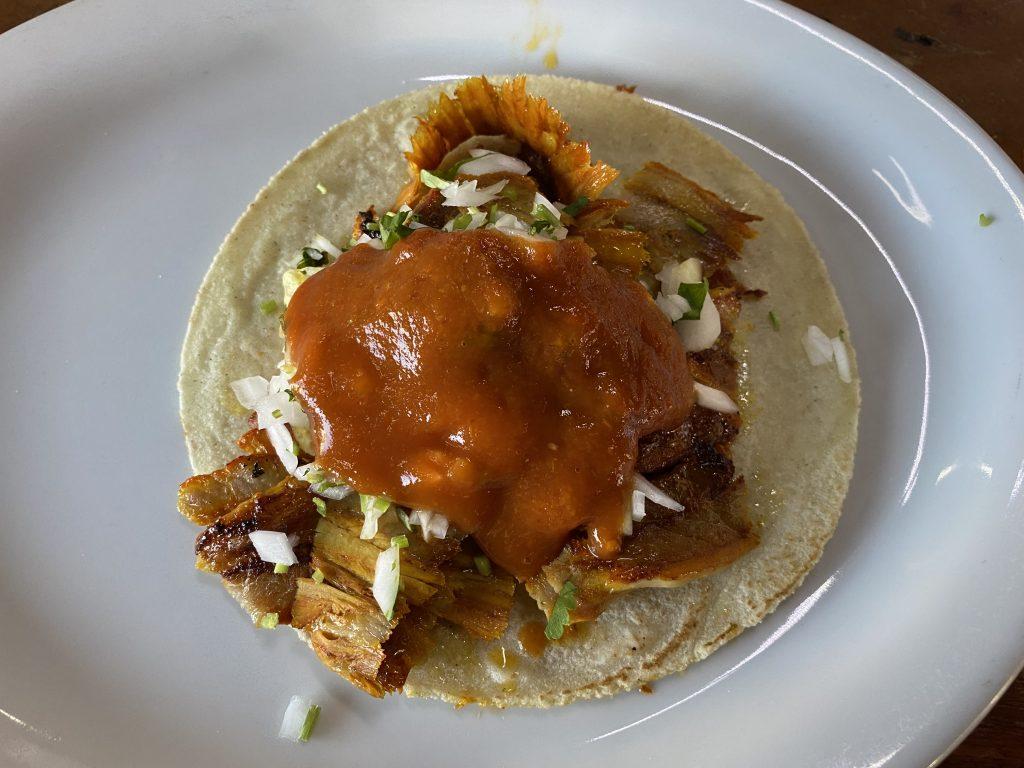 On The Taco Trail

It’s 5:30 pm, the sidewalks are bustling with locals making their way home after a day’s work. We’re meeting up with Issi, the well known food guru of Cabo for what turns out to be an exploration into a world of authentic noshing at local taquerias. Mingling with locals is always our plate dujour and we head straight for Los Tacos May, a literal hole in the wall cafe. (Spoiler alert: timid eaters beware, we are entering the twilight zone of tacos).

Label it exotic or unheard of but by all means call it delicious! Let’s start with a Corazon de la vaca taco, (cow heart), move on to tender and tasty cabeza surtida taco, (beef head and cheeks), and who could turn down a lengua taco (tongue). You want something local and different? This is the place!  Initiated into the world of weird with some ‘street cred’ under our belt, we can now say we are truly dining with the local crowd 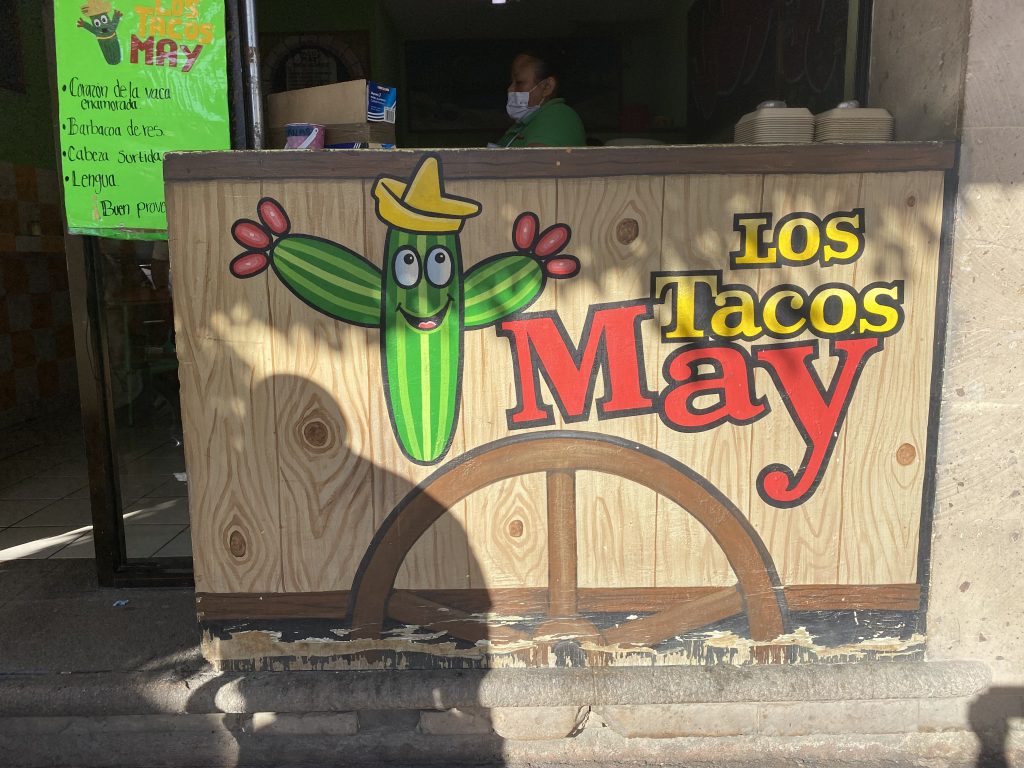 Everyone has no doubt at some point enjoyed a Baja Fish Taco, but none could possibly be more authentic than what we indulge in at our next venue.  With a generous serving of lightly battered fish and shrimp, tempura style, it is simply served on a warmed soft shell corn tortilla. But this isn’t where it ends. We are led to the salsa bar where you DIY your plating with sauces and condiments of your choice.  Pico de Gallo, habanero, serrano, poblano or OMG pepper sauces, lettuce, tomato, cheese, onions and unlimited salsas. Decorated to the hilt, these tasty morsels aim for and hit the spot with gastronomic accuracy.  Perfecto!

Stomachs already approaching capacity, Issi introduces us to a young vendor offering an assortment of sweets and spiced nuts and beans. Sweetened up, we rendezvous with Antonio, whose family has laid claim to the same street corner for years armed with three stainless steel tubs full of steamed, corn husked tamales. Chicken, pork, beef, mole and tomato and cheese versions line the tubs with enough to serve up to 1000 tasty tamale per day.  Fantastico!

Off to the diagonal corner, we tease the taste buds and cleanse the palate with a fresh fruit popsicle from another local institution. We choose a soursop, mango and lime but name the fruit and they have it. Delicioso!

Being from Nebraska I consider myself a corn expert. I know the difference between sweet corn and field corn but the version I’m about to describe defies anything a Midwesterner could understand. Take a bag of Doritos, slice it open lengthwise, crunch them up a bit, add in a generous helping of roasted corn kernels cut off the cob, top with a thickened mayonnaise type of cream and sprinkle on some cheese and chili pepper. Mix it up and voila… Carbs in a bag!  Not my cup of corn, but judging from the queue of hungry customers it’s obviously an acquired taste. 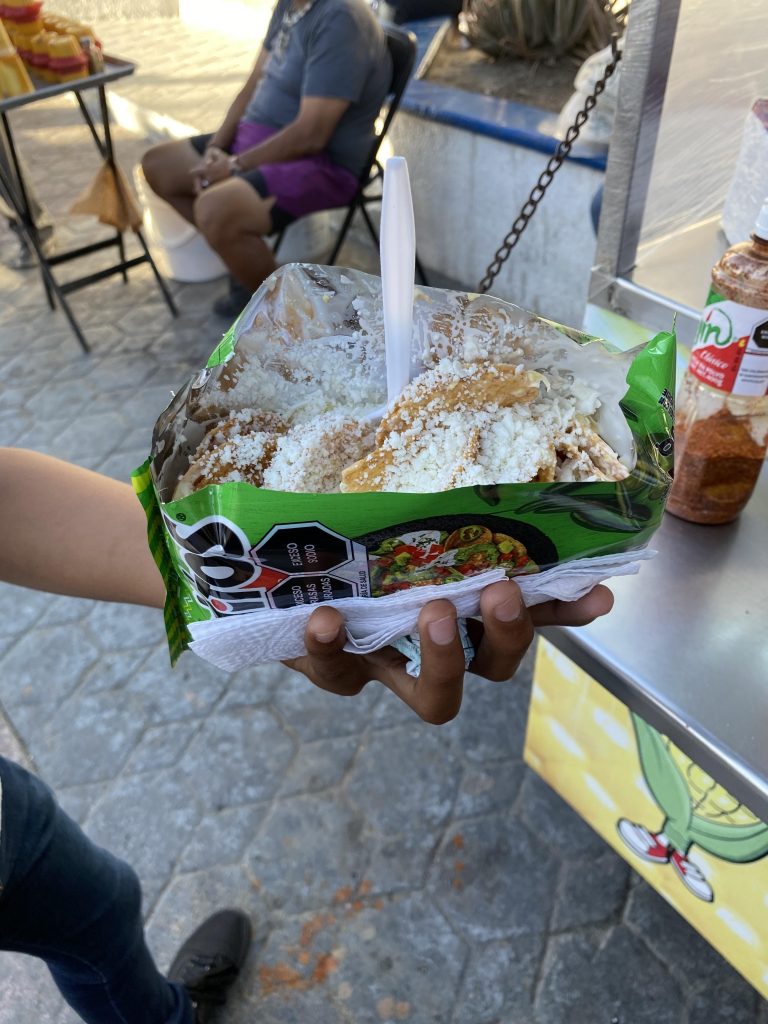 The origin of tacos is actually unknown but taco historians, (a specialized field I would assume) believe that it possibly originated in the silver mines of Mexico. The word taco is derived from the little explosions used in excavating ore from the mines back in the 18th century. Another version of taco trivia indicates that it may have predated the arrival of the Spanish with evidence that indigenous people ate tacos filled with small fish.

Tacos first appeared in the United States in 1905, made by The Chili Queens, a group of women serving Mexican food at festivals. The hard shells we eat today are an Americanized version that is significantly different than the soft version of authentic corn tacos in Mexico.

Whereas there are many versions including steak, chicken, fish and even vegetarian, the arrival of pastor is especially intriguing. Our next location serves a legendary taco pastor, which is actually more Lebanese than Mexican. Introduced to Mexico in the 1930s by Lebanese immigrants, the meat is cooked on a vertical spit and shaved off into thin morsels similar to a Turkish kebab and served on a flour tortilla topped with tomato sauce, onions and cilantro. Mama Mia!

To finish off the parade of taco treats, we make our way to a street cart for a date with dessert destiny, churro heaven!  These fried tubes of temptation, rolled in cinnamon and sugar and topped off with vanilla or chocolate sauce are the piece de resistance of any night on the town.

Forget Taco Bell, Chipotle and a slew of others. Leave the El Paso Taco Kit on the shelf without remorse. Juan More Taco is all you need for immersion into authentic Mexico.