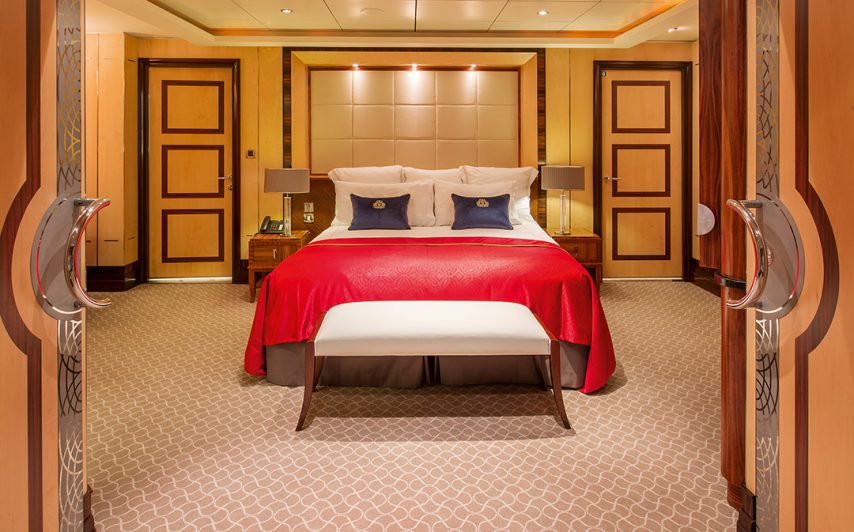 Behind the Remastering of Queen Mary 2

When your task is to redesign and contemporize the 12-year-old Queen Mary 2, Cunard Line’s flagship ocean liner, you know a lot of eyes will be watching. Many cruisers dream of crossing the Atlantic aboard this iconic ship, so when it came time to “remaster” the interior and onboard experiences, Alison Clixby, Cunard’s director of hotel design and projects, decided to borrow a page from history.

“The original ship was a true inspiration and provided a wealth of Art Deco features and details to work with in creating the new design for Queen Mary 2,” Clixby said.

Much of the $132 million bow-to-stern redo took place this spring at Hamburg’s Blohm + Voss Shipyard, where the ship was out of the water for 21 days and in the water for another four. During this time, Queen Mary 2 actually grew with the addition of 50 staterooms (15 for solo passengers), making it now a 151,000-ton, 2,705-passenger (based on double occupancy) ship.

At the shipyard, cranes carefully placed eight blocks of prefab Britannia Club and interior staterooms in place on Deck 13. Nearly every interior space was torn apart, and anything that wasn’t was carefully covered in sheets of plastic. If this was your house being redone, you’d have to relocate for months.

Yet somehow Clixby, who’s worked in shipbuilding for 25 years with Cunard and Carnival UK and is a rare female presence at the shipyard, was cool as a cucumber.

“As always, with such an important and major project like this, we went through many iterations during the development phase, making sure every detail was precise and on concept,” Clixby explained.

When Queen Mary 2 launched in 2004, with HRH Queen Elizabeth serving as godmother, the ship was the largest in the world. (A title it held only for a short time.) Still, more than a decade later, there was a lot of space to update.

Over one million man-hours went into the project, and more than 300 shipping containers arrived to the shipyard, bringing, among other things, nearly 594,000 feet of new carpeting in 26 stunning geometric patterns inspired by the original Queen Mary.

There were also some 6,500 pieces of new furniture; new bronze, brass, and marble fittings; and 3,900 gallons of paint for both the interior and exterior of the ship, including environmentally friendly paint for the…