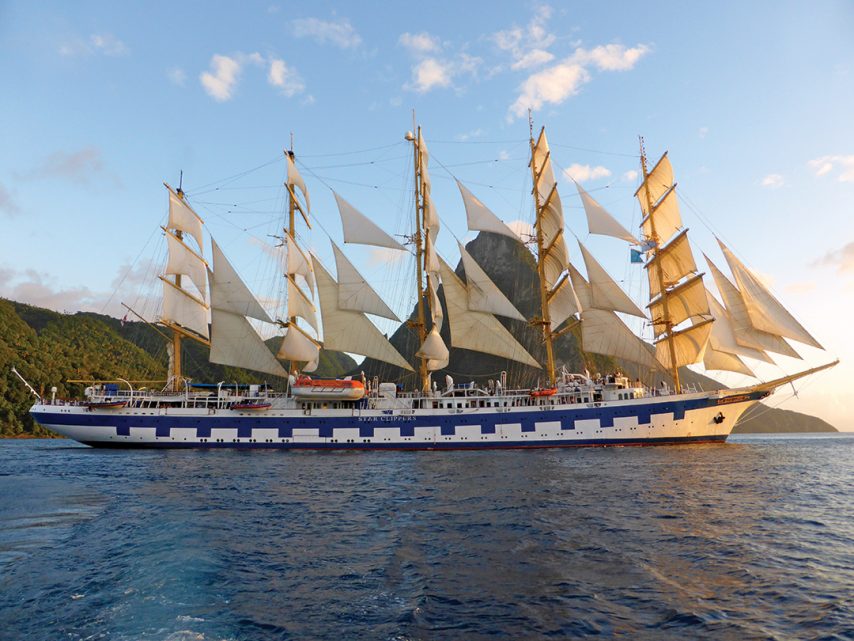 How the faces of cruise ships have evolved

With the passage of time, passenger ships’ bows have come in an assortment of shapes and sizes. To accommodate evolving aesthetics and technology, their form has morphed from sleek and clipper-like to vertical, raked, bulbous, and varying combinations of each.

Back in the Day

That concept of “when men were men and ships were ships” harks back to the Horatio Hornblower era of clipper ships, whose long, pointed bows sported tusk-like bowsprits. Besides providing more sail volume to propel the hull they were attached to, they were stunningly beautiful apparitions. But by the late 1880s, when the age of steam finally eclipsed the need for sails, clipper bows fell completely out of style.

From that point, such elegant prows were mostly relegated to luxury yachts, a notable exception being one of the world’s first cruise ships, Clipper Line’s diminutive, deluxe Stella Polaris of 1927. Happily, with the passage of time and like almost every fashion that is rendered obsolete, the clipper bow would make a vigorous comeback, albeit with some alterations. For those looking for the real thing in today’s cruise fleet, the wind-enhanced ships of Star Clippers sport true clipper bows, bowsprits and all.

The image is so vivid of a knifelike vertical prow slicing through the eerily calm waters of the North Atlantic, suddenly turning hard to port but not in time to avoid contact with the massive iceberg that would send the ship and 1,500 of its occupants to a chilly death. When Titanic entered service in 1912, her bow, a finely pointed, 90-degree wedge designed to slice through the seas, was considered state of the art. Almost all of the great liners, from the waning years of the 19th century through the stately Ile de France of 1927 boasted similarly regal, aristocratic noses.

Gradually, in response to the burgeoning streamline form, the vertical bow became more angled or raked during the early years of the 20th century. Famous examples of the raked bow would be Cunard Lineʼs first “Queens,” Queen Mary of 1936 and her running mate, the slightly larger Queen Elizabeth of 1940. Raked bows could also be curvaceous, as exemplified by the Dutch Art Deco flagship Nieuw Amsterdam of 1936, a sublimely elegant liner whose likeness lives on in Holland America Line’s logo.

What lies beneath the waterline has a profound effect on how efficiently a ship moves. Borrowing a technology vetted with war ships, the imposing German Bauhaus liners Bremen of 1929 and Europa of 1930 were the first major passenger ships fitted with a bulbous bow. Although the additional mass seems counterintuitive, the bulb form actually pushes water….