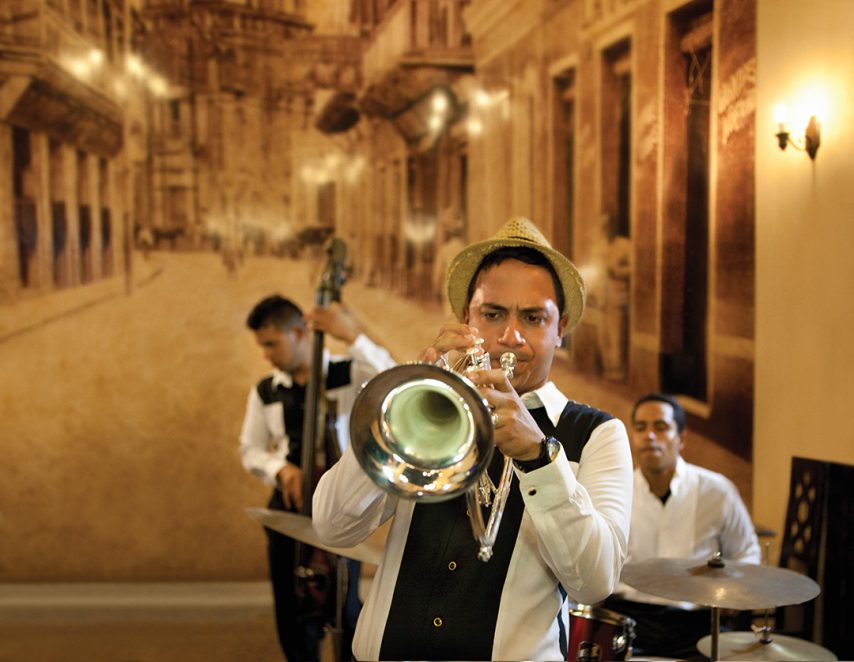 Porthole sent two travel writers on different cruise ships to experience this mysterious, magical destination and report back. Here’s what they found.

By Sharon Kenny
“Are you from the American cruise ship?” asked the young woman showing me Cuban art posters at the flea market in Havana. “Yes we are,” I nodded. “We just arrived this morning.”

“We heard you were coming but we didn’t know when,” she said, smiling broadly. “We’re so glad you’re here. We’ve been waiting for you for so long.”

I felt a lump in my throat at her sincerity and unexpected emotion. Encounters like this happened over and over that week in Cuba. I was lucky to be among the 700 Americans on the first cruise ship sailing directly from the United States to Cuba in decades. Turns out, it was an exhilarating, draining, and dumbfounding experience, as everything I thought I knew about Cuba turned out to be wrong.

Fathom’s only ship — the 704-passenger Adonia, which is on lease from P&O Cruises — was recently renovated with a handsome dark wood interior, much like a traditional, elegant ocean liner. My balcony stateroom was quiet and comfortable with a sofa and desk and room for two chairs on the balcony. Beautiful public spaces include three restaurants, a full-size library, and several options for live music, dancing, hanging by the pool, or getting away by yourself. For me, the biggest surprise was the retail spaces, which offer unique Fair Trade clothing, jewelry, cosmetics, and regional products. Other onboard activities and learning opportunities include Cuban music, cuisine, and activities such as dance lessons or an authentic Cuban cocktail class.

Launched this year as Carnival Corporation’s 10th global cruise brand, Fathom is designed for “social impact travel” — enriching the lives of its travelers while driving large-scale, sustainable social improvements. Weekly itineraries alternate between cruises to the Dominican Republic, which aim to help and improve the local community through a variety of on-ground activities, with the Cuba itinerary that was created as an immersive cultural exchange experience that provides opportunities to learn more about the everyday lives of the Cuban people and their remarkable culture through interaction with artists, musicians, business owners, and families.

Fathom is the first cruise ship company to have received both American and Cuban approval for travel from the United States to Cuba in decades. Making it easy for travelers, Fathom looks after all the necessary travel visa requirements as well as current People-to-People travel requirements. …

I first visited Cuba nearly 30 years ago, and thought the 1950s-era American cars cruising Havana’s streets were old then. And when I boarded Celestyal Crystal, which previously had been cruising fulltime through the Greek Isles, I thought it seemed an unlikely candidate for pioneering voyages to Cuba. After sailing aboard the last weekly cruise of the 2015-2016 season, here’s what I found.

Originally launched in 1980, the 960-passenger Celestyal Crystal has been rebuilt, refurbished, and changed names and owners numerous times. With the ship now in Caribbean waters, the Greek mythological names of her decks (Hera, Zeus), dining rooms (Olympus, Amalthia), bars (Helios, Thalassa), and other public areas seemed incongruous, but didn’t detract from their appeal.

I especially liked the wraparound promenade on Dionyssos Deck 5, which led aft to the breeze-kissed Thalassa bar, where I joined fellow passengers relaxing with mojitos and daiquiris under the stars. The casual Leda buffet near the pool was bustling at breakfast and lunch, while the two well-appointed dining rooms — where moussaka made way for Cuban roast pork — were the popular choices at dinner.

The double-deck Muses Lounge hosted daytime lectures and after-dinner entertainers such as singers, dancers, and acrobats, often with a Cuban spin. A disco, a small casino, and the smaller Eros Lounge provided other evening venues for music, dancing, drinking, and gambling, while a gym and spa offered chances to work off steam — or bathe in it. Wi-Fi is available only in public areas and outdoor space is sufficiently roomy.

Cypriot-owned Celestyal Crystal has been sailing a weekly “Cuba Cruise” from Montego Bay, Jamaica, to Cuba and back each winter for the past three seasons. At first, the cruises attracted mostly Canadian and European passengers, but in the wake of the recent U.S.-Cuban rapprochement, Americans are rapidly filling an increasing number of cabins. …