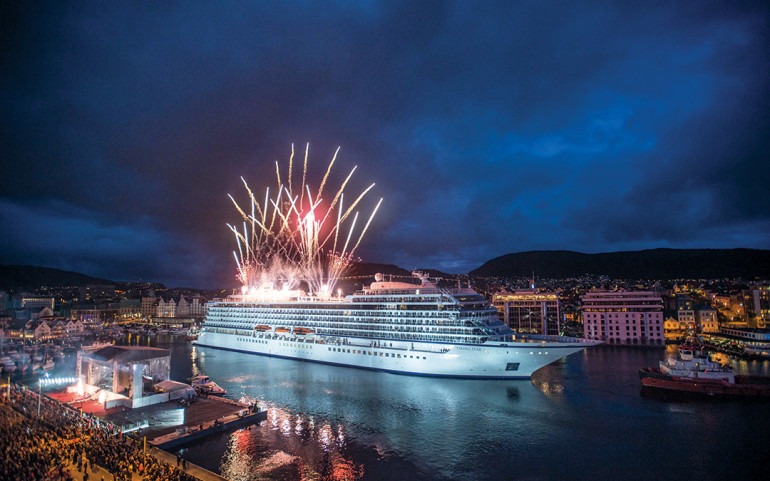 A Star Is Born

Viking Ocean Cruises debuts with a flagship like no other: Viking Star

Standing in your swimsuit in the first-at-sea snow room aboard Viking Star, snowflakes gently falling from the ceiling, your feet in snow and your body absolutely freezing in sub-zero temperatures, you can’t help thinking about the Vikings. If the Norsemen caused drama on the high seas, well so does this ship. The snow in the spa’s Snow Grotto is good for your health. A cruise on Viking Star is good for the soul.

After pretty much defining modern river cruising with his 60-ship river line, Viking River Cruises’ quirky, Norwegian-born chairman Torstein Hagen set out to redefine ocean cruising. The pointy-nosed Viking Star is only the first of several Viking Oceans ships planned. (Sister ships Viking Sea and Viking Sky arrive in 2016 and 2017, respectively.) Viking Star is sailing this fall and winter in the Mediterranean before spending the summer in the Baltics.

Hagen, whose background includes running the old and much-loved Royal Viking Line, vowed to do things differently in launching the first new ocean line in more than a decade. His 930-passenger, Italian-built, Norwegian-flagged ships would do destination-intensive itineraries that feature more time in port (including overnights in ports of embarkation and disembarkation), would be for adults age 55-plus, and would have “no nickel-and-diming,” he proclaimed.

Pricing on Viking Star follows the river ship model with many amenities included in the cruise fare such as a shore excursion in every port (with more elaborate tours for sale), wine and beer at lunch and dinner, specialty dining, and unlimited Internet access.
Setting out to create a new niche in ocean cruising, Hagen made clear he wouldn’t mind if competitors were to quiver in their shoes thinking, “the Vikings are coming, the Vikings are coming.” There may be a lasting influence based on not only what is included in the fare, but also on Viking Star’s clever and surprisingly elegant ambiance. (Think Four Seasons hotel).

This is a flagship like you’ve never seen before, from the sexy infinity pool that seems to drift into the ship’s wake to the airy and subtly colored modern Scandinavian décor to the historic and cultural Nordic references throughout.

Yes, that’s a reproduction of the entire Bayeux Tapestry depicting the 11-century Battle of Hastings on view as you walk the decks of the ship’s fore and aft staircases, and that’s an original Edvard Munch (of “The Scream” fame) lithograph near the excursions desk.

The atrium, with its grand staircase, is not you typical atrium. The three-deck space is The Living Room, creatively divided into nooks and crannies for socializing. With the addition of knickknacks and throw blankets and a collection of interesting new and vintage books, you may curl up and hang out here as you would at your family’s summer cottage.

Want views? Head up to the extraordinary, two-deck Explorer’s Lounge, where you can look forward through double-height glass windows and where constellations twinkle as part of the design at night. Don’t be surprised if you’re distracted from the views by a stunning collection of curios that display shell collections, maps, and navigational equipment.

The light-filled, glass-enclosed Wintergarden, a venue for elegant afternoon tea, with an impressive menu of tea selections, is a fantastical space. (Think Alice in Wonderland meets Norse mythology.)

Hagen says his passengers aren’t necessarily the sun-worshipping type, so the pool deck is impressively expansive and cushy and covered for all-weather use. Big money was spent on décor, and while Hagen calls himself a minimalist and would prefer talking about the natural materials such as birch twigs and stonework, look closely and you’ll spot Frank Gehry Cross Check chairs in the Wintergarden and oil paintings by noted Norwegian artist Jakob Weidemann in a corner of the main dining room.

Hagen’s proud “everyman” influence shines in other areas. For instance, if he had his druthers, he’d eat casual and outdoors. So Viking Star’s World Café buffet has sliding doors that open on both sides for outdoor dining. The buffet features the same dishes as the dining room, plus the addition of an amazing cold seafood bar at night.
For his dream ship, Hagen also added other personal touches. For instance, every chair in every restaurant is squared in back so that a man can hang his jacket; wastebaskets in cabins are square so you can more easily throw something in from across the room. Even the dining room has an outdoor seating option and windows that open to let in ocean breezes. And Hagen says that his passengers could care less about a casino; they’d rather have free laundry.

There is a wonderful democracy at play on board when it comes to accommodations. Everyone gets a spacious (270-square-feet and up) and well-designed cabin with a veranda, coffeemaker, large shower, and the special treat of a heated bathroom floor.

The 14 Explorer Suites up the score with separate living rooms and bathtubs. The one-of-a-kind, three-bedroom Owner’s Suite (truly designed for Hagen himself when he’s on board) features a boardroom, an oceanview sauna, and a gas fireplace. The décor also includes a collection of Hagen’s personal photos, his childhood stamp collection, and his favorite science books.

In the adjacent Norwegian deli, Mamsen’s (which means mama’s in Norwegian), you can get made-to-order waffles, herring, open-faced sandwiches, and cakes based on Hagen’s mother’s recipes. It’s one of several impressive dining venues.

Another culinary must-do is a Black Angus Viking Burger at the pool grill. Also, don’t miss dinner at the complimentary specialty restaurant Manfredi’s Italian restaurant, which features marinated steak and lasagna and other dishes created with Manfredi Lefebvre, chairman of Silversea Cruises and a good friend of Hagen’s.
The Chef’s Table, where themed five-course menus (such as sweet & salty) are paired with wine and educational videos, was a work in progress on our early sailing, but showed promise.

Foodies who want quality time with the executive chef should check out The Kitchen Table, a well-equipped cooking school where a dozen students accompany the chef to a local market in ports such as Barcelona and Bergen, and then help prepare a meal (a charge applies).

Just as carefully curated as all the nooks and crannies are options for free time on board. When you’re not reading or admiring Viking trinkets here and there, you can watch a movie or even recorded TED Talks in the theater (which can cleverly be divided into two spaces for concurrent programming), get briefed by a historian on places you’ll visit (there are several lecturers on each cruise), or socialize during organized events such as the Knit & Chat session.

The Nordic-centric spa is a beautiful marvel to behold, especially with its hot and cold wellness treatments: You warm up in the heated saltwater hydrotherapy pool or in the sauna or steam room before getting your blood circulating in the snow room. The entire spa experience draws upon the holistic wellness philosophy of Nordic culture.

The crew of 477, mostly with experience in hotel or cruise and some from the line’s river ships, showed surprising ease at adjusting to the new surrounds. Bartenders even remembered passenger preferences.
To say Hagen has succeeded in making a splash with his first Viking Ocean Cruises ship is an understatement. Nothing on Viking Star feels mass market or crowded. What you get is the perfect amount of flash combined with a whole lot of depth.

Finding both subtle and brazen Nordic and Viking references aboard Viking Star is part of the fun. So don’t miss the opportunities to: