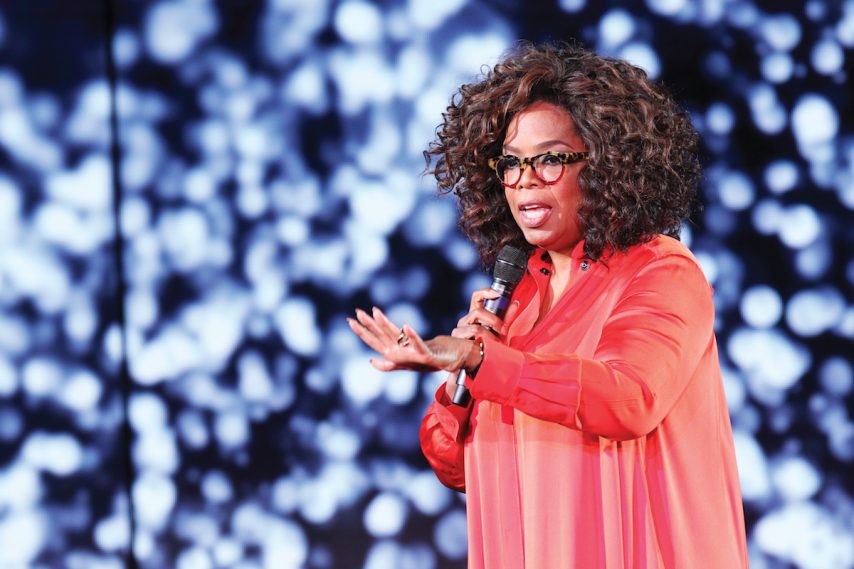 What happens when you get 2,400 women together on a cruise ship for a Girls’ Getaway with Oprah Winfrey?

Tons of laughter, loads of camaraderie, and hugs and tears resulting from both. Even Oprah herself was moved by the experience.

At the end of the cruise, as she was about to christen Holland America Line’s Nieuw Statendam, she professed: “I’ve had the most blessed life of anyone I know … I’ve never seen anything like these past three days. It’s one of the best things I’ve ever done.”

By most standards, this was a very short cruise — just three days and three nights — but for many of those aboard it was their introduction to cruising, and the fact that Oprah was actually on board too, with her own best friend Gayle King, made it a chance not to be missed.

The power of Oprah as a lifestyle and brand permeated the entire cruise, from the food on the Lido (featuring Oprah’s favorite salad) to onboard activities like O’s Reading Room book discussions, to a fashion show with O, The Oprah Magazine’s creative director Adam Glassman, who after the show led the audience in a parade to the retail shop where he personally helped women style themselves with the clothes featured in the show. Like virtually everyone else on the cruise, Glassman was the perfect host, sticking around until everyone got individual attention and help.

Having just celebrated her 65th birthday, Oprah’s “Conversation with Oprah,” in the main theater every day was personal and inspirational. “I don’t do anything I don’t want to do anymore,” she explained. “This [cruise] is a gift back to yourself … Nobody can find us!” she said to laughter from the audience. It was classic Oprah, and most of the audience knew the story already: how she grew up poor and got her first big break in the movie The Color Purple. But she interspersed that story with lessons learned along the way. “You become what you believe,” she urged the rapt audience. “Pay attention to what you actually want.”

Each talk ended with a Q&A with best friend Gayle asking questions submitted in advance from audience members, whom she called to stand up or even join them onstage. You couldn’t help but be moved by the stories of women who shared personal struggles and how Oprah had inspired them.

The association between Holland America and O, The Oprah Magazine started in 2017 when Oprah let it be known that she had never been to Alaska. Oprah’s July 2017 Alaska cruise on Holland America’s MS Eurodam was an enormous success and was featured in the January 2018 issue of the magazine. In 2018, several Adventure of Your Life cruises included members of the editorial team and special guest speakers. But a cruise just for girlfriends, and to a warm destination like the Bahamas, was a new idea, one that even Oprah needed to be convinced about. Like most of us, though, after only three days, she was anxious to come back.

The design of Koningsdam three years ago was a game-changer for Holland America Line and ushered in a new modern era in this beloved cruise line’s 145-year history. Nieuw Statendam, built on that same Pinnacle-class platform, has improved what was already great and made adjustments where it wasn’t. Many of these new features are already being incorporated on other Holland America ships.

The biggest and best change is to Music Walk at the heart of the ship. This concentrates the nightly live entertainment along one main corridor, meaning you no longer have to walk from one end of the ship to the other from the top deck to the bottom looking for the party. The party is always here and it’s almost always lively.

On Nieuw Statendam, Music Walk now features the Rolling Stone Rock Room (a change that was also made on Koningsdam). This has created a seamless entertainment experience each night as cruise guests can dance between B.B. King’s Blues Club and the Rolling Stone Rock Room without missing a beat. Lincoln Center Live performances are now held earlier in the afternoon and evening and share space with the much larger blues club.

The restaurants on Nieuw Statendam are identical to Koningsdam (including the popular Rudi’s Sel de Mer) but Club Orange is a new feature — a private dining venue for Neptune and Pinnacle suites. A limited number of guests on each cruise can upgrade to Club Orange status for a $50 daily charge.

The Holland America ships have a well-deserved reputation as floating art galleries and Nieuw Statendam is no exception. The art on this new ship is modern and avant-garde, playful and sometimes puzzling. Many new cruise ships think bigger is better and invest in big gestures and massive spaces. The individual art pieces on Nieuw Statendam (and the other Holland America ships) are hundreds of small unique gestures. It’s the icing on a big beautiful cake that brings joy and delight around every corner.

“When are we going to do it again Orlando? Where are we going next?” Oprah shouted to the President of Holland America Line, Orlando Ashford, at the conclusion of her speech before she officially became the new ship’s godmother.

There are no details yet, but the cruise executives aboard, including those from other Carnival Corporation brands, talked openly about how to replicate the experience and especially some of the unique activities.

I often say to people who have never experienced a cruise that it’s kind of like being a kid again, except you’re of legal age to drink alcohol. You don’t have to worry about transportation or where to eat, you can visit interesting places during the day, and you’re entertained every night. If you like watching movies, go up on deck for the movie under the stars; if you like live theater, go to the show or the comedy club; or if you want to dance, get on the dance floor and dance your heart out. For the entire time, you can give up responsibility for all the mundane things and just have fun. The captain and his crew are driving, the staff on board are going out of their way to make sure you’re happy. What could be better?

On the Girls’ Getaway however, it was better. For many, there was the added relief from the stress of kids, a spouse, or taking care of parents — always being the one to make sure everyone else was happy. No one was married, or divorced, or single, or anything other than here with a girlfriend.

If there was one feeling shared by all aboard, it was that we were the lucky ones who actually got on a cruise of a lifetime which sold out in less than 24 hours.

That spirit of freedom and camaraderie culminated on the last official night of the cruise in a raucous, ship-wide pajama party. I’ll admit when I saw this party on the agenda I didn’t have a clue what to expect. I haven’t been to a pajama party since I was in middle school, when we mostly played with a Ouija board and danced to our favorite records. Well, Oprah’s pajama party was kind of like that too, except the only spirits on board were the tequila shots Oprah was handing around! About half of the women were wearing the same Oprah-branded pajamas that Oprah was wearing herself (which you could buy in advance or in the onboard shop) or relaxed pj’s from home and fuzzy slippers. Even a few of the 57 men who had somehow found themselves on this Girls’ Getaway ventured out onto the dance floor that night in their pajamas.

As a frequent traveler and cruiser I’ve had some amazing trips in my life. How could a 3-day cruise to the Bahamas be maybe my favorite cruise ever?

It was the community that was created on board. I always feel cruise ships create a community of people; it’s why when you run into someone from your ship on shore, you feel an immediate connection. But this Oprah Girls’ Getaway was unlike any other. No one came on this cruise for a romantic time alone with their spouse or for family time. We were all here with a girlfriend to have fun. I could see my girlfriend and I reflected in the other women aboard with their girlfriends. Maybe that best friend also happened to be their daughter or their mother, but it was a commonality that transcended culture, education, or age.

The highlight for me? Definitely the early morning yoga and meditation on the beach at Holland America’s private island, Half Moon Cay. An estimated 800 women laid on purple yoga mats stretching along the beach as far as the eye could see, and with the Nieuw Statendam shining just off shore, only the sound of the waves broke the silence of the gathering for an hour-long guided yoga and meditation. It was truly magical. Whether you’re a fan of Oprah or not, being part of that community in that beautiful setting epitomized for us the Oprah mantra of living your best life.

And sitting on our balcony each night, my girlfriend and I, who have known each other for almost 30 years, looked out at the sea and the stars while we reminisced about the day, laughed at how exhausted we were, and marveled at how lucky we were to have been here.