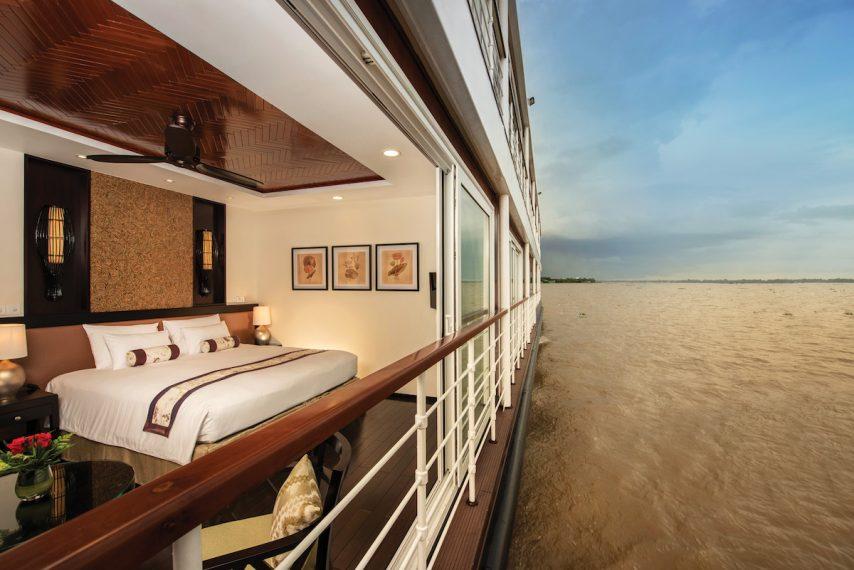 Pulling in to Siem Reap, we pass by markets, restaurants, and a church —establishments that would seem commonplace in any village. Except this one is floating. During the rainy season, Tonle Sap, the largest freshwater lake in Southeast Asia, swells more than five times its size. Stilt homes sit like jungle gyms along the banks and barges painted in vibrant shades of mustard yellow and electric blue bob as peacefully as lotus flowers along the water’s surface.

Out of the 14 ships sailing on the Mekong River, which stretches from the Plateau of Tibet to the South China Sea south of Saigon, only vessels with 9 feet of draft can cruise through the lake. Avalon Waterways’ new Suite Ship, Avalon Saigon, is one of the few (the others take the lengthy six-hour road route). I hopped on the 18-suite ship, the sister to Avalon Siem Reap, in Ho Chi Minh City, which locals still refer to by its former name, Saigon. Vietnam’s largest metropolis is pulsating with energetic bars and trendy cafes, but a cocktail at the infamous Rex Hotel (site of press briefings dubbed “the Five O’ Clock Follies” by journalists during the Vietnam War) was the only taste of Saigon’s nightlife I needed; we were here for the river, not the rooftop bars.

Ninety percent of the population in the Mekong Delta lives off agriculture, carving the river into fish farms and floating factories for sampans, the flat-bottomed wooden boats that serve as a common mode of transportation — as well as a makeshift home for fishermen. Avalon Saigon’s rounded bow is modeled after the traditional Irrawaddy Flotilla ships from Myanmar, which once transported rice on the delta. “We didn’t want to just build a mini version of an Avalon ship in Europe; we wanted it to fit this environment,” says Pam Hoffee, managing director of Avalon Waterways, as we approached the border to Cambodia. “Our goal was to have a modern design, but we also wanted to bring in influences from Vietnam and Cambodia.”

Part of what makes this ship feel like home is its size. The design is similar to Avalon’s European ships with the brand’s signature Open-Air Balconies and floor-to-ceiling panoramic windows that span the entire length of the suite. The difference here, however, is in the numbers. All suites measure an impressive 245 square feet (compared to 200 square feet on the European ships), with balconies stretching 14 feet wide. Retractable screens ensure your bedroom is bug-free at night, and sumptuous beds (Avalon’s custom-designed Comfort Collection Beds, complete with a pillow menu of course) look out at the river, making you forget there’s a flat-screen TV in the room. When you’re ready to relax after dinner, you can catch the nightly feature film like Catherine Deneuve classic, Indochine.

The part that makes the ship seem more like a floating hotel than a stuffy barge? The fact that you can sport slippers everywhere from the spa (yes, even with just 36 passengers, there’s a dedicated spa suite) to the living room–like lounge area, where the bartender prepares sweet Vietnamese iced coffee better than most spots back in Saigon.

Strolling through the streets of Vietnam is like stumbling upon one smorgasbord after another. Even in the tiny villages we visited, we saw families huddled around stands selling roast corn or slices of freshly cut mango. If you’re not quite ready to brave the street food, you’ll find a more refined version on board whipped up by the ship’s Cambodian chef. Breakfast and lunch are both served buffet style, but lunch includes a locally inspired dish prepped at a live station (the Siem Reap lemongrass sour fish soup is top-notch). Dinner is a three-course affair — plus soup, which, in Southeast Asia, gets its own course — announced by…