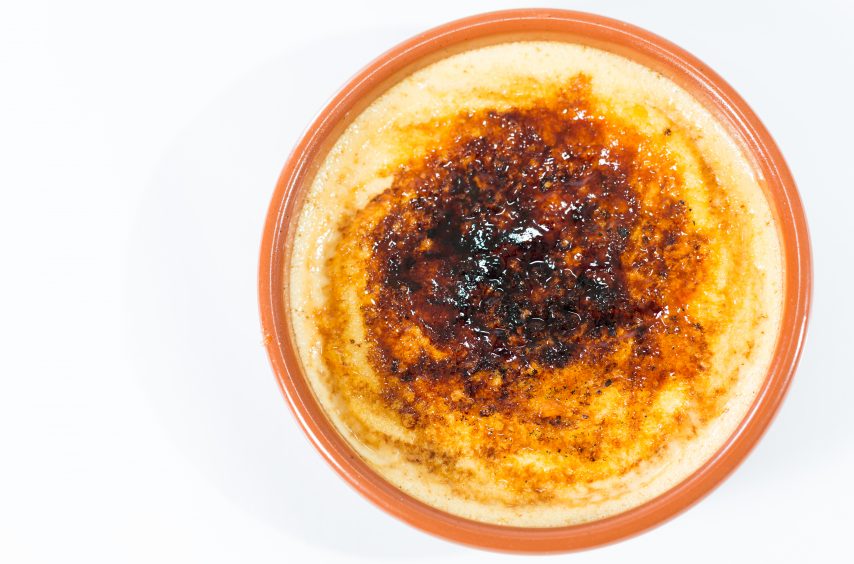 There I was, thinking home-made crème brûlée would be an ambitious undertaking. I was a tad intimidated by all those accent marks and doodads in the name and then, if that wasn’t enough, I discover you’re supposed to attack the thing with a blowtorch before serving.  I was nearly convinced that I’d have to wait to board one of Star Clippers’ romantic, tall-masted sailing ships before indulging in this decadent and luscious dessert under a riot of billowing sails with some exotic lands beckoning in the distance.

But, hey! These days, I have nothing but time on my hands so I figured I’d give it a go. And I discovered it’s easy—like, seriously easy with readily-accessible ingredients and a simple technique.  Best of all, the blowtorch is optional! A minute under the broiler will melt the sugar that tops these heavenly little desserts and transform it like magic into a sweet and crisp candy-like shell.

Set pot or kettle of water on high heat to boil.

In a medium saucepan over medium-high heat, pour cream and add vanilla bean, which should be split and scraped of seeds, all of which goes into the cream. Once it boils, remove pan from heat. Then remove vanilla bean shell from cream.

In a large bowl, energetically whisk the ½ cup sugar and egg yolks until the mixture becomes frothy, thickened, and a light golden color.

Slowly add, in three or four increments, the vanilla cream to the sugar-egg mixture.

Evenly pour the mixture into 10 ramekins.

Pull out oven rack halfway. Place a large deep-edged baking or roasting pan on oven rack. Place the 10 filled ramekins inside the pan. Then carefully pour the boiling water inside the large pan so that the water rises approximately halfway up the outside of the ramekins, creating a bain marie (hot water bath). Gently push the rack into the oven, closing the door.

Bake approximately 40 to 50 minutes or just until the custard is set. The custard should be firm at edges but still wobbly in center. Turn off oven.

Carefully remove ramekins from pan in the oven to counter. Once cooled to room temperature, cover each ramekin with plastic wrap and chill in refrigerator for at least two hours or overnight.

Approximately 30 minutes before serving, remove ramekins from refrigerator, placing each on a small serving plate. Sprinkle one tablespoon of sugar atop each custard ramekin.

Then, using a kitchen blowtorch, finish your crème brûlée (which means “burnt cream”) by melting the sugar until it forms a crisp, candy-like, golden-brown topping. Or place custard ramekins under broiler for one minute or so to form the topping. Serve immediately.