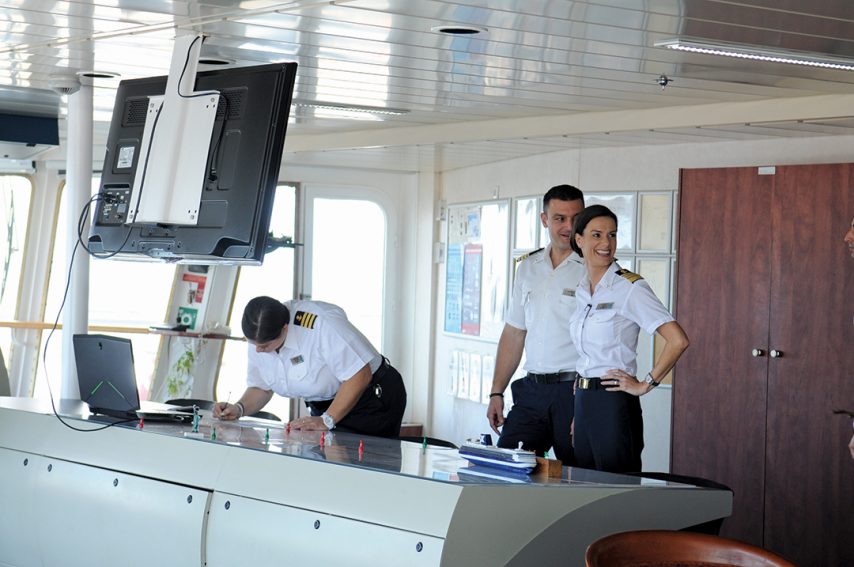 A Day in the Life of Captain Kate McCue

6–7:30 a.m. — Captain McCue’s typical sea day begins with a workout routine of yoga, body-combat exercises, and a walk of up to an hour around the outer deck. On port days with an 8 a.m. arrival time, she arises at 5 a.m. to fit in this routine before heading up to the bridge.

McCue was always active. She was an age-group swimmer while growing up in Augusta, Georgia; captain of her high-school swim team; and lone woman on the California Maritime Academy water polo team (just eight women were in her graduating class of 60). Even now, she participates in one active excursion on each cruise — whether it’s snorkeling or ziplining —“because I don’t recommend anything to guests that I haven’t tried myself.”

7:30 a.m. — McCue consults with officers on the bridge regarding navigation, ship traffic, and weather issues. If it’s a port day, she stays to oversee docking, when at least six officers are at her side reporting to her. Then she has some fun during guest announcements by always slipping in a made-up “Confucius” quote. On the day we spoke to her it was: “Girl who sets high goal will reach the summit.”

Captain Kate McCue rose through the maritime ranks as smoothly and steadily as the passage of the 965-foot ship — which accommodates up to 2,158 guests and 952 crew members — that she now commands. She first stood watch on ships for two months at the end of each year at the Academy. After graduating, she worked her way up on Disney Cruise Line and Royal Caribbean International cruise ships from third mate (watch assistant on the bridge) to first mate (head safety officer) to staff captain (the number-two in command, responsible for the health, safety, and security of all guests) on….