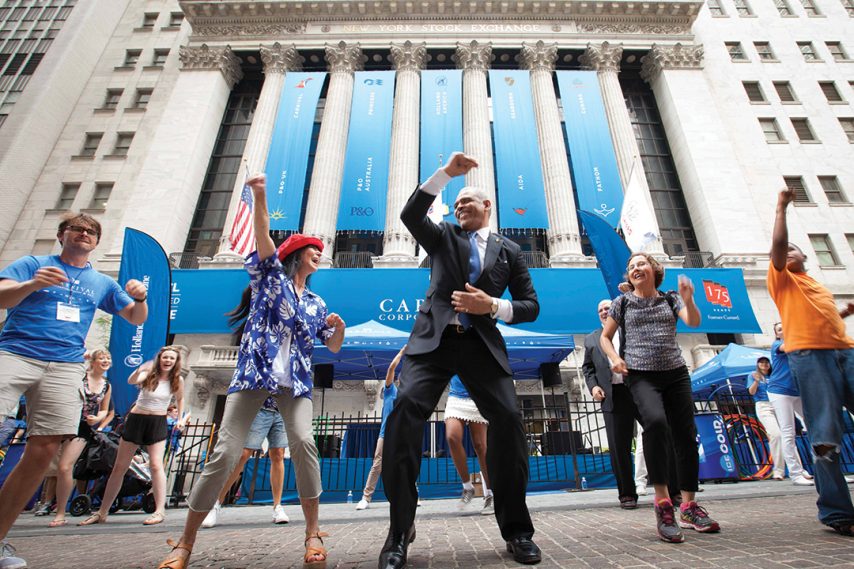 A Day in the Life of Arnold Donald

During a typical week, which will eventually end at home in Miami, Arnold Donald puts in thousands of miles visiting multiple cities and ports. He shakes countless hands and answers thousands of questions. And despite his much-deserved reputation as a tough-minded, results-focused business executive, he is also the very visible and charismatic ambassador for the world’s largest cruise company.

As CEO of Carnival Corporation, Arnold Donald (“just call me Arnold”) presides at the helm of its 10 cruise brands: Carnival Cruise Line, Holland America Line, Princess Cruises, Seabourn, Cunard Line, Costa Cruises, P&O Cruises UK, P&O Cruises Australia, AIDA Cruises, and Fathom. That equates to at least 200,000 people at sea on his ships on any given day. It’s his attitude of realism and inevitability that keeps Donald the cool, confident, and in-control leader of the $16 billion company.

Family Fun
While the bottom line is certainly a major goal of any CEO, one of Donald’s objectives is also an internal one — to affect a cultural change among the 10 brands at this 44-year-old cruise company as well as at Carnival Corporation’s headquarters in Miami, where Donald has made working together as a family of brands a priority. Having them cooperate, share information, and even have fun together is key.

“The impact Arnold has had on employees since he started has been incredible,” says Roger Frizzell, Chief Communications Officer at Carnival Corporation. “His enthusiasm and energy are infectious. Arnold always says we’re in the business of making fun and how can that not be fun? People are proud to work here.”

Donald’s personal style is remarkably approachable for his more than 120,000 employees. In fact, he’s usually the one doing the approaching first. “How are you doing today? What do you do here?” he’ll say to whoever happens to get on the elevator with him. Stepping onto an elevator with the well-known CEO, who is usually surrounded by his staff, would be intimidating to most employees, but Donald’s genuine, friendly, and yet authoritarian manner is enough for most to feel connected even in a brief elevator ride. “Keep smiling!” is his typical….

This is an excerpt only. To read this article in its entirety, pick up an issue of Porthole Cruise Magazine, or check out our digital edition. For a deeper look, watch the video below.