With such luxurious culinary offerings on Luciole, who wouldn’t want to gorge on the barge? 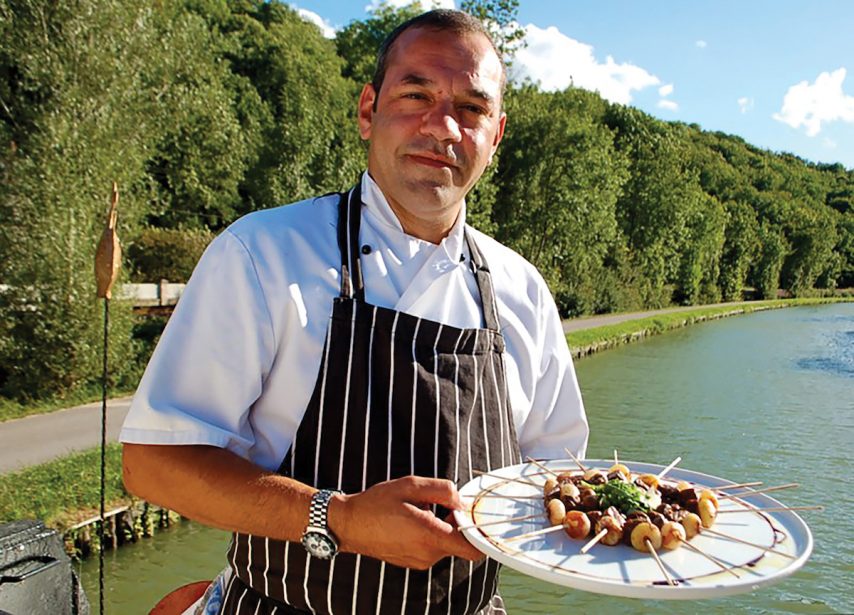 Driving through the rolling fields of the French countryside, I was already getting hungry. We were headed south of Paris in the direction of Auxerre, where, beneath the city’s ancient gothic cathedral, hovered Luciole — the barge patiently awaiting our small group’s arrival for what was slated to be an exceptionally delectable cruise through one of France’s most famous gastronomic regions: Burgundy.

Located in the center-east of the country, Burgundy is most commonly associated with the prestigious wines of Côte de Nuits, Côte de Beaune, and Chablis. However, it’s also considered the cradle of French cuisine, where many of France’s time-honored classics, like beef bourguignon, coq au vin, and escargots à la bourguignonne, were born. The grumblings of my stomach amplified as we exited the autoroute A6 and descended the Yonne River, inching closer to our floating culinary paradise.

Built in 1926 as a mule-drawn freight barge, Luciole was converted into a hotel barge in 1966, making it one of the oldest hotel barges in France. It was bought in 1976 by writer and European waterways expert John Liley, who selected Burgundy’s picturesque Nivernais canal as the base for his beautiful vessel. Today, Luciole is managed by his wife, Penny, formerly the barge’s chef.

Due to their small size, barge cruises inevitably offer guests a more custom dining experience. However, having trained at the Le Cordon Bleu and cooked for the likes of Grand Prix Formula 1 racing drivers and schoolmasters of England’s esteemed Eton College, Penny has placed gastronomy at the forefront of Luciole, leading it to become one of France’s top gastronomic cruises. So while Luciole doesn’t offer a specific “theme cruise,” its gourmet culinary offerings are so highly food-focused that no other cuisine-theme cruise could match them — and that no serious foodie should dare miss.

A 6-day cruise on Luciole is like being aboard a floating French bistro. Penny works closely with the barge’s chef to design a sophisticated menu of French cuisine with a dash of contemporary flare. The seasonal dishes are made of the best local ingredients, including herbs grown on the barge’s deck and the occasional basket of garden vegetables shared by passing lockkeepers. As we pulled to a halt in front of the barge, we were all eager to get a taste of this purported culinary phenomena.

After settling into our cabins and freshening up, we got to know our fellow passengers, the crew, and Penny herself over dainty petits fours (confections) and kir royal, an apéritif invented in Burgundy made of crème de Cassis liqueur and sparkling wine from a vineyard we’d visit. It was a delicious start that temptingly whet our appetites for more of what was to come.

Sitting down at the salon’s gorgeously laid table, gasps of delight greeted our first dish, presented by our talented chef, Jade Ennis, as pan-seared scallops served with roasted shallot purée — so divine it simply melted in our mouths. Our palates were further marveled by the main course, French favorite canard à l’orange accompanied by dauphine potatoes, leeks, kale, and a red wine sauce. This palatal ecstasy was accentuated by perfectly paired wines from boutique wineries of Chablis and the surrounding Yonne Valley.

What would a French meal be without a cheese course? Throughout the week we’d try over 20 varieties. On this first evening, we enjoyed some Comté and Valençay before finishing off with a Banoffee cheesecake with caramelised banana and coffee or some local Marc de Bourgogne digestif. This welcome dinner set the bar high and we all had visions of these sublime dishes dancing in our heads as we slept snuggling in our cozy cabins.

Waking up the next morning, and ….