“Chopped” and Delicious on Norwegian Getaway 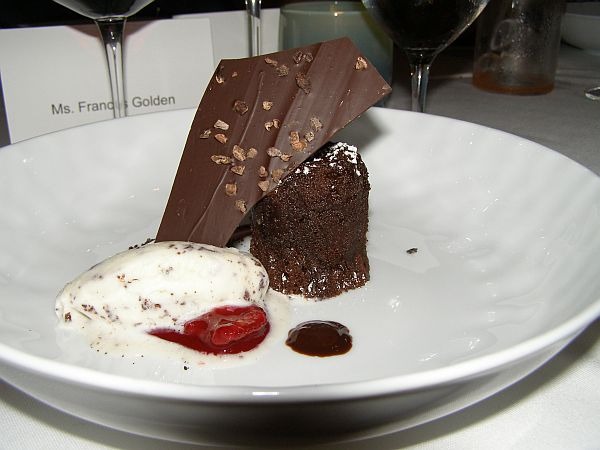 Fans of Food Network’s Chopped know New York chef/restaurateur Geoffrey Zakarian as the smart judge with white hair who opines on creations by the show’s competing professional chefs. Some lucky cruisers on the new 4,000-passenger Norwegian Getaway‘s inaugural Caribbean cruise got to turn the tables on the judge … sort of.

At a special Chef’s Table for 12 in Zakarian’s contemporary shipboard seafood venue Ocean Blue, foodie cruisers paid $130 to check out the judge’s own creations (paired with wine), and spend quality time with the Food Network star.

Zakarian, dressed in pink shirt, blue blazer, and tie, proved to be both a talented chef (no surprise!) and a nice guy – his roots in Worcester (Woo-ster), Mass.

Standing at the head of the table he carefully explained each dish – calling the black sea bass “the real deal,” describing cooking eggplant on a plancha, and waxing poetic about olive oil.

After an amuse-bouche of salmon tartare, we sampled a glistening tuna crudo with cracked coriander, the chef making sure our Champagne glasses were full.

A heavenly risotto of broiled Caribbean lobster and hon shimeji mushrooms was downright sinful, the sample portion finished with several tablespoons of butter and generous amounts of Parmesan cheese, plus good olive oil, and served with a sauvignon blanc.

We switched to a California viognier for the wonderfully light dish of black sea bass with roasted eggplant and marinated tomatoes, topped with vinaigrette made with basil seed.

Sea scallops were lightly roasted and served with caramelized pork belly, lettuce, and a fried white anchovy, a play on a Caesar salad with a little grapefruit flavor cutting through the richness – the accompanying wine a Barbera d’Asti.

Dessert was a chocolate course that the chef insisted we accompany with espresso loaded with cognac.

The Chef’s Table guests were more than pleased. This chef will not be chopped.

Zakarian, whose New York restaurants are The Lamb’s Club and The National, also gave cooking classes on the inaugural cruise, packing the ship’s main theater with fans, and posed for photos in the ship’s atrium.