Welcoming Sunrise with a Splash 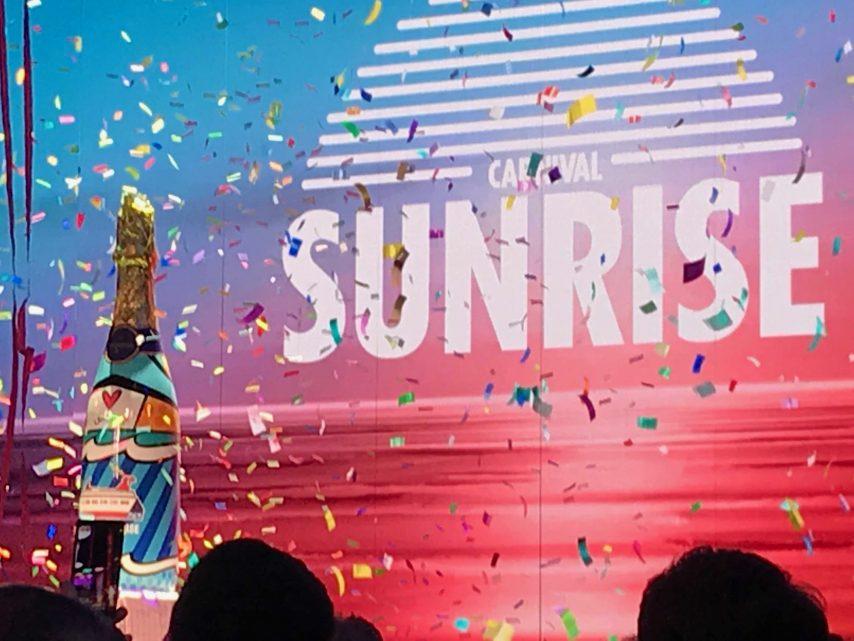 “Cuervo Makes the Sunrise” was Cuervo Tequila’s ad slogan when I was a teenager and I’d like to apologize now to the good folks at Cuervo for the poster I swiped off the subway when I was about 16. A poster with an image of a frosty tequila sunrise and a headline that bore my surname was just too hard to resist.

Now, so many years later, you might say that Cuervo literally made the sunrise on May 23, when I attended the naming ceremony of Carnival Sunrise in New York City.

Originally Carnival Triumph, a $200 million refurbishment spruced up the 20-year-old girl, adding some of Carnival’s trademark dining, drinking, entertainment and activity options like Food Network Star Guy Fieri’s Guy’s Burger Joint and Guy’s Pig & Anchor Bar-B-Que Smokehouse, the vintage-pharmacy-themed Alchemy Bar, WaterWorks Aqua Park and Serenity, an adults-only oasis that we grown-ups will be hightailing it to after a couple of hours at WaterWorks with a gang of excitable kids.

Fleet Week was in full swing as I made my way up to 12th Avenue to find Carnival Sunrise’s red, white, and blue stack peeping up among the battleships. The whole Carnival gang was there: Brand Ambassador John Heald, Carnival President Christine Duffy, Carnival Corporation CEO Arnold Donald, and even Kathy Lee Gifford, who I’m not sure has a title anymore. In fact, even a couple of members of Carnival’s extended family — Neil Polumbo, President of Costa Cruises and Holland America’s Master Chef Rudi Sodamin — were spotted in the audience.

Kudos to Carnival for not asking Kelly to sacrifice a bottle of Dom Perignon as part of her godmotherly duties (when I have a ship, I’m drinking the Dom and using a $9 bottle of Asti Spumante to christen the thing). Instead, Kelly uncorked a massive, vividly decorated champagne sculpture created by pop artist Romero Britto which released not foaming bubbly but confetti—A LOT of confetti–that rained down on the stage and the audience. Sunrise guests will be able to purchase smaller versions of the gorgeous bottle in the ship’s gift shop with proceeds going to Kelly’s favorite charity, the Ehlers-Danlos Society. (Just another example of Carnival’s far-reaching philanthropic work, which includes raising more than $16 million for St. Jude’s Children’s Hospital, contributing to national and international relief efforts during crises and doing some really nice stuff for veterans and the homeless.)

Once Carnival Triumph was officially Carnival Sunrise, it was time for lunch: for me, a superb New England crab cake with roasted pepper remoulade to start and delectable burned butter grilled branzino with avocado wasabi mousse to follow. I skipped dessert, not because I wasn’t tempted by the Cocoa Pastry Brick being served, but I really had to head back to work.

Carnival Sunrise will sail from New York, Norfolk, and Fort Lauderdale during her first year on the waves and I’ve no doubt that she’ll be a gloriously intoxicating experience — with or without the tequila.