A Grand Entrance for Celebrity Edge 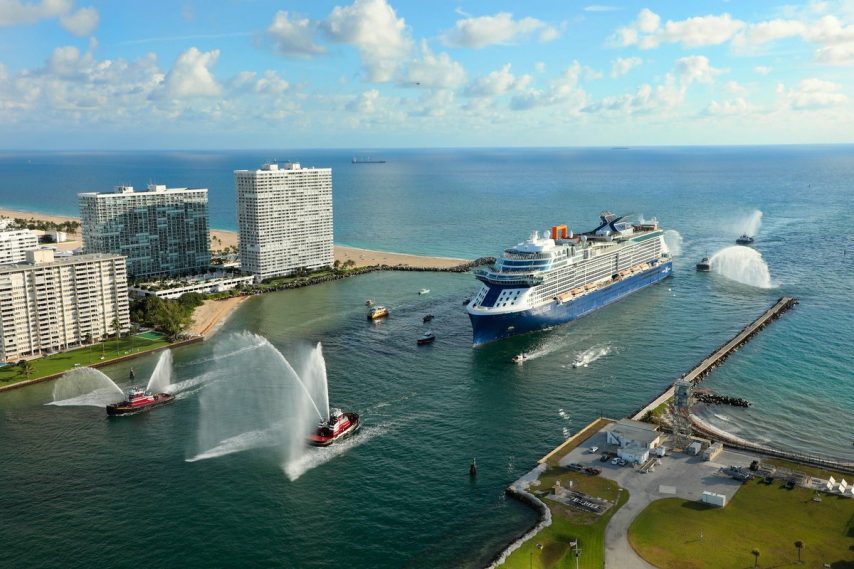 For the first time, Port Everglades Terminal 25 has a tenant: Celebrity Edge. The newest ship in Celebrity Cruises fleet sailed into Fort Lauderdale, FL, yesterday, her new home for cruising to the Caribbean. It took the ship 15 days to sail across the Atlantic Ocean from the French shipyard where she was built.

Richard D. Fain, Chairman and CEO of Royal Caribbean Cruises LTD was on hand to celebrate the occasion.

“The arrival of Celebrity Edge today book-ends a major chapter in the growth of Celebrity Cruises. It’s the culmination of years of dreaming, designing and dedication to bring this magnificent ship to life. A new era is truly upon us” he said.

Fain was joined by President and CEO of Celebrity Cruises, Lisa Lutoff-Perlo, who echoed Fain’s thoughts on the time and effort the new ship represents for the cruise line.

“The completion of her first-ever trans-Atlantic crossing and arrival at T25 marks such a historic moment for Celebrity Cruises. This has been more than four years in the making. The collaboration and effort between teams across the world all comes together in this incredible moment” she said. “I can think of no better place to be than with Captain Costas and the crew of Celebrity Edge knowing that we are sailing into the future, literally and figuratively, with this beautiful ship.”

After Celebrity Edge pulled into her berth for the first time, Lutoff-Perlo and Fain hosted a grand opening ceremony in the revolutionary new terminal. Attended by key brand executives and officials from Broward County and City of Hollywood, the exciting ribbon-cutting ceremony marked the official grand opening of the first terminal designed exclusively for the Celebrity brand, dubbed the new home of modern luxury.

Celebrity Edge begins her inaugural season sailing alternating seven-night eastern and western Caribbean cruise itineraries, with her Maiden Western Caribbean voyage departing on December 9, 2018, and her Maiden Eastern Caribbean voyage departing on December 16, 2018. Then, in spring of 2019, Celebrity Edge crosses the Atlantic again to offer guests stunning vistas of the Mediterranean with a range of seven- to 11-night sailings visiting iconic cities, including Barcelona and Rome.