A rendering of Celebrity Beyond | Photo: Celebrity Cruises 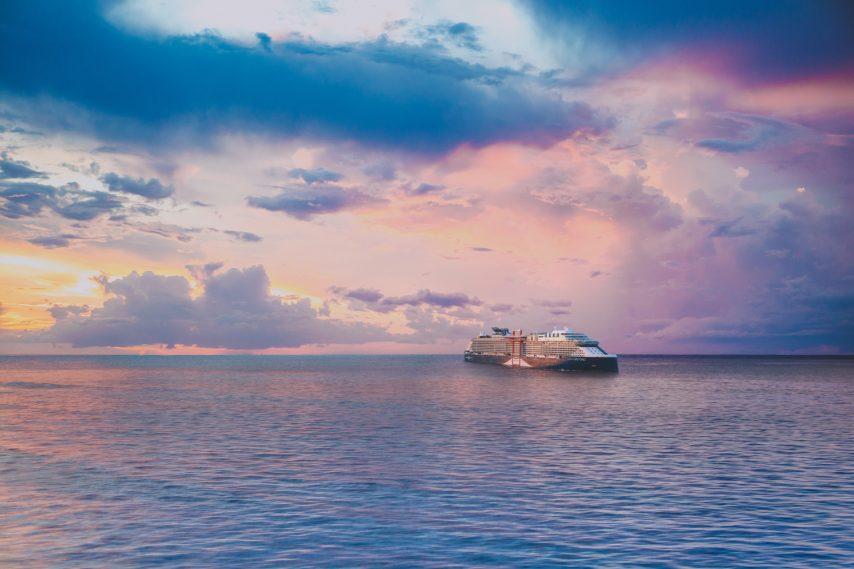 In a virtual event today featuring CEO Lisa Lutoff-Perlo and hosted by TV host and lifestyle contributor Tommy DiDario, Celebrity Cruises introduced the next ship in their Edge-class series – Celebrity Beyond.

Coming in 2022, Celebrity Beyond is the sister ship of Celebrity Edge and Apex and the third of five overall Edge-class ships the cruise line is planning to build. The ship is currently under construction at the Chantiers de l’Atlantique shipyard in Saint-Nazaire, France.

The event featured a question and answer session with Lisa Lutoff-Perlo and some of the world-renowned designers and partners who helped design and build the new ship. Joining Lisa was a handful of designers and partners to discuss their contributions to the ship, including newly name Wellbeing Advisor actress Gwyneth Paltrow! 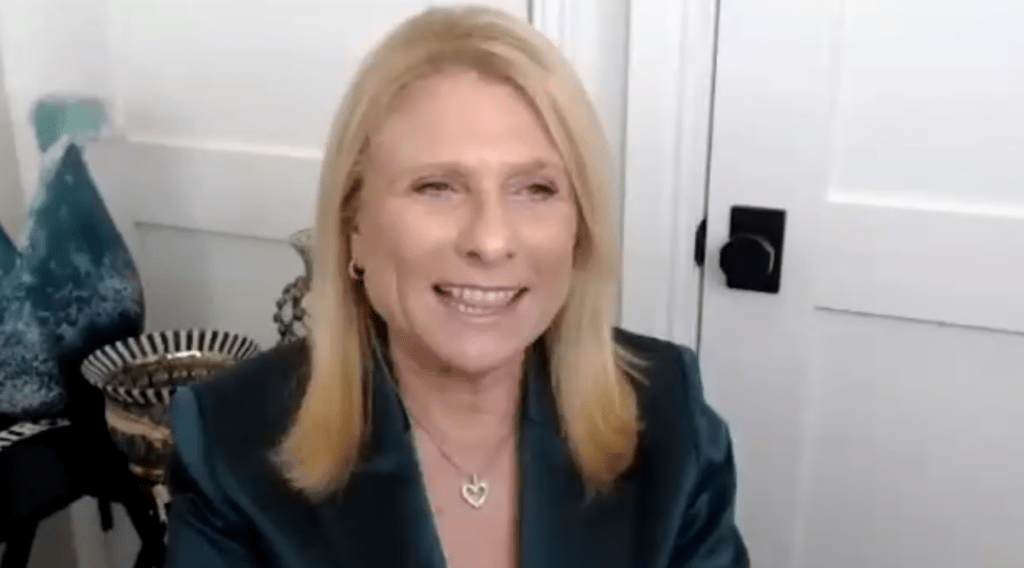 Throughout the presentation, one of the things speakers kept coming back to was the size of the ship and what they did with that extra space. Celebrity Beyond is larger, both in height and length, than both Edge and Apex and for designers like Tom Wright, Kelly Hoppen, Nate Berkus and Sanjit Manku, that meant more room to work with.

“Celebrity Cruises has always been an innovator at sea, and now we have challenged the status quo with a vessel that goes beyond expectations, beyond imagination,” said Lutoff-Perlo. “Celebrity Beyond shatters any and every preconceived notion of the cruising experience. This exquisite ship offers a journey at the intersection of elegance and approachability filled with what’s important to our guests today: forward-thinking design, culinary excellence, unparalleled well-being and incomparable service.”

According to designer Tom Wright, Celebrity Edge served as the prototype for the new ship. “I think when we designed edge, we realized we had hold of something really fantastic,” Tom said.

However, they did find plenty of places to improve, like the top deck, for example. The design team added wind spoilers on the top deck which sends the wind away from guests so they can enjoy the space more.

Kelly Hoppen, who also worked on the design team for both Edge and Apex, likened the process to upgrading a room in your home. Much of the space parameters are the same, but you have the opportunity to give the area it’s own unique look and feel. Kelly also explained how she wanted to create little zen areas around the deck space where people could unwind and have some time to themselves.

“All of these spaces are so integral to the ship and people’s experience. For me, the design project became all about this idea that every day someone’s going to feel different and want to do something different but always want the ultimate holiday. So, there’s music, drinks and places to come together but also cocoons and places of solitude. The beauty of this ship is that there is so much opportunity to be who you want to be,” said Kelly.

We’re tuned into @CelebrityCruise‘s new ship reveal and the amazing @LisaLutoffPerlo is giving the update!

The first detail? Celebrity Beyond will be larger (longer and taller) than both sister ships Edge and Apex! #CruiseIndustry #CruiseNews #Travel #Cruise #Vacation pic.twitter.com/1219Nz9xFq

One of the most important new features on board the ship is a restaurant from Chef Daniel Boulud called Le Voyage. The design of the restaurant is very unique with guests appearing to dine in their very own lanterns for added privacy and a softer ambiance. 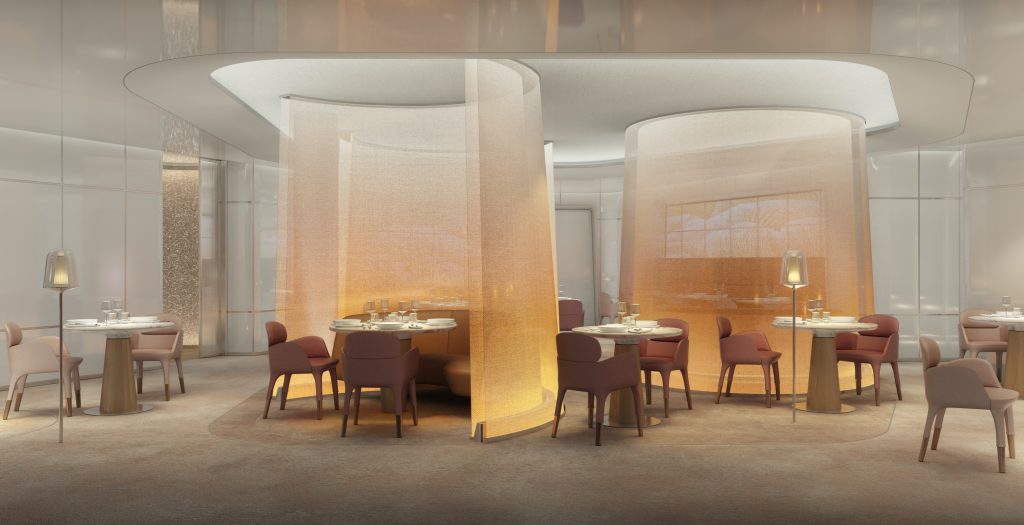 Le Voyage restaurant on board Celebrity Beyond

“Le Voyage will be a culinary journey like no other and will reflect the flavors of the destinations the ship will visit. The menu will be grounded in the DNA of my French roots, but, at the same time, it’s going to be very adventurous. My goal is to create a wonderfully comfortable environment where the food is center stage. I want this to be the most special restaurant at sea,” said Chef Boulud.

The event was graced by the presence of a bonafide A-list celebrity when Gwyneth Paltrow joined the broadcast to announce she’s the new Wellbeing Advisor for the cruise line. Her lifestyle brand Goop has been involved with Celebrity Cruises for some time, but now Gwyneth and goop will be even more involved on board Celebrity ships. 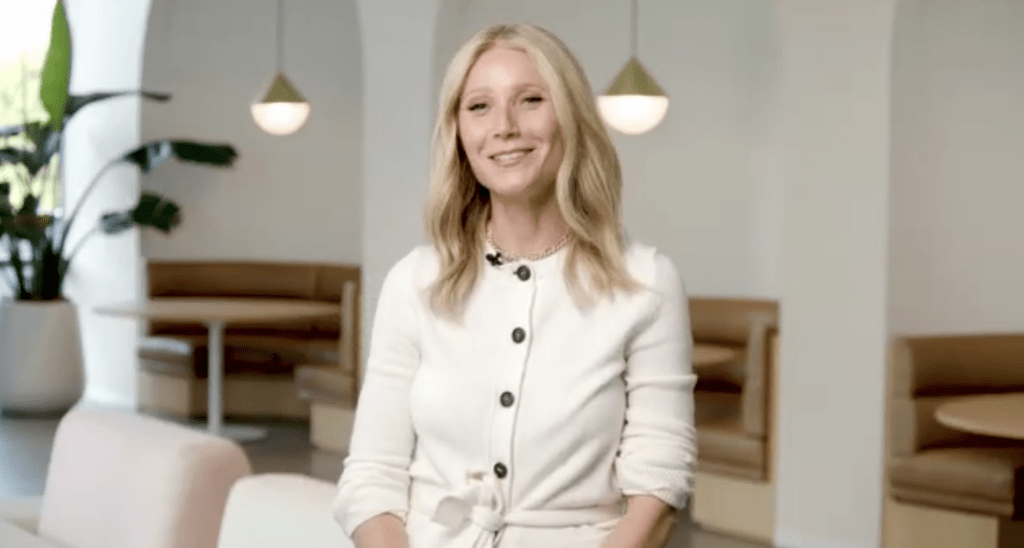 “At goop, our curiosity leads us to explore different approaches to well-being and sends us around the world, reporting on the best places to eat, drink, engage, and unwind. Near the nexus of these interests, we came across Celebrity’s mission to disrupt the traditional notion of being well-traveled. As Celebrity’s new well-being advisor, I’ll be working with my team at goop to bring onboard some of our favorite practices and tools for deepening well-being and joy,” said Paltrow.

Celebrity Beyond will debut on April 27, 2022 from Southhampton, England before heading to Barcelona for summer sailings. The ship will then head across the pond to Fort Lauderdale, Florida to kick off its first Caribbean cruise season on October 25, 2022.