Cruise Adventures in Curacao: 6 Spots You Have to See! 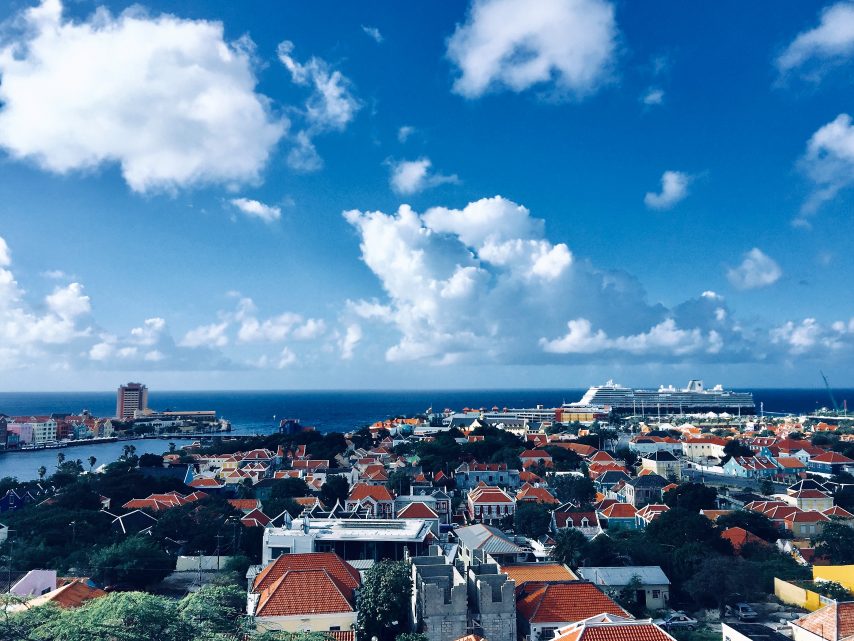 When I see Willemstad, Curacao on a Caribbean cruise itinerary, I’m immediately excited –the name alone acts like a hook and I invariably read on. Cruise-passenger-friendly Willemstad, the capital of Curacao is an architecture-buff’s delight –I’m  one!– and the island, a constituent country under the Kingdom of the Netherlands, also lures visitors with warm aquamarine waters and world-class scuba and snorkeling. I have visited five times –the latest aboard Holland America’s Koningsdam this past winter—and have always had a “prachtige” time (Dutch for “wonderful)!

Here are my six must-sees on a Caribbean Cruise to Curacao:

1. The unique architecture in traditional Dutch style but cool ice-cream Caribbean colors. The lovelysoft colors in Curacao’s buildings were reportedly the result of the headaches the then governor of Curacao, Aruba and Bonaire, Albert Kikkert, suffered in the early 1800s when he was based in Willemstad. A doctor told the governor that the bright sunlight of the tropics, reflected on the stark white of most buildings, could cause the migraines, so the governor ordered the buildings to be painted in pastels. By the way, a tongue-in-cheek story that circulates in the island that the governor might have had an ulterior motive because he owned the island’s paint factory is incorrect as there were no paint factories in Curacao at the time, Anko van der Woude, a local architect who conducts architectural walking tours in Willemstad, told me.

One iconic sight, perhaps the most picturesque in all the Caribbean, and my first must-see, is of the row of the delicately-colored buildings with red tile roofs, and the Dutch-style architecture gabled houses overlooking St. Anna Bay, a waterway that divides the city of Willemstad in two and connects the Caribbean Sea to the protected Schottegat Bay. The historic center of Willemstad, where this row of buildings is located, was founded in the 17th century and is a UNESCO World Heritage Site since 1997 – which puts it in the company of the Acropolis in Athens and the Taj Mahal in India.

The Dutch style on the island is reflected in the clay roof tiles and the pitch of the roofs that is based on the Dutch climate with its snow, and the Dutch habit of using the attic, introducing dormer windows in the roof. With the passage of time, in addition to the change in the buildings’ color scheme to incorporate such cheery pastel hues as lime green, flamingo pink, turquoise, ripe-lemon-yellow and more, Willemstad’s traditional Dutch styles were also modified to accommodate the island’s dry and breezy climate, and Caribbean accents such as verandas, porches, fretwork, and shutters were added.

2. Historic Fort Amsterdam, built in 1635 to ward off pirates and to protect the island from threats from England, France, Spain and others. It is one of eight forts on the island, the best preserved one, and now the home of the governor of Curacao. Included in the list of World Heritage Sites, it has a cannon ball fired by Captain Bligh’s troops embedded in its southwest wall. 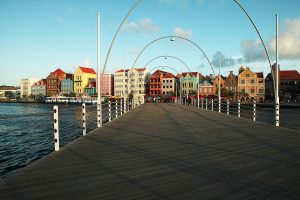 3. The Queen Emma Bridge, a floating bridge that unites the east side of the city, the Punda, to the west side, Otrabanda. This picturesque pedestrian bridge with 16 pontoons is hinged and swings to allow vessels to enter and leave the bay. It is affectionately called “the Swinging Old Lady of Curacao” by locals.

4. The Mikve Israel-Emanuel Synagogue in Willemstad, the oldest continually used synagogue in the Western Hemisphere built in 1730-32. It boasts stained glass windows, a carved mahogany ark and sand floors in remembrance of the 40 years the Jewish people spent wandering in the desert.

5. The Kura Hulanda is an anthropological museum in Willemstad that tells the story of the predominant cultures of Curacao. It chronicles the origins of man, the African slave trade, West African empires, pre-Colombian gold, Mesopotamian relics and Antillean art. 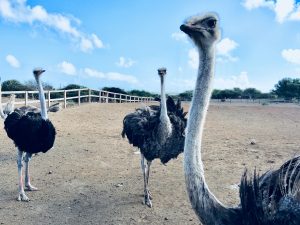 6. The Curacao Ostrich Farm. Ships offer this as an organized tour, which I took while on the Koningsdam, and on the way to the farm the tour stopped for photos at Riffort village for panoramic views of Willemstad’s city center, the narrow port entrance, the colorful Dutch colonial-style houses and Fort Amsterdam. At the farm, visitors ride a safari truck, and in addition to ostriches, they may spot monkeys, emus and Nile crocodiles. A stop is made to give everyone a chance to hand-fed the impressive birds –the adults are much taller than me—and we could see a cute baby ostrich. Sometimes lucky visitors can watch a huge ostrich egg hatch. And those who dare may try their hand at riding an ostrich –I was content with just looking at them and feeding them! A souvenir shop at the farm offers African art and other merchandise and at the Zambezi restaurant on-site you can enjoy an ostrich egg omelet, but please do not order the ostrich steak!