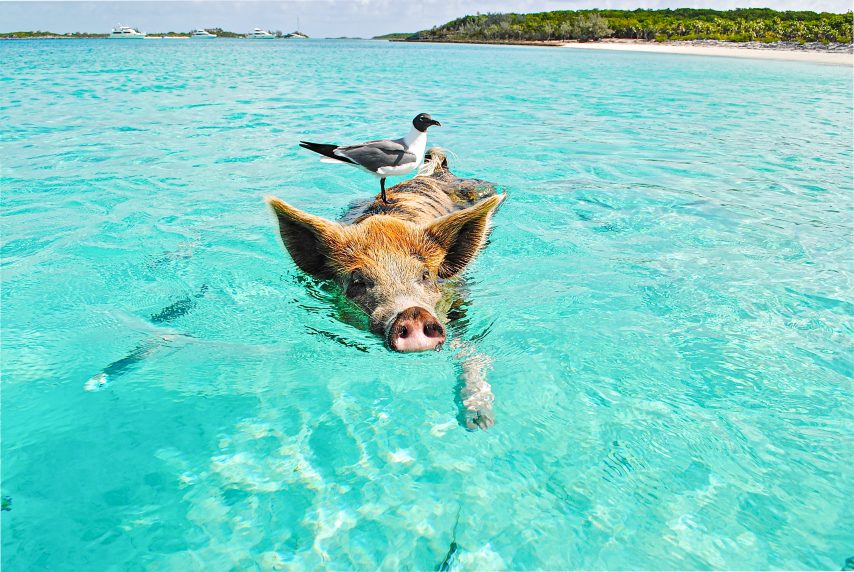 Welcome to the Caribbean, where thick, lush rainforests and turquoise waters play host to more than just your envy-inducing selfies. They are home to the locals — the fur, fin, and feather kind — that really are just as unique as the islands they inhabit. In fact, over a third of Caribbean animals can’t be found anywhere else in the world. So while you shop for souvenirs in the craft market or snap a picture of a pristine beach, be sure to keep an eye out for something truly one-of-a-kind!

The peculiarly adorable Cozumel Island coati is what you get when you cross an anteater with a raccoon. As the name implies, these cat-sized omnivores are unique to Cozumel and believed to have been brought over from the Yucatan Peninsula and Central America by the Mayas who used them both as a food source and as pets. Though their presence has declined in recent years, a small troop of them is famously seen at the San Gervasio Maya ruins site, foraging for fruits and insects on the grounds.

“The most beautiful bird in Jamaica, and some say the most beautiful bird in the world, is the streamertail or doctor hummingbird.” It’s the first line of the James Bond short story For Your Eyes Only. But even before Ian Fleming created his famous MI6 agent, this electric green hummingbird had captured the hearts and minds of the people. Chosen as the national bird of Jamaica, the streamertail is more often called by the local name “doctor bird” for its long outer tail feathers and black crest that resemble coattails and a top hat. The streamertail is the most abundant and widespread of Jamaica’s 28 native bird species, so you’re very likely to spot a flash of green darting from plant to plant in whichever part of the island you visit.

Vervet monkeys have lived on St. Kitts and Nevis for over 300 years — first brought over from Africa by the French as pets in the 17th and 18th centuries — and today there are thousands of free-roaming monkeys on the twin islands. These large, handsome monkeys spend most of their time on the ground, but their greenish-beige coats make them difficult to spot. Tourists often report monkey sightings on nature trails and rainforest tours where a troop of monkeys appears, seemingly out of nowhere, scurrying across the road. These troops can range from 20 to 70 individuals with an adult monkey leading the pack. If you’re lucky enough to catch them in a quiet place, like a private garden or remote beach, you can spend hours watching their highly organized social structure. If you’re close enough, you will hear a wide range of quiet vocalizations as they communicate with one another.

The most popular and thrilling eco attraction in the Cayman Islands is, no doubt, Stingray City. This group of natural sandbars a few miles off the shore of Grand Cayman is home to about 50 stingrays. You can stand in about three feet of water while swimming, feeding, and taking pictures with the friendly giants, which weigh about 150 pounds and span 5 feet in width! Timid visitors can admire these beauties from afar in glass-bottom boats, while the more daring can snorkel and scuba dive alongside them while exploring the nearby coral reefs.

When the sun sets in Puerto Rico, visitors and tourists alike are serenaded with the sounds of the male coquí frogs calling out, “Co-kee! Co-kee!” The song of this tiny, brown frog has been measured at 90 to 100 decibels, making it the loudest existing amphibian! You’re most likely to find coquí in El Yunque National Forest, where some locals have claimed it rains frogs. In actuality, the coquí climb high into the trees where tarantulas, their main predator, wait to eat them. Because the coquí are so light, they can jump from the trees and float safely to the ground. So, a word of warning — if you happen to be under a tree when they make their escape, you could get caught in a coquí shower!

Don’t hold your breath for flying pigs when you could be swimming with them instead.

The famous swimming pigs of the Bahamas have garnered influencer-type fame on social media and have become one of the most popular excursions for cruise ships. Some offer their own pig experience close to port, but the original pig island is Big Major Cay, reachable by boat from Nassau. How these pigs arrived here is still a mystery, but the main theory is sailors dropped them off to eat later and never returned! Today, you can spend an entire day interacting with and feeding the pigs — with natural food provided by your tour guide — but try to take photos from afar, as the hungry oinkers may mistake your smartphone for a snack!