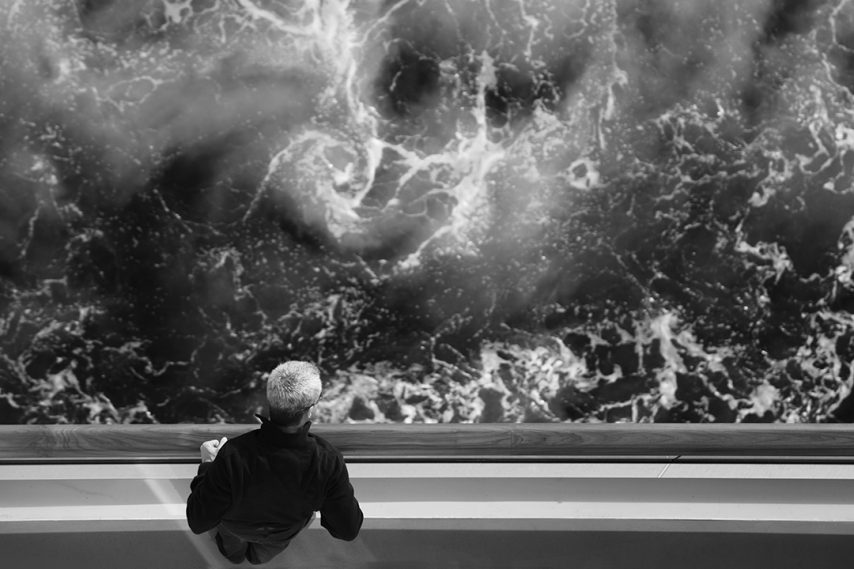 I am standing upon the seashore. A ship at my side spreads her white sails to the morning breeze and starts for the blue ocean.She is an object of beauty and strength. I stand and watch her until at length she hangs like a speck of white cloud just where the sea and sky come to mingle with each other.
Then, someone at my side says: “There, she is gone!”

“Gone where?” Gone from my sight. That is all. She is just as large in mast and hull and spar as she was when she left my side and she is just as able to bear her load of living freight to her destined port. Her diminished size is in me, not in her.

And just at the moment when someone at my side says, “There, she is gone!” There are other eyes watching her coming and other voices ready to take up the glad shout: “Here she comes!”
And that is dying.”

Father Connolly recites that poem as Rosemary and I stand at the stern of Holland America Line’s Veendam watching the ship’s wake churn the sapphire-blue waters that surround Bermuda. In my hands is an urn containing the cremated remains of my husband, Michael, who I had so happily shared my life with until his death three months ago at the age of 62.

Rosemary and I have been aboard Veendam for two days now and the Holland America experience — signature public rooms such as the Ocean Bar, Explorer’s Lounge, Crow’s Nest, and even the whimsical poolside dolphin sculpture — trigger memories that blur my last heartbreaking images of Michael lying in a hospital bed at the NYU Langone intensive care unit, monitors flashing a dismal prognosis.

Michael and I met in 1993 aboard Holland America’s Statendam, a 10-day inaugural sailing that called at Bermuda and several Caribbean islands. Now, in my mind’s eye, I see Michael during that cruise, smile flashing, eyes sparkling, as he leads a line dance while “Achy Breaky Heart” blasts through the disco’s speakers. I see him construct what looks astonishingly like a bra during a napkin-folding class that we accidentally found ourselves part of, and I hear his hearty laugh as I enter the Ocean Bar before dinner to find him with a Beefeater on the rocks before him and the bartender entertaining him with magic tricks. I see him, movie-star handsome, in a tuxedo on formal night, impeccable grooming, impeccable manners, and, always, always, that smile.

Ours wasn’t a whirlwind romance. Returning home from our Statendam cruise brought with it the reality that while we both were New Yorkers, the 90-minute distance between my Queens home and his Suffolk County, Long Island, one was considerable. But that distance was nothing compared to what was to come.

As much as that first Holland America sailing, Bermuda, the island that we’ll arrive at in just a few hours, will always play a starring role in our love story. I recall a phone call on a snowy morning in 1994, only a few months after Michael and I began dating, that he broke the news that he had finally — after a decade of submitting employment applications — been offered a year-long position in St. George’s and would be relocating to the island in two months. I smile now when I remember my fear that he’d never return and, to this day, wonder if he did return because of me (as he claimed) or simply because everything’s so darn expensive there that he could barely afford to eat.

During Michael’s time in Bermuda, I’d frequently sail into Hamilton as Veendam will today — one of the few ships that call at my favorite part of the island. Michael would meet me at the gangway and the two of us would climb aboard his moped and buzz through the winding, flower-lined lanes, me holding on to him for dear life and constantly cautioning him as we’d swing around winding curves, blind to any oncoming traffic. One time we arrived back at my ship and a woman summoned me to her car as I waited for Michael to return from parking the moped. “I’ve been watching you two,” she said. “He’s a very strong driver but you’re going to make him have an accident the way you hold his shoulders and keep pushing him every which way.” Typical female: I never told him about that.

It’s been six months — almost exactly — since we celebrated the 18th anniversary of the day we took our vows in the library of a cruise ship (where else?), walking down a red carpeted aisle to….

Let us know your comments!
#201#Burial at Sea#Holland America Line#January/February 2016