Cruise your own Endless Summer with the world’s seven most righteous surfing ports of call. 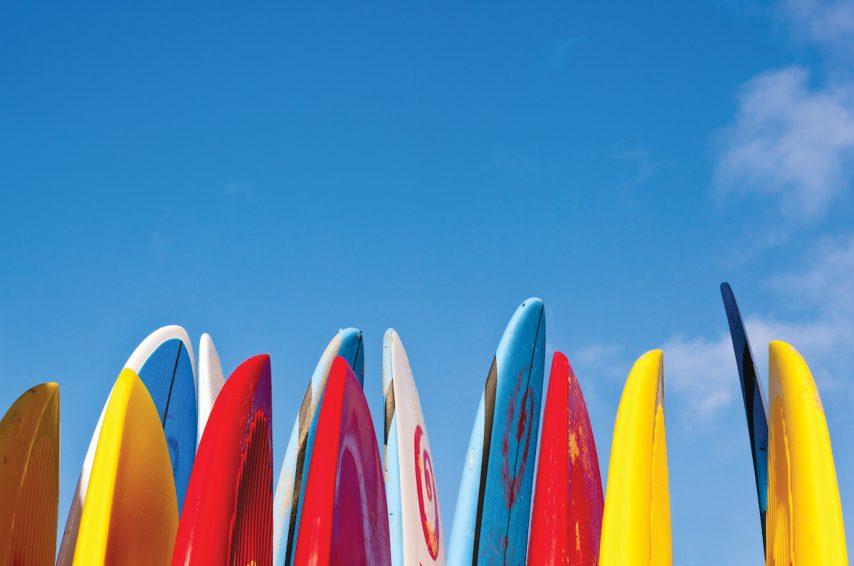 As the immortal Beach Boys taught us way back in 1961, “Surfing is the only life, the only way for me.” It’s nearly impossible to explain why the act of paddling out into the waves on a big, floating board only to have them push you back toward shore can be so all-consuming. You just have to try it for yourself.

Like any other group of obsessive fans, surfers have developed their own ways of talking shop (like, totally, dude!). Here are a few more useful technical terms.

Longboard: Any board over 10 feet in length, usually wide, stable, and easy to ride in smaller surf, though harder to turn and paddle out in larger waves. The classic surfboard of the 1960s and earlier.

Shortboard: Any board about the same length as its rider is tall. Typically, these are designed for fast maneuvers and “shredding,” with a pointed nose, more pronounced rocker and rails, and three skegs on the bottom (a configuration called a “thruster”).

Funboard or pigboard: A board longer than a shortboard but shorter than a longboard, usually between 7 and 10 feet, with a broad, stable spoon like a longboard’s but curved up like a shortboard’s for better turning. The board you’ll see most often at surf schools.

Gun or rhino chaser: A board designed for big waves, as long as a funboard but with a narrow body, sharp nose, and tail.

Rails: The rounded edges of the board — easier to feel with your hands than see with your eyes. They’re curved a bit like airplane wings to help the side of the board move through the face of a wave. Rounder rails make a looser ride; sharper rails cut into the water like a rudder.

Rocker: The overall curve of a board from tail to nose that determines how the board moves on the water.

Skeg: A fin, the thing that keeps a board from slipping sideways on the water.

Spoon: The curved portion of the nose, especially on a longboard.

Dropping in: The act of catching a wave, but also can describe stealing a wave from another surfer — a major faux pas for a visitor, whether done intentionally or not.

Gremmie, grommet, or gremlin: A beginning surfer. A newbie.

Break: The area where waves form. A “beach break” has a sandy bottom, with smaller, messier waves. A “reef break” has a harder bottom, forming taller peaks. A “point break” has waves peeling off the side of a jetty or other projection, often easier to paddle to and giving longer rides.

Face: On a good, surfable wave, this is the long, smooth portion below the lip where most of a ride takes place.

Gnarly: Turbulent, bumpy, intense conditions. From “gnarled,” as in twisted like old wood.

Lip: The part of the wave that curls over as the wave breaks; the part between the shoulder and the face (except in the case of a tube).

Set: During a good swell, waves will come in regular sets; for instance, three waves, then a pause, then another three waves, and so on.

Swell: An unbroken wave, or the weather condition that leads to wave creation; for instance, a storm off the Aleutians can lead to a northern swell in Hawaii.

Tube: A wave in which the lip curls all the way over the face, creating a hollow space inside which one can have a fast, thrilling ride. “Tubular,” by extension, means “good.”

Luckily, cruise ships visit some of the best places in the world to ride the waves. Beginners can book surf-school excursions to get their feet wet for the first time. More experienced riders can grab a board and go. Whatever your level, check out these, cruising’s seven best beaches for catching waves:

The beaches around Tauranga have lots of surf schools to teach beginners … and plenty to lure experienced riders into the swell as well. The waves at Arataki, only 10 minutes from the cruise port, break both left and right (whichever direction you’re comfortable riding) and will hollow out into tubes when the weather’s right — super fun without being super challenging. It’s a popular beach, so keep an eye out for swimmers.

One of the greatest surf lessons in the world is just sitting at one of the oceanfront cafés in Uluwatu and watching the locals take long, apparently effortless rides on waves that seem consciously designed with surfers in mind. You can also rent boards to experience bliss yourself. Kuta Beach might be closer to the cruise port in Benoa, but the long, easy swells of Blue Point Beach are more than worth the 40-minute drive.

San Juan’s beaches host dozens of surf schools, mostly on the eastern side of the city. Playa Aviones, for one, has world-class waves only 12 miles east of the port. But try getting away from the crowds by heading to the national park 25 miles to the west (outside the city traffic, it takes about the same time). At Cerro Gordo, there’s a well-traveled public beach ideal for stand-up paddleboarding and snorkeling, but if you walk to the east end of the beach, up the hill by the campground (which has many shaded picnic tables), you’ll find a more secluded cove. The ground is rocky, and pay attention to signs listing local conditions, because the area does have occasional rip currents. The break off the point is more than worth the walk.

The same underwater canyon that makes Cabo San Lucas a perfect deep-water port also funnels long swells toward the beaches. The result: big, fast waves. Zippers, at the southernmost tip of the Baja Peninsula, is the famous break here — but local crowds and overhead wave-sizes make it a little forbidding for newcomers. About 30 minutes north of Cabo is Old Man’s, also known as Playa Acapulquito — easy waves, predictable breaks on the reef bottom, so a perfect spot for all levels to ride, with surf hotels and schools nearby.

The west side of the Punta Del Este peninsula boasts a sheltered bay with calm waters; the east side is home to Uruguay’s famous Hand in the Sand sculpture and waves that can literally be described as “tubular.” La Boca is where the Rio de la Plata empties into the Atlantic, creating some interesting sand bars, which in turn make great waves — when the weather is just right. But at Playa Brava, the waves are more consistent, and the beach is right downtown, near restaurants, shops, and other tourist highlights. Expect a sandy bottom with few rocks and peaks between 2 and 7 feet that occasionally form fast, fun tubes.

Cruisers calling on Kauai have a lot of Hawaiian culture to look forward to, including some of the friendliest waves on the planet. Fun for beginners and pros alike, the southerly swells at Poipu Beach are smooth and consistent. It’s easy to understand how the sport could be invented on these islands if this is what the waves are like! A handful of surfing schools are ready to introduce anyone to the wonder of catching a ride. Even if all you want to do is watch, the sand is soft, the trees are shady, the curving coastline creates natural wading pools, and there are shops, bars, and eateries within easy walking distance.

If you’re lucky enough to have your ship call on Moreton Island (or overnight in Brisbane), you’ve reached a water-sport paradise. In addition to fishing, beachcombing, and diving the Tangalooma Wrecks, you can also take a board up to Yellow Patch off the Bulwer North Point Road, where a series of sandbanks create long, right-handed breaks with impressive views of the sand cliffs.