Back Home Aboard QM2 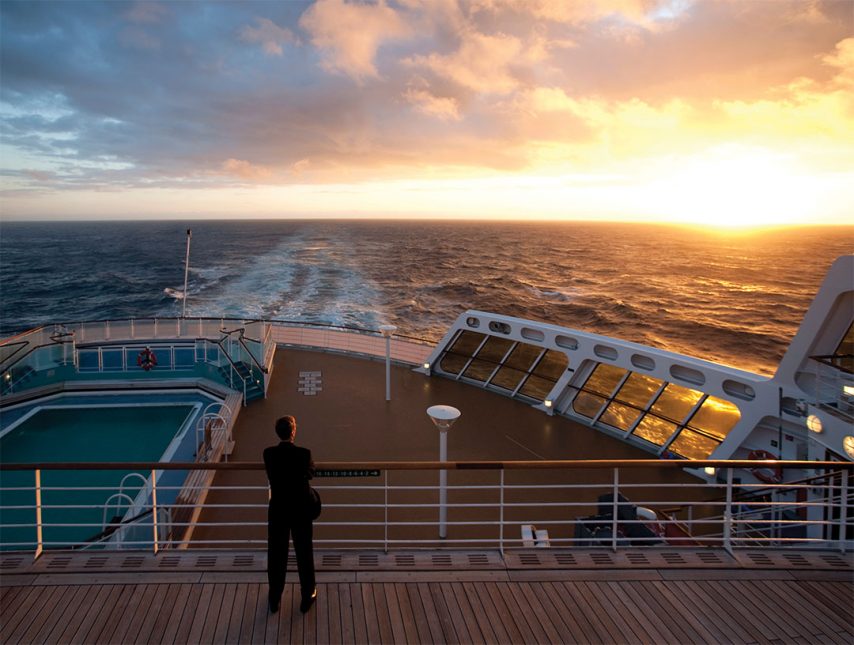 A meaningful crossing aboard Queen Mary 2

The boom of Queen Mary 2’s whistle was meant as celebratory, heralding the start of a new voyage. To us, it was a mournful farewell to familiar shores. As we sailed away under grey skies from Southampton — and, more broadly, Europe — the drizzle settling on our cheeks certainly masked a tear or two. For my wife, Kathryn, and me, there were conflicting emotions as we set sail for New York.

For two adventurous, eye-opening years, we had lived in Istanbul, where we enjoyed hikes in Oman and ski weekends in Italy. From our apartment, we gazed across the Bosphorus, and the Hagia Sophia and Topkapi Palace defined our skyline. In New York, the only skyline from our apartment was a neighbor’s brick wall; returning home was not the joyful affair we had anticipated.

To help transition ourselves from the Old World to the New, we decided to go over land and sea. Packing our bags and dashing off to the airport, only to land 11 hours later at JFK airport, couldn’t capture the enormity of our move. Instead, we traveled by train across Europe in three days, took an overnight ferry to the UK, and then boarded Cunard Line’s Queen Mary 2. At least, we reasoned, we could look forward to being on the ship.

I was returning home in two fashions. From QM2’s launch in 2003 until 2008, I spent eight months a year on board as a deck officer, eventually leaving as the liner’s chief officer. Except for a brief one-month contract in 2010, I had not sailed on the ship since. Still, I maintained friendships with many crewmembers and was eager to experience the ship for the first time as a guest.

Once underway, there came to be a certain comfort of inevitably. We knew, sailing down the Solent into the English Channel, that our departure from Europe was set. Kathryn and I couldn’t decide midway that we wanted to stay in Turkey and extend our contract by six months, as we had already done once. The possibility to turn around was no longer in our hands.

Every hour of the crossing brought us farther away from Europe and closer to Manhattan. For the first few days, our minds inevitably leapt to Istanbul and what we were leaving behind. We shared messages with our friends there, who, in return, dutifully sent us images of the city we still clung to.

The distance traveled steadily increased at 20 nautical miles per hour. After we passed the midpoint of the crossing, and Newfoundland seemed almost on the horizon, a mental switch was thrown. Suddenly, New York seemed not only plausible, but imminent. Instead of being wistful, we became…