With American Queen Steamboat Company®, your next great vacation isn't far away. 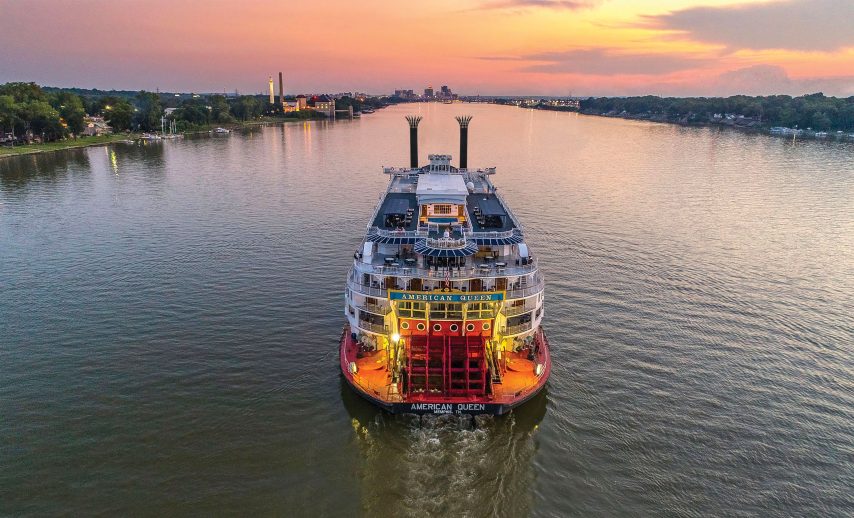 There’s something beautifully consistent about a river. A living embodiment of water’s never ending journey through our ecosystems, rivers provide life in ways no other body of water can. Each stripe carving its way through the landscape has a story to tell about discovery and adventure. Hearing these stories is one thing, experiencing them firsthand is quite another.

River cruising in the United States often takes a backseat to the famous rivers of Europe, but Americans may not realize how close they are to a luxury river cruise vacation, no matter where they live. American Queen Steamboat Company is one such provider of American river cruises and the itineraries they curate are as diverse as the rivers on which they cruise.

Has the cabin fever taken over yet? If you’re someone who used to love exploring the world and all its adventures, then the past few months haven’t been easy. However, just because you can’t galavant across the globe right now doesn’t mean you can’t take the trip of a lifetime right here in America.

American Queen Steamboat Company created a new program of itineraries they’re calling “Come Home to America” and the goal is simple: help homebound cruisers get out and experience something new in unprecedented safety and unparalleled comfort.

America’s rivers wind their way all over this great nation but unfortunately many haven’t thought about the opportunities to cruise on them. River cruises in America from American Queen Steamboat Company offer the same elegance and prestige as river cruises in Europe but without having to go far from home. With itineraries in three distinct regions, you’re never far from enjoying the history and opulence of American Queen Steamboat Company’s iconic paddlewheelers.

In his 1883 novel Life on the Mississippi, Mark Twain wrote “the Mississippi Valley is as reposeful as a dreamland”. Twain used his travels on the river to highlight a region uninterrupted by the hustle and bustle of the coasts, and here we are more than 100 years later, that experience still exists.

Life in the middle operates at a slower pace. A Lower Mississippi River cruise is the perfect way to immerse yourself in the South where hospitality is ingrained into the culture. 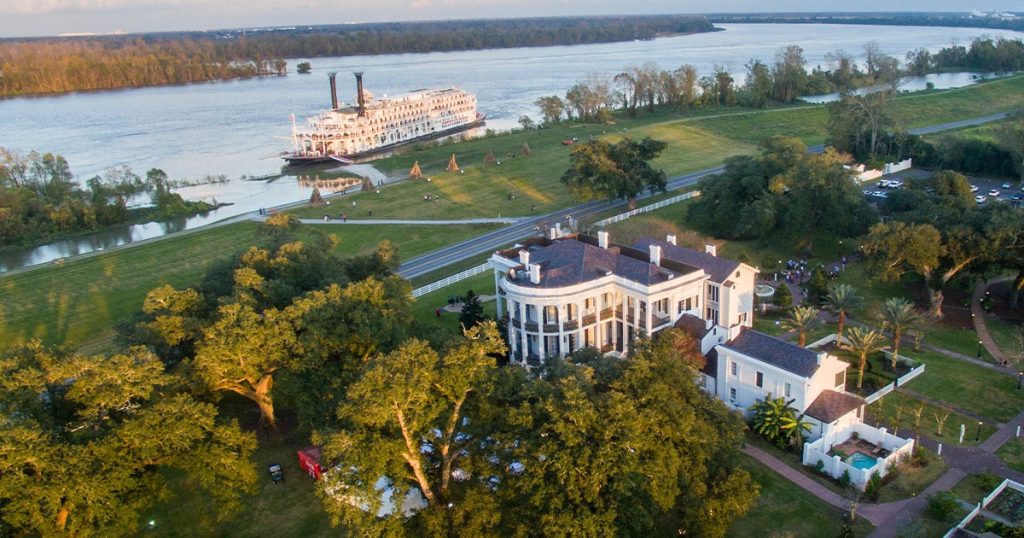 American Queen Steamboat Company draws on the traits of the region to craft Mississippi River cruise itineraries steeped in history, culture and authentic experiences. Guests peering over the ornate white railings of an American Queen Steamboat Company vessel like the American Queen® are privy to gorgeous scenery and wildlife convening on the river banks. From your morning coffee to an after dinner drink under the stars, the river provides a backdrop unlike any other.

Words like legacy, tradition and heritage are often used in conjunction with the Might Mississippi thanks to the many small towns and iconic American cities dotted along its banks. Itineraries are molded into journeys of exploration and discovery from the very northernmost section in Minneapolis to the Gulf of Mexico. 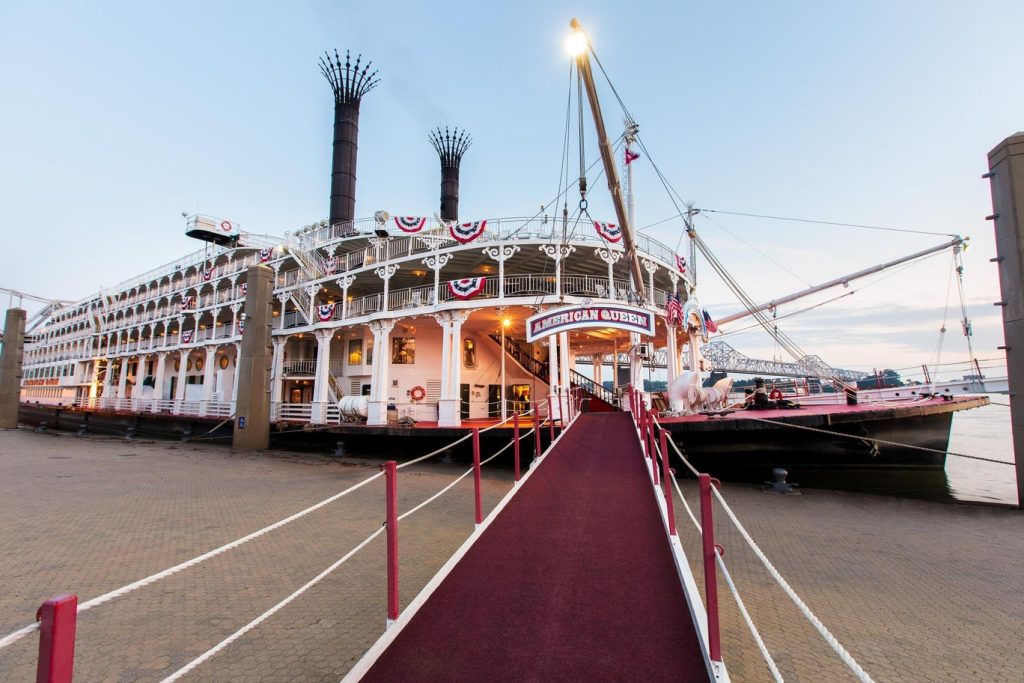 What sets the river apart from the rest is the charms of each city. Places like Memphis, New Orleans and St. Louis drip with identity and flair. Each city is distinct in its culture, cuisine and style, giving each day of the trip its own sense of adventure and discovery. Meet people who have lived for generations along the riverbanks and glimpse into how it shaped their present, past and future. The Mighty Mississippi is waiting for you.

Have you had the privilege of experiencing the heartland?

The center of America is criss-crossed by flowing rivers and railroads headed West. The history of the region is one of pioneering and unwavering courage. From cities entrenched in industrial spirit like Pittsburgh to the sounds of Americana in rhythmic Nashville, the Ohio, Tennessee and Cumberland Rivers are gems just waiting to be explored. Each season brings its own charm to the region, from the soft pinks and greens of Spring to the Fall wildfire of color in the trees. 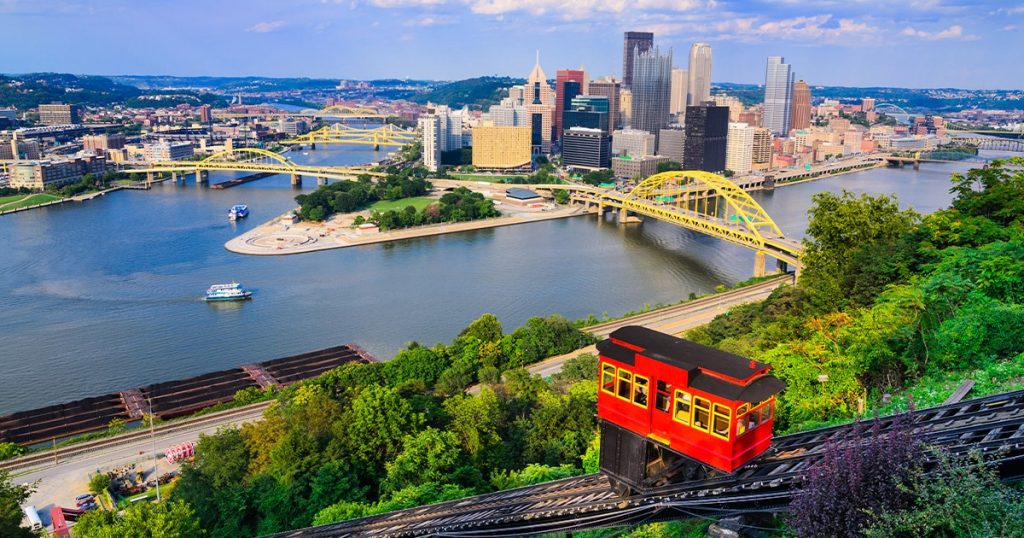 The whole region is a callback to when steamboat travel was the premier way to get around in comfort and style. Ships for purpose have given way to ships for pleasure, but the nostalgia remains. Itineraries immerse guests in iconic American traditions like the horse racing tracks of Louisville and the home of the King of Rock and Roll, Elvis Presley’s Memphis Graceland.

American Queen Steamboat Company makes visiting the heartland a joy, all you need to do is sit back and relax.

For those of you residing along the Golden Coast and Pacific Northwest, American Queen Steamboat Company offers their traditional paddlewheeler cruises along the Columbia and Snake Rivers. There’s beauty in the wild, but you don’t have to hike like Lewis and Clark to find it. 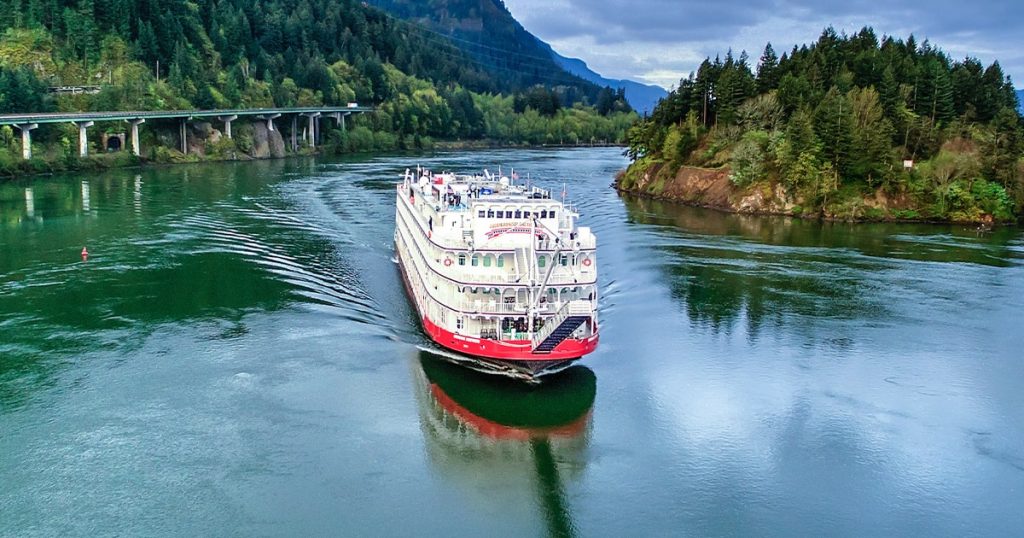 Washington and Oregon are truly states unadulterated by life in the modern world. From a private balcony on board the American Empress®, the towering firs and rolling hills of the Pacific Northwest pass by in unassailable serenity. Delightful views of snow capped mountains, plunging waterfalls and sprawling vineyards make for wonderful pictures to share with friends and family who won’t believe the trip you’ve taken was real.

The ship is adorned with art paying homage to the Native Americans who called the region home for hundreds of years. The menus onboard the American Empress showcase the many cultural and culinary influences of the region. Fresh ingredients coupled with local wine make for something much more than just a meal. 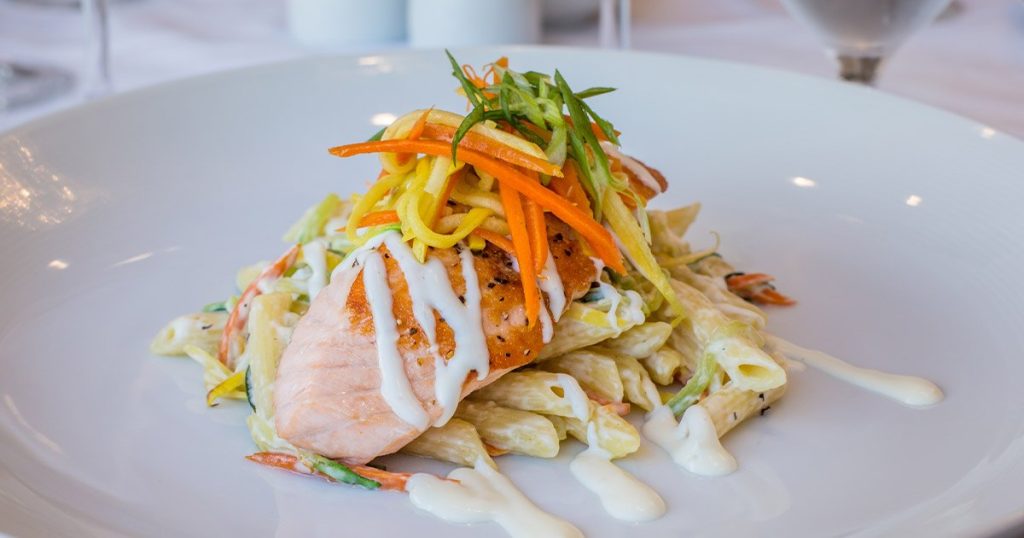 Cuisine as beautiful as it is delicious | Photo: American Queen Steamboat Company

Part of setting the standard for American river cruising means having vessels as iconic as the rivers on which they explore. American Queen Steamboat Company is on the verge of adding another gorgeous paddlewheeler to their fleet and the details coming out are enticing to say the least.

The American Countess will be the fourth vessel from the river cruise line and will feature the same classic look and feel guests have come to love, but delivered in a sleek and modern way. Featuring four decks and 123 attractive staterooms, there may not be a better way to cruise the Mississippi River in comfort and style. 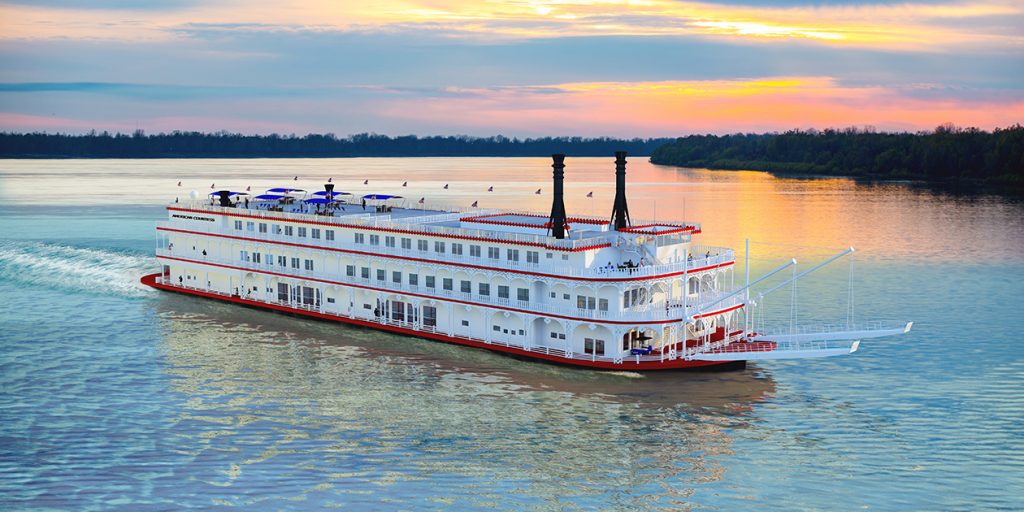 From the details released about the ship so far, it’s clear the same commitment to service, cuisine and entertainment will be at the forefront of every itinerary. Guests can expect fresh, local ingredients at every meal prepared by experienced chefs and served in the Grand Dining Room by an expert wait staff. There’s even another dining option, The River Grill, for those looking for a more casual dining experience. 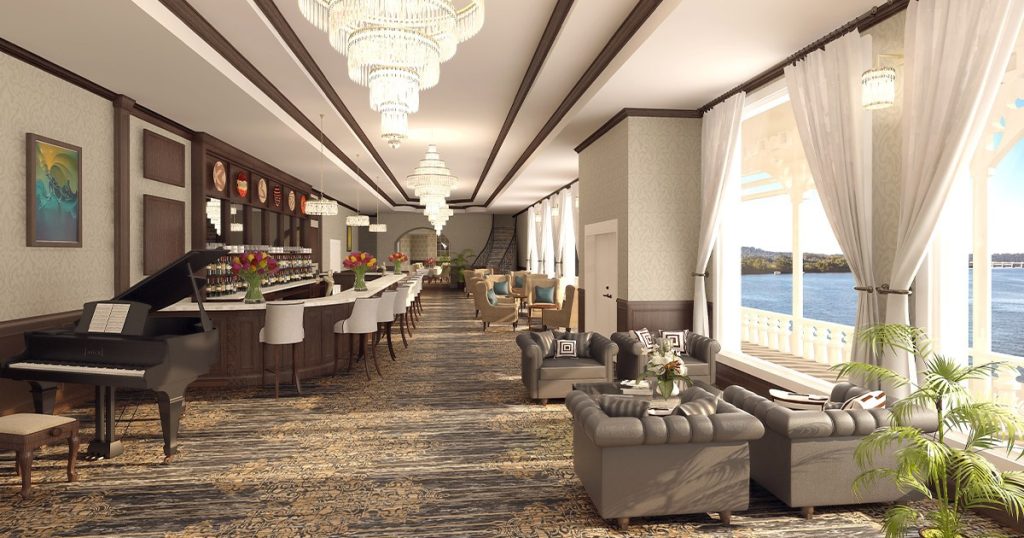 The Theater entertainment venue features live shows every night and the Fitness Center, Card Room and Sun Deck are wonderful places to spend time as the timeless beauty of America slides gracefully by.

If the unmistakable itch to travel finds itself consuming your day, an adventure on an American river is an option that needs consideration. With a variety of itineraries on some of the most famous rivers in the country, you’re not far from your next great close to home vacation.

This post was sponsored by American Queen Steamboat Company.