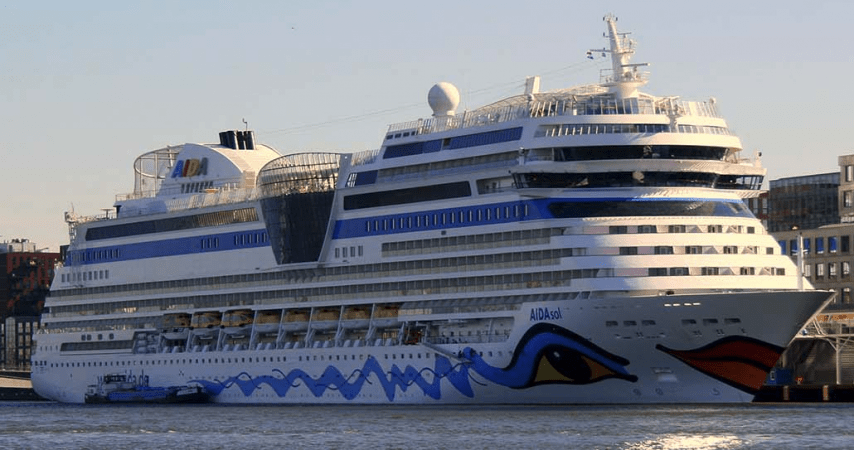 German cruise line AIDA Cruises has announced a new 117-day world cruise onboard their ship AIDAsol. Embarking on October 26, 2022 from Hamburg, Germany, AIDAsol will call at 43 ports in 20 different countries on four continents, pass the International Date Line and cross the equator twice. Guests have the option to participate in the entire journey or hop on board the ship at two other points throughout the cruise. The world cruise was originally scheduled to embark in October 2021 but the COVID-19 pandemic necessitated the rescheduling.

After embarking from Hamburg, the ship heads north up the Elbe River into the North Sea. From there, it makes course to South America with calls on the Canary Islands and Cape Verde Islands off the coast of Africa prior to crossing the Atlantic Ocean.

Once the ship reaches South America, it calls on Rio de Janeiro, Brazil, Buenos Aires and Ushuaia in Argentina, and Chile. From there, the ship continues west across the Pacific Ocean to Tahiti, Bora Bora, Tonga, Fiji, Vanuatu, New Caledonia and Australia to Mauritius. The ship will spend New Year’s Eve in Sydney, Australia.

The final leg of the journey crossed the Indian Ocean from Australia to South Africa and Nambia will calls on the islands of Mauritius and La Reunion. As the ship heads back to Europe, it will call on Tenerife and Madeira as well as Lisbon, Portugal and Cherbourg, France before returning to Hamburg on February 20, 2023.

Delivered in 2011, AIDAsol is the fifth Sphinx-class ship built by the cruise line. She features eight unique restaurants, 13 bars, the Body & Soul Spa, a sport court, a theater and even a brewery. The ship is very similar in size and style to her sister ship, AIDAblu.

Have you ever taken a world cruise? Let us know about the experience in the comments below!